The ART of Fine Breeding

If you’re intrigued by breeding philosophies and studied the “art” of programs such as Hanover-Hill, Ocean-View, Paclamar, Pabst, Dunloggin and other legendary greats, you know that developing exceptional cows and bulls rarely happens just by luck. While many claim they have a “hunch” when it comes to breeding cows or they rely purely on daughter performance, there’s actually a science to it as well.  That’s where Select Sires comes in. In June of 2008, the Select Sires Board of Directors (farmer-owned and controlled) met to talk about ways to help with the ever-increasing problem of inbreeding, while developing breed leading bulls with truly unique pedigrees. In essence, it was a group of breeders still intrigued by the art of breeding better cattle. The Aggressive Reproductive Technology (ART) program became a concept and then a reality just seven months later in January 2009. “We felt compelled to broaden our range of bloodlines to give dairy producers more options when making genetics selections,” said Jeff Ziegler, Genomics Program Manager at Select Sires. “We wanted to create additional genetic variation and also utilize genomic tools to slow the inbreeding growth facing the Holstein breed. Creating line-bred sires and using them on unrelated lines in the field will further ensure capturing each sire’s genetic superiority without the added weight of inbreeding depression.”

And so the goals of the ART program are quite simple:

-create matings for the FeedPRO program 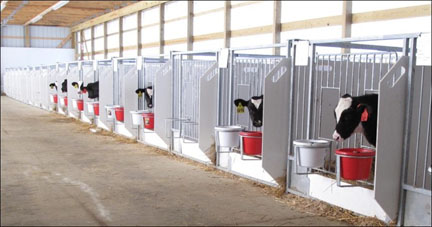 With the quickly growing capacity of the ART program, it wasn’t going to be long until the first results of the system would debut in the industry. Current ART developed bulls included 7HO13140 SYNERGY, 7HO13100 MARCHMAN, 7HO13094 TRENTON, 7HO13093 DAMARIS, 7HO13035 MODESTO, and 7HO13022 TATUM. Most recently, the #1 GTPI daughter proven bull in the breed following December 2014 proofs, 7HO11314 MOGUL, is also an ART program graduate.

According to Jeff, not all bulls will go through the ART program. “Bulls that are developed from females we own, or embryos we have purchased, are what constitutes ART calves available for PGA sampling. We have been using about 30% of our PGA sampling capacity for ART developed calves. It’s important to note, bulls coming from this program will complement, not replace, bull calves that we continue to purchase from seed-stock producers.”

In the end, whether you see a Hanover-Hill, De-Su, Regancrest or S-S-I prefix, you know that behind that pedigree is a person, a group, a cooperative that’s genuinely interested in breeding better, more profitable cattle. No matter how we get there, the collective growth of the industry will benefit us all.