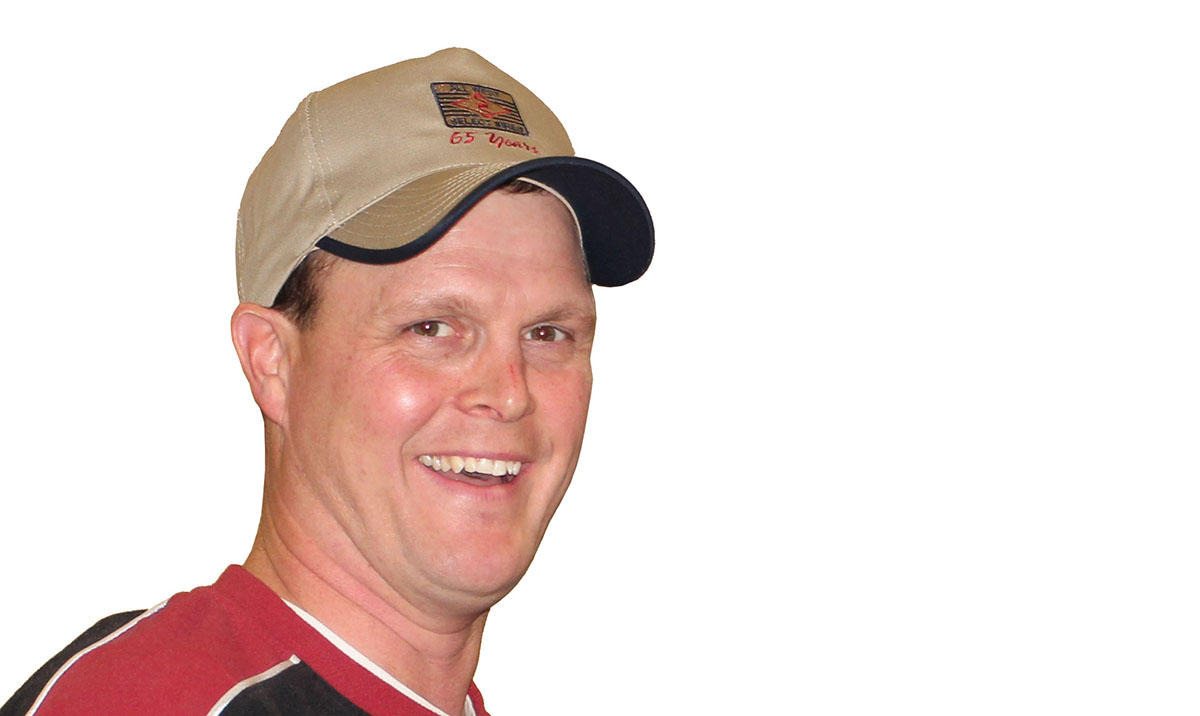 It seems only fitting that Dave Porter is awarded a certificate of service, because out of all the employees we have up and down All West Territory, there is none finer than Dave Porter to be a living example of service.  Dave was born in Deer Park, Washington, where the Porter family had a herd of Registered Holsteins.  His grandfather was Don Steffen, a long-time Executive Board member and secretary for All West from the Monroe area. Today, the family farm is run by Dave’s sister and brother-in-law.  While growing up, Dave was very active in 4-H, and after high school, he attended Washington State University.  Dave is a very proud WSU Cougars fan and his breeding truck even has the WSU Cougars logo on it – quite possibly the only one in Tillamook, Oregon, with that distinction!

Twenty years ago, this young Cougars’ fan was hired by All West to help Pat Brown in distribution and to do relief work for three technicians in Whatcom and Skagit counties.  When he had time off, he would drive a couple hours south to Corvallis where he visited his girlfriend, Denise Josi, at Oregon State.  Denise was from a prominent Jersey farm family in Tillamook, and the two met previously at a few collegiate judging events when he was representing WSU and Denise was representing OSU.

As fate would have it, the technician in Tillamook decided he wanted to fill a vacancy in eastern Washington, so Dave jumped at the chance to relocate, and the rest is history!  Dave and Denise got married and have three very active kids, Ryan, Robyn and Rose.  Besides homeschooling all three, the children have many 4-H and fair projects which include both dairy and beef, chickens, sewing….you name it and those kids can do it!  In her spare time, Denise is also quite an accomplished photographer and journalist.

In 20 years that Dave has been with the company he has done his job quietly.  He’s practiced service with a humble heart.  He even goes as far as providing two-time-a-day arm service…which is one of the many reasons his customers adore him.  His day starts at 6am goes to about 2pm and then he goes back out at 5pm and does the calls he has around the Tillamook area.

That presentation was given at the 2018 All West Annual Meeting as the Directors and Delegates of All West joined with the members of staff attending, to honor Dave for 20 years of service to All West.  Little did we know that three months later, we’d be saying “so long and best of luck” as Dave retires from being a technician.

The decision didn’t come easy, but arming cows for 20 years takes its toll on a body, and that, combined with the fact that Dave & Denise’s three children were growing up overnight, made the Tillamook couple decide that they needed a change.  This quiet, unassuming, results-driven family man will be missed by his teammates and customers, but how fortunate for us that he made his home at All West for so much of his life. 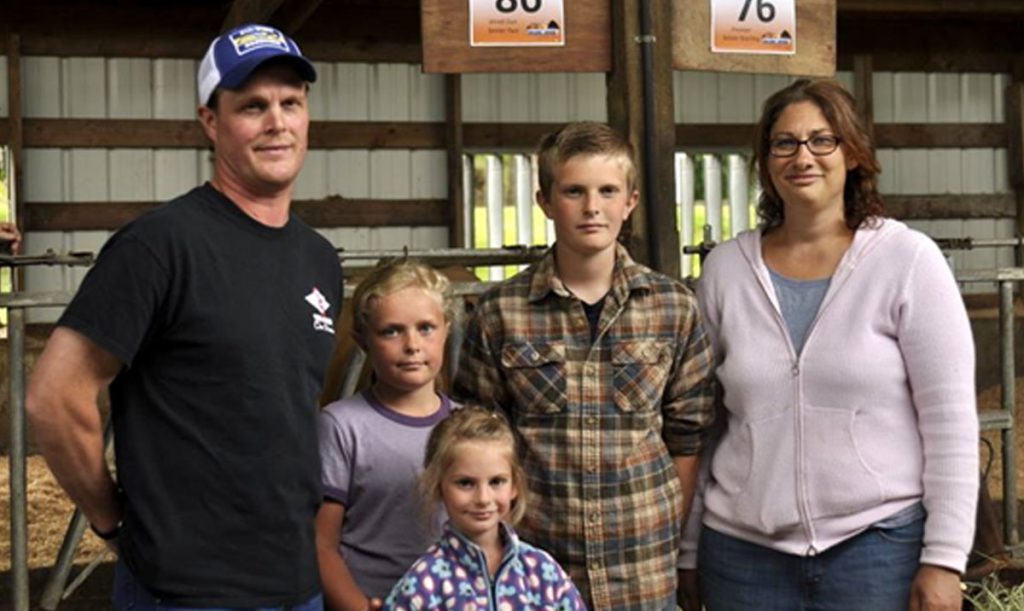 Beyond the official presentation at Annual Meeting, we had the chance to sit down with Dave and get some parting thoughts before he, and his family, move to northeast Washington to begin a new chapter in their lives.

All West:  What kind of results have you been able to provide for your customers?
Dave Porter:  There are some herds we’ve gotten that have progressed tremendously by using All West semen, through milk and conception rates.  There are some herds that we’ve made better by using high-type bulls and we’ve seen the results in their udders.  Maybe the greatest satisfaction didn’t come through great leaps and bounds of improvement (although that’s good) but through maintaining a level of excellence in those herds that were already great.  It’s hard to stay consistent, but knowing that all the semen they’ve used to do so has come out of my tank, well that’s great.  It’s a big responsibility to deliver results to people.  Their livelihoods are counting on me and the bulls I use to keep them profitable.  I’m glad we could continue providing bulls that will continue to get the job done.

AWSS:  How involved have your herds been with the SMS program?
DP:  – I would say 75-80% of my herds are on the SMS Program.  This helps tremendously to prevent inbreeding, but also to target traits that people need.  Components are obviously a big thing here in Tillamook.  The Creamery used to pay on fluid pounds, with big bonuses for components, then they paid just on components.  But now they pay on Cheese Merit because they wanted to make a better cheese.  We’ve been able to deliver what customers need to help with this.  If people ask me about the SMS Program, I always give them the option.  If a guy likes to mate his own cows and put in the time to study pedigrees and linears, then by all means, do it.  But if they don’t have the time, it’s so worth it to use SMS to not only keep inbreeding at a low, but to also give yourself every chance to improve genetics and the performance of your herd.

AWSS:  Do you have some favorite bulls you’ve used over the years?
DP:  I really liked 7HO3948 EMORY because he was a no-holes bull.  He had great type, great udders, milk and his components were good too.  He was a top of the line bull all the way across.  More recently, I really liked the 7HO5841 HI METRO daughters…except for their high rumps!  And lately, I personally liked the 7HO10506 ATWOOD daughters, although he’s such an extreme bull, he didn’t work well for everyone.

AWSS:  What are some funny memories from 20 years of service?
DP:  It’s hard to remember all of them, but some highlights were one of the days I had off, and Tillamook flooded, so J.R. Fisher, who was doing my relief work at the time, had to go to dairies in a boat!  I also remember a time that Select Sires was celebrating Elevation’s 50th birthday, and I had a dairyman ask to use the semen in celebration of it.  It just so happens that I had a straw and I told him it was no problem to use that.  Incidentally, I kept that empty straw as a part of history. 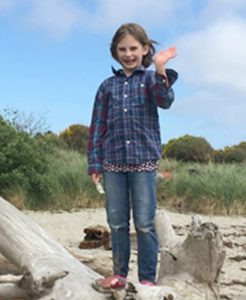 I’ve also had the chance to breed Longhorn cattle with a customer named Bob Larsen.  Having Longhorns in Tillamook is really unique in the first place, but to work with them was pretty interesting.  He bought and sold them at shows/sales across the country, and actually developed a flush program for them.  Now more and more Longhorn sales feature embryo packages and I’m pretty sure that’s because Bob starting doing it so long ago.

It’s neat that after 20 years of working in this area, I’ve become not only a trusted technician, but a member of the community, and someone who’s got the scoop on what’s going on in Tillamook!  That was pretty evident when I got a call from a vet who works close to Deer Park, WA, and he asked me for help in identifying a mystery cow that was dropped off at his place to be flushed.  Evidently, a trucker was coming back from the Jersey Show in Louisville, KY, and had explicit instructions to leave the cow there for some embryo work to be done.  There was no paperwork and so the vet was pretty confused.  I knew her right away!  Our neighbor, Shannon Lorenzo, had a great Jersey cow named Peg, who went to Louisville and won that year.  It had to be the same cow, and I was not only happy to help, but inwardly celebrating that my life is so entwined with the people of this area that I know their cows as well as them!  I’ve had the opportunity to know these people outside of work, and I even get to watch their kids grow up.  I’m very grateful for that.

Thank you Dave & Denise, and of course Ryan, Robyn & Rose.  Your 20 years of work and friendship with All West was truly a family affair!  Best wishes for the next chapter of your lives! 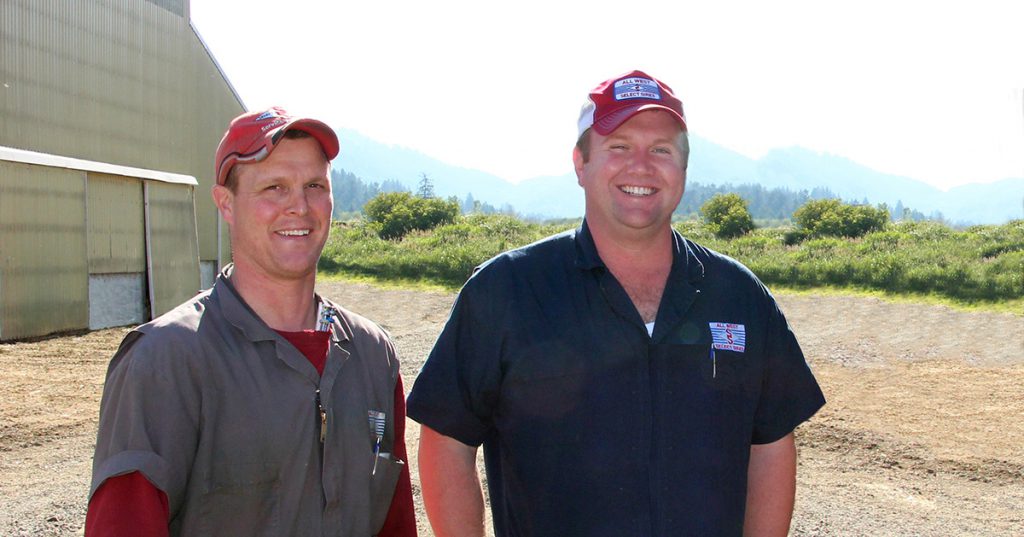 There’s a new sheriff in town!

Fortunately, we have a fabulous replacement for Dave’s technician work, and someone very familiar to Tillamook County!  J.R. Fisher has been with All West for five years now, and will be taking on technician duties in Tillamook County, along with handling direct sales of semen and supplies.  Our “Texas transplant” has had an exciting career so far, capably handling every duty he’s been assigned while at All West.  We know this transition in roles and responsibilities will be a smooth one, ensuring that no All West customer will miss a beat!