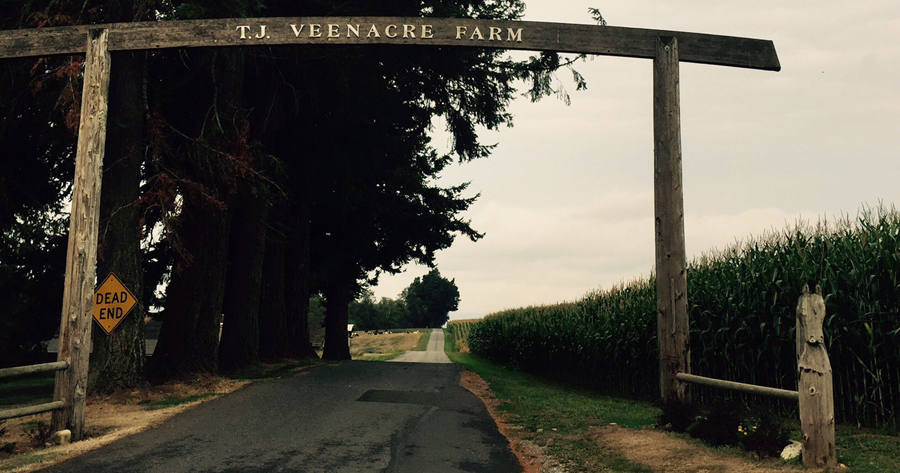 One of the biggest strengths of All West is our member/owners.  From them we gather ideas, and we get inspired, and we learn how they run their businesses.  We meet their family members and we see the legacies they’re each leaving in this All West territory of ours.  And that’s just awesome.

So if you spend any amount of time with Rolf Veening of Lynden, WA, you’ll likely get inspired as well.  This All West Board Member from District 1 is a managing partner of TJ Veenacre Farms, home to 400 milking Holstein and crossbred cows, as well as numerous acres of berries.  His partner, John VanderVeen, is the son of the original founder of the dairy, Ted VanderVeen.  When John isn’t busy on the farm, he also works as a nutritionist.

The day we spent with Rolf was typical in some ways.  It’s a large dairy, so as you walk and talk, there are constant decisions to be made, people to stop and chat with, phone calls to take and kids to direct!  But what was a-typical about our time with Rolf is that you understood he has a big vision mentality…in the business world, for his cows and for his kids. 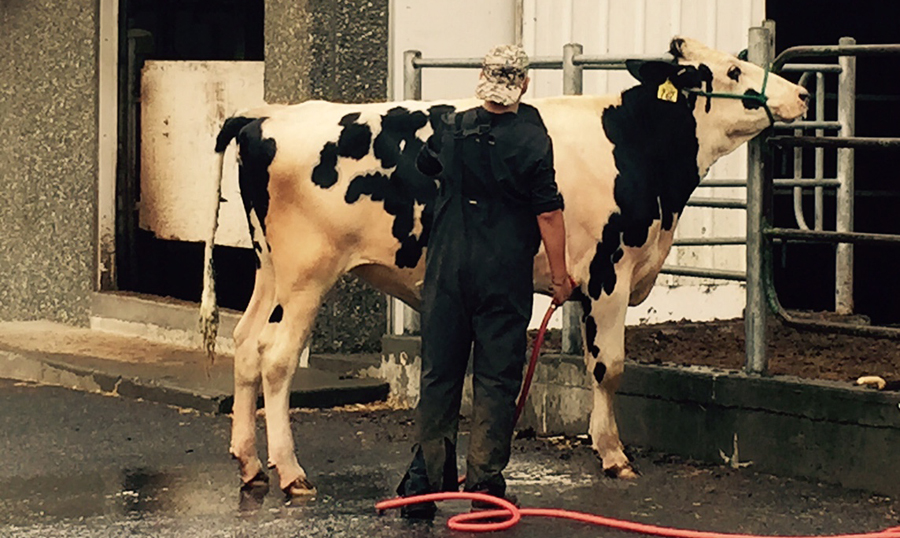 Rolf left his family farm in Holland to come to the U.S. and gain valuable experience in the dairy industry.  His family is still very involved in the ag industry in Europe, as his sister milks a herd of goats in France, and two brothers milk cows on their own (one with 120 cows and the other with 45 cows).  Another brother also came to the U.S. to gain experience and work here.  With a ‘global family’ Rolf has been programmed to keep a close account of news from Europe on a daily basis, because afterall “what happens there affects all of us,” he explained.  In April, the European Union eliminated the milk quota system that had supported Rolf’s siblings.  This should keep milk prices more stable, Rolf commented, and ultimately lead to the slow and steady growth of Dutch milk production.  But that’s only part of the story.  Dutch farmers might have caught a break on milk pricing, but still have a phosphorus quota, meaning farms can only expand when they have land available to handle manure output.  Because Holland is one of the most densely populated spots on the globe, this presents a problem.

Yes, Rolf is aware of the news because of how it might affect his family members, but also stressed that we can’t “live in a bubble” and need to know and understand what’s going on in the global agricultural industry.

From talking about the news, to talking about cows, Rolf’s mind quickly transitions to the milking herd.  “We pay attention to details,” he said.  “What we do for these cows today will impact their performance tomorrow.  One of the biggest things I focus on is transition cow success.  If you can keep stress levels down when cows are transitioning during any stage of lactation, it’s a good thing.  We have found that the biggest factors that affect this are nutrition and housing.”  Because partner John is a nutritionist, the farm can capitalize on his expertise and the herd is in excellent shape.  As far as housing goes, the cows aren’t overcrowded and were extremely comfortable and quiet while we were there.

Beyond those key points, Rolf concentrates on the power of genetics, with the help of his All West/Select Sires team.  With the guiding expertise of salesman Ken Haak and SMS Evaluator Maynard Axelson, Rolf feels like he’s got a winning combination to work with.  “We like to breed cows that have enough capacity and strength so they’ll last.  I like to see good, functional cows and I rely on people like Maynard and Ken to help me get what I want.” 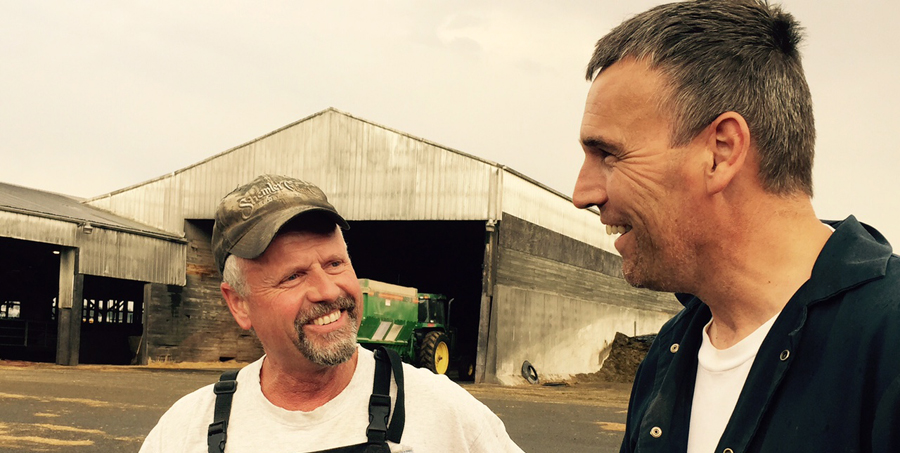 The TJ Veenacre Farm is just one of 35-40 herds that Maynard does SMS evaluation work at, but while the herds may vary, Maynard’s advice to them remains consistent.  “I still recommend that people use some of those ‘older’ bulls because they’re often overlooked.  My customers, like Rolf and John, want to wait and see what bulls actually do, and in turn, they get a tremendous value for their semen dollars spent!  It’s kind of nice to know what you’re going to get!”

Maynard really likes the way the 7H10818 Calibrate daughters are doing in the TJ Veenacre herd, as well as the 7H10233 Mizzou daughters.  “The Calibrates are really wet cattle and the Mizzous have tremendous frames and body.  We’ve also used quite a bit of Shamrock and Planet here, which are two bulls I really like.  Not only do you know what you’re going to get when using them, but they last.  Rolf’s vision is to have a strong, long-lasting, profitable herd using the most reliable genetics possible.  And that’s what we’re delivering.”

How has the ‘genomic era’ changed Rolf’s outlook on genetics?  “I really like genomics.  We’ve traditionally used a lot of proven bulls because we absolutely know what we’re going to get.  With new genomic young sires, and the reliability on them, we suddenly have more doors open.  I never thought much of the registered side of the business before.  We were a commercial herd and couldn’t really keep up with everything going on with those breeders.  But now, with genomics, registered and commercial guys are on the same playing field.  It lets everyone ‘play the game’ which is a good thing because I think it’s introduced new genetics to the table as well!” 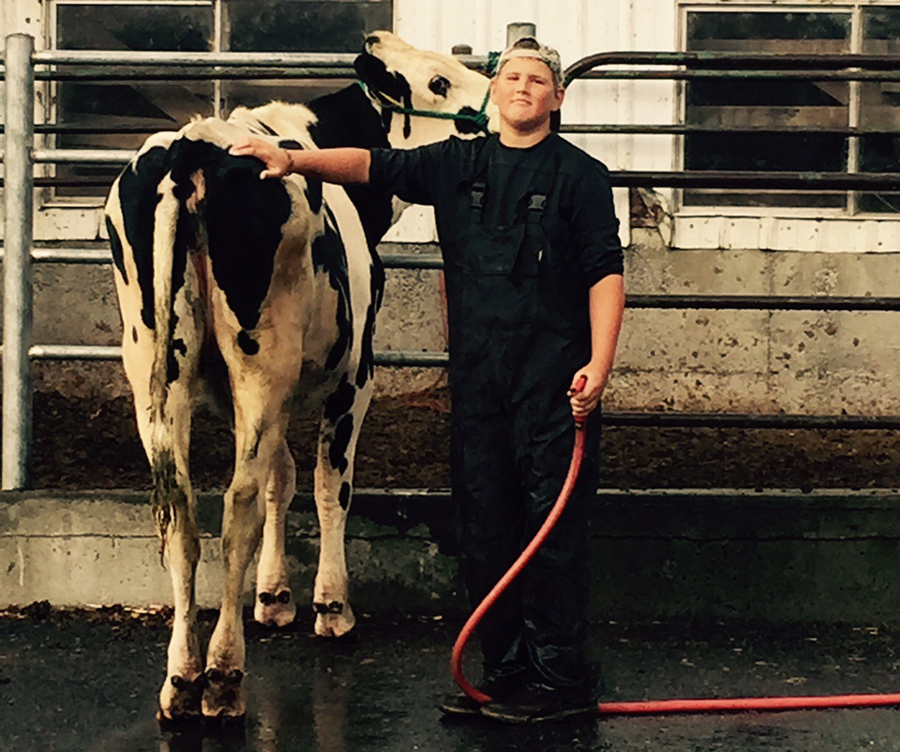 From the check on world news, to a walk through the cows, our tour ultimately ended up at the outdoor washrack where one of Rolf’s sons was scrubbing a heifer for the Lynden Fair.  Rolf and his wife, Katie, have three children.  They’ve worked very hard to instill that sense of “big picture vision” in each one of them, and it would seem they’re continuing this family tradition.  Their 16-year-old son spent six weeks fishing in Alaska before going on a Missions Trip to Mexico.  Their daughter also went on a Missions Trip, but headed to Ghana.  “We want our kids to have a big view of the world.  They can’t live in a bubble here in Lynden.  So they need to know and understand and experience what’s happening around them.”

From the outside you may just see a great herd of cows and some happy family members and workers at TJ Veenacre Farms.  But oh what a world of vision and inspiration lies beyond that!

These are the “Faces that Make All West!”