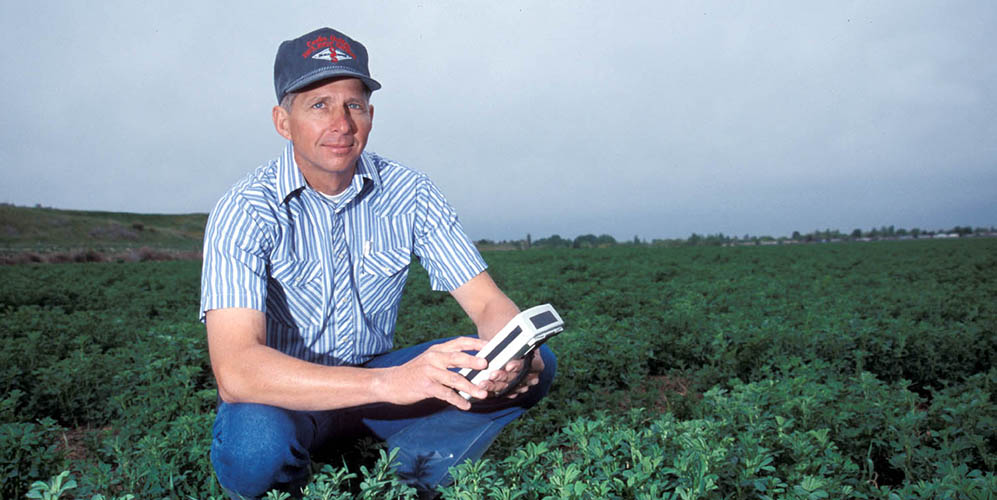 How many people can say that over the course of their career, they were a relief technician, a dairy producer, a Holstein classifier, an SMS evaluator, the breeder of a successful bull in the Select Sires Beef lineup, and even a college professor? Fred Jorgensen has truly done it all!

Although Fred didn’t grow up on a dairy, his interest in cattle led him to be active in 4-H at an early age in his hometown outside of Santa Rosa, CA. He continued to compete on the dairy judging team in FFA while working on several dairies throughout high school.

Having enjoyed his experiences doing both, he continued competing on his junior college and four-year university teams and worked on the project dairy while attending Cal Poly, San Luis Obispo. This is where he first met Tom Olson, the General Manager of Superior Sires. At the time, Superior Sires was All West’s distributor for the state of California and later merged in to the All West cooperative. “Tom is the first one who ever gave me one of those big, red, iconic hats!” Fred vividly recalls.

Fred’s passion for cattle grew even stronger through his college education experience and led him to start a dairy of his own, alongside his brother in Orland, California. When their dairy partnership ended, Fred offered to help local Superior Sires technician Bob Sexson breed on his route. Before hiring Fred to help, Bob had worked two consecutive years without taking a single day off!

During this time, Fred made his first trip to Burlington, WA to “officially” learn how to breed cows from the professionals of our cooperative. This is where he met All West legends Archie Nelson, Herald Catlin, Gary Bates, and Pat Brown. Fred continued to breed cows alongside Bob for nearly five years before becoming a Holstein Association classifier where he scored cows for the next three years.

With a young family of his own, Fred decided to take a job at the Chico State University Farm that once again allowed him to be closer to home. Over the next seven years, Fred also worked part-time teaching lower division agriculture courses at Butte Community College. Fred jokes, “It’s ironic because I wasn’t a very good student myself. I even got a letter addressed to “Professor Jorgensen” from a student and that gave me a good laugh.”

Eager to get behind cows and work with producers once again, Fred reached out to All West General Manager Herald Catlin to see if there were any positions available at All West. Although there were not at the time, Herald called Fred back several weeks later to tell him he had the perfect job for him!

Fred spent the next fifteen years working as an SMS evaluator for All West/Select Sires. When he began, his vast territory spread from the outskirts of Selma, CA all the way up to Orland, CA and over to the northern bay area, but as the team grew, he was relieved of some areas. For the past eight years, Fred has proudly served All West/Select Sires customers from Hilmar to Humboldt, traveling over 3,000 miles each month to satisfy the herds of our member/owners.

Between his travels, Fred and his wife Toni managed to raise a very successful herd of their own beef cattle at home in Orland, CA. Their most notable achievement has been 7CH95 FTJ CASCADE 1508, a high performing, attractive bull purchased from them by Select Sires Beef. CASCADE has been a Select Sires Beef customer satisfaction bull ever since, delivering calves with low birth weights and super high vigor. “It was extremely exciting for us,” Fred humbly commented. “I’ve spent my whole life in the industry and to have a bull in the Select Sires lineup is very rewarding!” He anticipates that CASCADE will not be the last bull from their herd to be marketed in the AI industry. 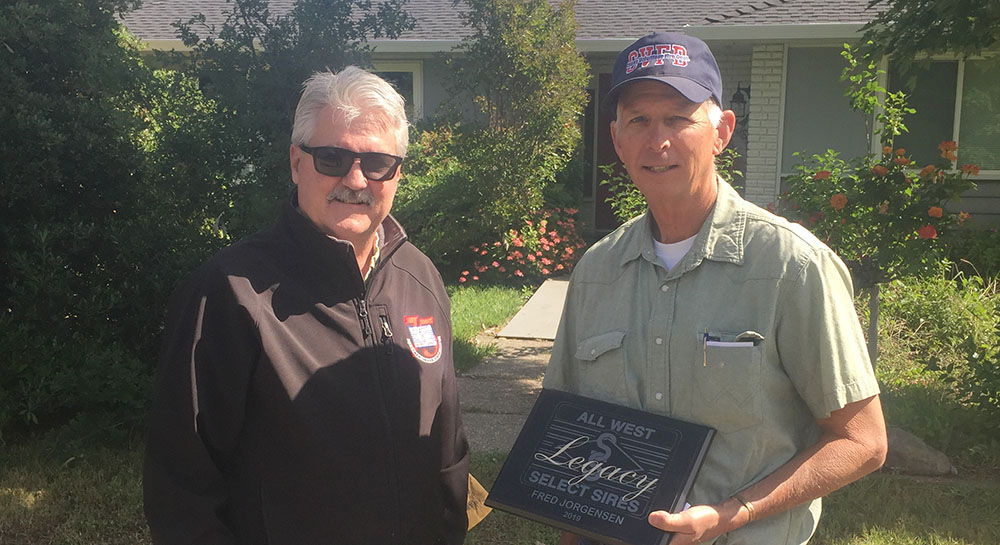 Fred officially retired from All West/Select Sires on April 30, 2019. As he reached this great milestone, he looked back on his career and the many changes he witnessed in the industry, from the introduction of sexed semen, to genomics, and now the beef-on-dairy movement. Fred also noted how much the industry as a whole has changed, from milk, feed, and livestock prices to the management of cattle. “Producers take better care of their cattle today than ever before because they have the technology and resources to do so. Cattle look better and production levels have rose. The AI industry can take some credit for that, but management by the dedicated dairy producers is much better, too!” Fred noted.

The one thing that hasn’t changed is the quality of the All West Family. “The people of All West have always been great to work with. This company has historically been a good place to work. The turnover is very minimal and our customers are really good people!” Beyond All West Territory, Fred considers the entire federation’s Select Mating Service crew to be “a very special group of people”.

Having worked under three different All West/Select Sires General Managers over his career, Fred gives special thanks to Herald Catlin, Bill Genasci, and Jim Wells. “Herald and Bill couldn’t have been easier to work for! They gave me what I needed and said go to work.” Fred recalls a time when he broke a data collector on the job and fearfully called Herald to admit his mistake, to which Herald replied, “Oh Fred, the way you sounded I thought it was something serious. I was expecting you to tell me you broke both of your legs! Don’t worry about the collector.”

“As the industry has changed and our team has grown significantly, Jim Wells has had to tackle some new challenges that never existed before. The job of General Manager has changed with our industry and he has certainly done a great job!” said Fred.

Although he will miss the members of his team, Fred will also miss the satisfaction he got from witnessing the genetic progress of the herds he served. “Usually when I first start a herd on a mating program, they are using what I call the “Bull of the Month Club”, randomly selected from a tank. As we proceed with the planned mating program, they usually start using higher quality bulls. My favorite part is when the first group of heifers from that mating come in to production, and they see the difference like night and day! To stand in a herd of cattle alongside a producer and say “Yes, that mating worked!” truly excites me.”

Not only does Fred find it rewarding to watch a herd progress, but to watch the people develop, as well. What he will miss most is witnessing the young children of the producers he started working with grow up and take over the operations themselves as the next generation.

“I have a friendly relationship with my customers! With some, you become family. Some of them I’ll miss and some might even miss me! You can’t do business with someone for 20 years and not like them.” 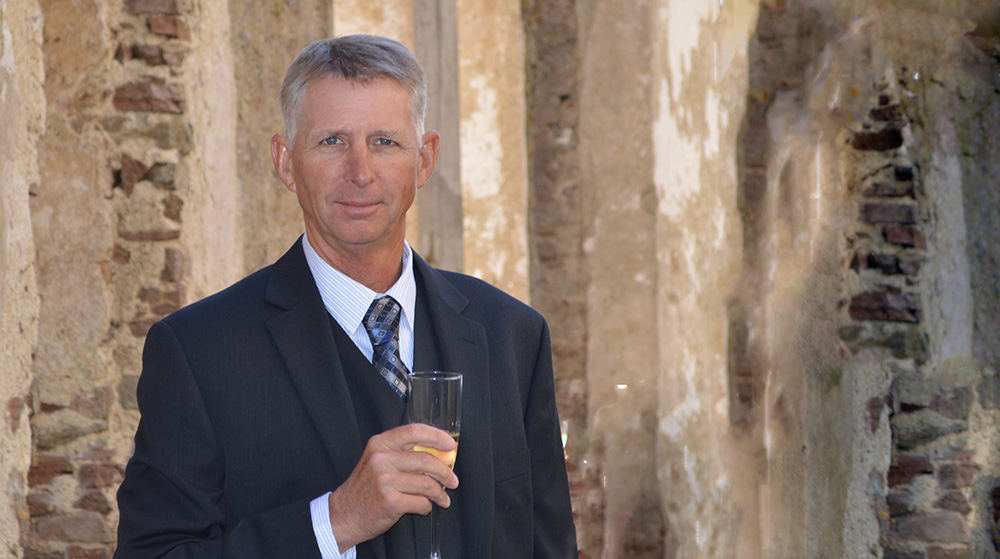 As for the next generation of All West service providers, Fred is leaving them with a bit of advice before he ventures in to retirement. “You have to know cows, be able to get along with people and tolerate many hours of travel. Some people can do one of these, some people can do two of them. The hard part is finding people who can excel at all three. It’s also helpful to know how to turn on a computer!” Fred has never been a big fan of the technology that has quickly come along in the industry. “Don’t worry about the little stuff. Worry more about where you’re going and less about where you’ve been. Take responsibility if there’s a problem, whether it’s your fault or not, for the sake of our customers.”

Although Fred admits that the idea of retirement is still odd to him, his biggest fear is no longer having an excuse to pause all of he (and his wife’s) unfinished projects, but notes that he certainly won’t be bored any time soon! Fred also plans to spend a great deal of time maintaining the quality of his beef herd, traveling with his wife, hunting and fishing, and most importantly, spending time with his children and young grandchildren.

Fred’s humble attitude, caring personality, and vast knowledge made him a great asset to our team. His sincere passion for cattle and those who raise them will be greatly missed by the All West Family. We thank Fred for over 20 years of exceptional service and wish he and his family happiness and health as he begins his retirement. Thank you, Fred Jorgensen!