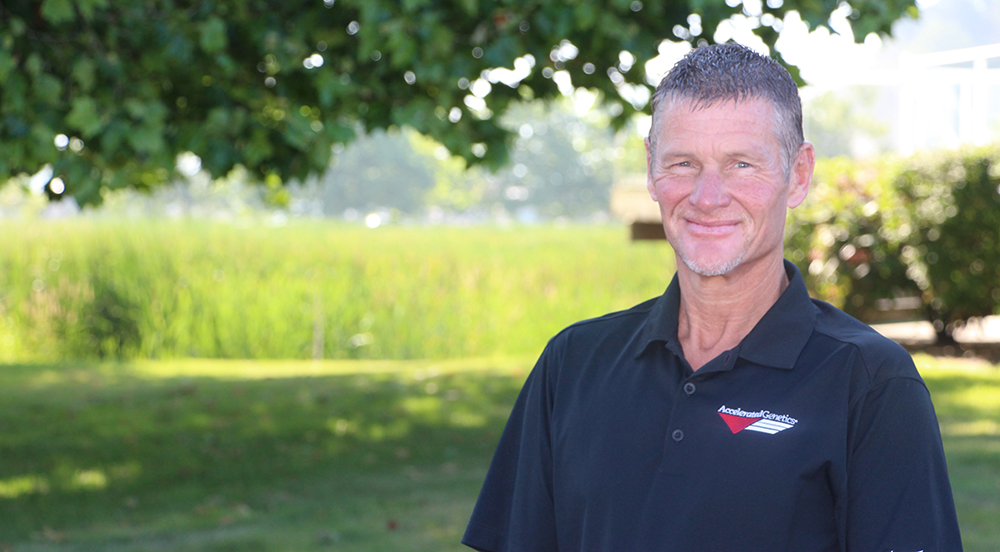 Originally from the state of New York, Allan set out to the west coast in search of further education that he found by attending California Polytechnic State University, San Luis Obispo. He quickly became great friends with several other out-of-state students who were attending the university far from home. One of those new friends was Scott Ruby.

Scott graduated before Allan and immediately went to work for World Wide Sires. In the spring of 1994, Scott called Allan with an opportunity that he could not refuse, as he desperately wanted to stay on the west coast. Scott arranged an interview for Allan with Accelerated Genetics and in his words, “The rest is history!” By June 28, 1994, Allan was the newest employee of Accelerated Genetics.

Allan’s determination to stay on the west coast and make a successful career for himself was evident from the start. Accelerated Genetics had three different sales representatives come and go from the Oregon area in the year prior to Allan’s hiring. “Everyone thought I would be another short-term employee and I wouldn’t last, but I was bound and determined to make this work,” said Allan.

The Ruby Family at Fir-Ridge Holsteins quickly became one of Allan’s first customers, as well as other friends and acquaintances he had met while attending Cal Poly. Networking with both his current customers and his community members in Oregon allowed him to quickly gain accounts and increase his sales. He also learned from several mentors at Accelerated Genetics who had sold over one million units of semen in their lifetime. This goal intrigued Allan instantly and encouraged him to start making a plan to reach it.

His serious commitment paid off as Allan sold his one millionth unit of semen this month, to none other than Fir-Ridge Dairy. “It takes perseverance and it takes commitment,” said Allan. “Most importantly, you have to really enjoy what you’re doing and I always have.”

“Allan has a true passion for cows and the dairy industry, said Scott Ruby, Senior Vice President International Sales and Product Management at World Wide Sires. “In the 28 years that he has been in Oregon, he has become an exemplary leader in our state, serving and taking leadership roles on numerous boards. All the while he has continued to provide incredible service and excellent advice to the dairymen in our state. Allan has been a great friend to me since we started at Cal Poly together over three decades ago, and I couldn’t be more proud of him in reaching the awesome milestone of one million units!” 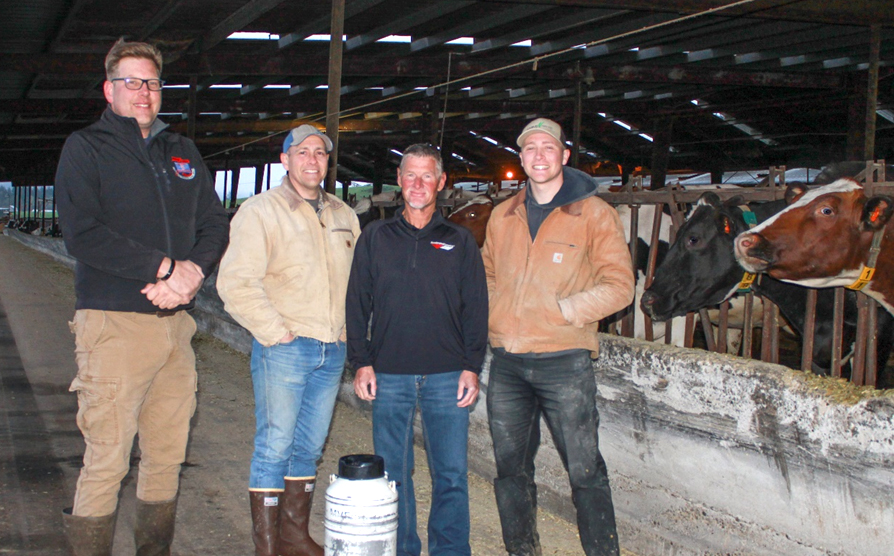 So, what’s Allan’s secret to success? You may think knowing all there is to know about cows, but Allan credits his ability to understand people more than anything! He grew up on a dairy where his family raised an excellent herd of registered Brown Swiss cattle and his father owned and operated an equipment business. This allowed Allan the opportunity to learn how to communicate with and respect people at a young age.

“This is a people business, including both your customers and the team you work with, more than anything,” said Allan. “I was lucky enough to be mentored by some really great people who I gained a lot of knowledge from.”

As Allan’s career progressed, other companies in the A.I. industry noticed and began to offer him interviews to work for their own companies. Allan honestly stated that he was happy where he was and was not interested in going elsewhere. During this time, he realized the importance of staying true to himself and respecting his competitors. “I never let myself talk down about anyone or any organization,” said Allan. “In this industry, you truly never know who you will be working closely with in the future.” Fast forward to 2016 and Allan’s mantra allowed him to be hired by fellow competitor All West/Select Sires when Accelerated Genetics merged with Select Sires Inc. 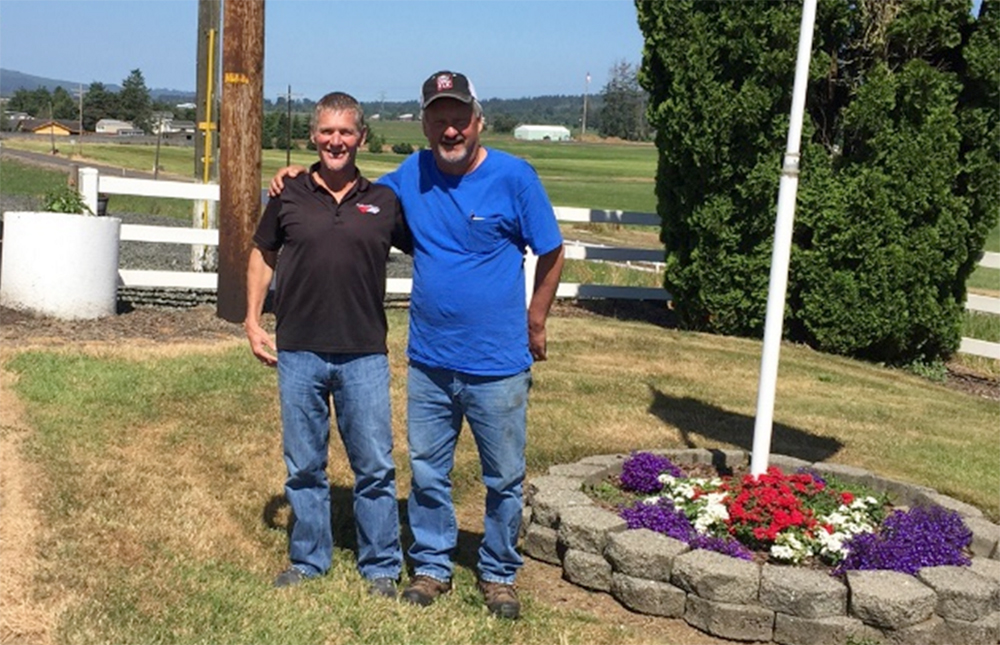 Allan with breeder of 14HO7328 MOOKIE, Greg Myers of Coastal-View Dairy in Tillamook, OR

Now twenty-eight years in to his career, Allan is overwhelmed when he looks back at all of the people who he made strong relationships with and learned from over the years.

The late Todd Wenzel was Accelerated Genetics’ very first route representative in the state of New York. Allan was only in high school when he met Todd, who was the representative who serviced his family farm. Several years later when Allan became Todd’s colleague as an Accelerated Genetics representative himself, he was able to learn valuable lessons from him.  “Todd was the most respected person I ever saw on a dairy and he sold a tremendous amount of semen and product, said Allan. “I rode along with him several times and learned so much from him. He treated his 50-cow dairymen the same as he treated his 5,000-cow dairymen. He had a way about him that made everyone feel equal and good about themselves.”

John Merrill of Texas was another Accelerated Genetics employee who Allan really respected. “He was just like Todd. He could get along with anybody! He told it exactly like it was, upfront and honestly. He did a tremendous amount of business and taught me a lot.”

The late Allan Pereira was also a great friend to Allan. As an Accelerated Genetics representative of Southern California, the two did not get to see each other often, but they would talk on the phone every single day. Allan recalls his phone calls being hilarious and leaving him laughing every time. The distance did not stop their friendship. For nearly 15 consecutive years, Allan, Allan and fellow All West Representative Benny Cotta, would take several days off to travel to Wisconsin to visit the Accelerated Genetics office, tour dairies to see sire daughters, and explore the state!

Former President and CEO of Accelerated Genetics in Wisconsin, Roger Ripley, and Allan are still great friends to this day. “I am forever indebted to him,” said Allan. “There were times early in my career when I wondered if people really believed in me and he always took the time to make sure I knew he did. Even as the CEO of the company, called me every month to check in to see how I was doing, as well as all of the company representatives. I always had great respect for him because of that.” 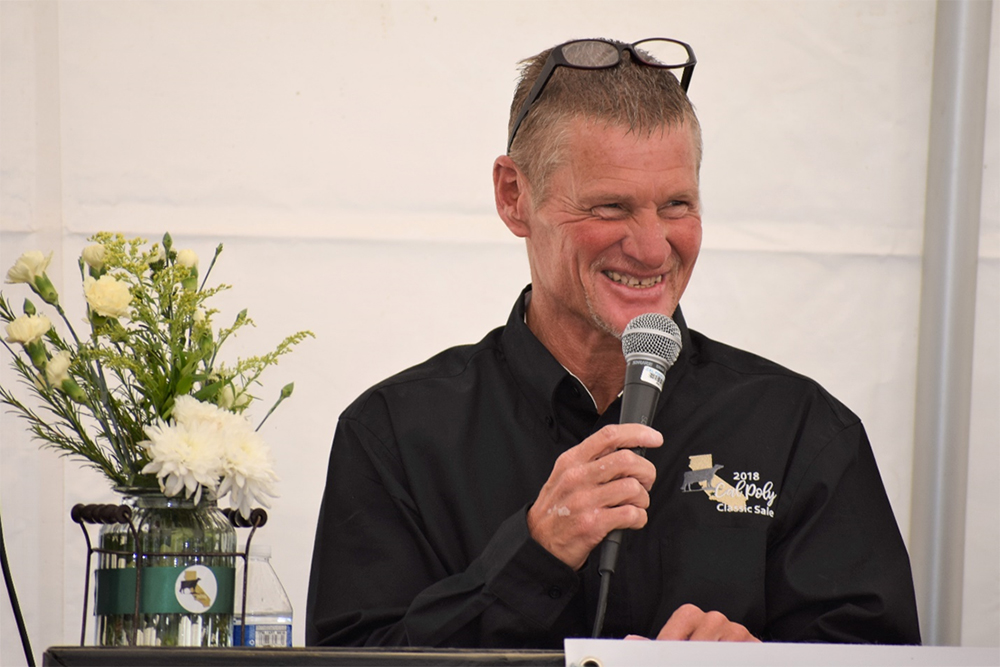 Allan admits that not every day in this business is easy, but it is the people in the industry who have made his job worthwhile. He has become a wealth of knowledge himself having learned from the best and now gives back to our team by sharing his experiences with our less experienced representatives who are beginning their exciting careers.

All West/Select Sires thanks Allan for his hard work and dedication to sell one million units of semen. In March 2022, he became the only Oregon-based A.I. sales representative to ever accomplish this goal.

Congratulations and welcome to All West’s “Million Unit Club”, Allan! 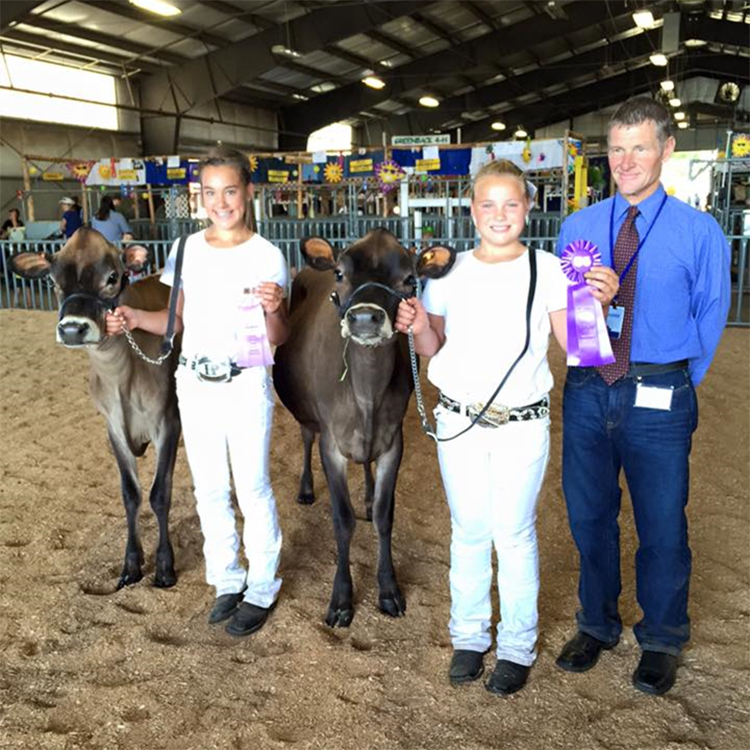 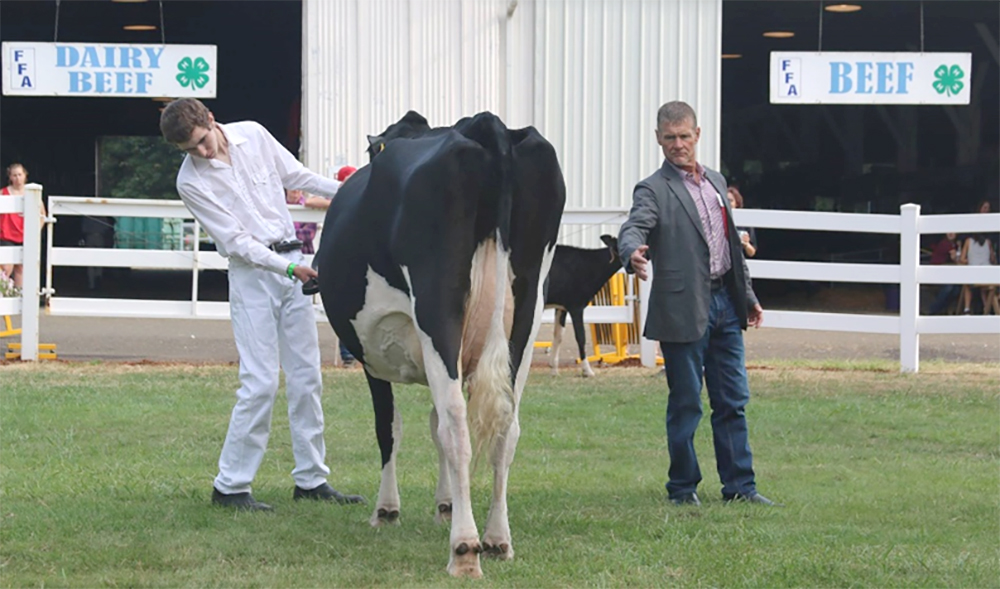 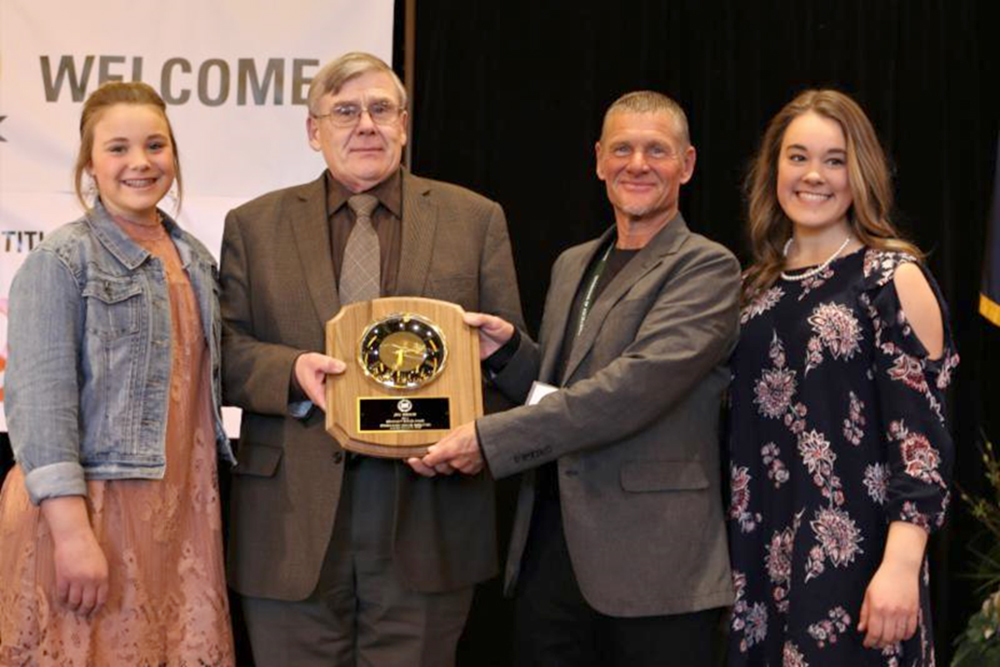 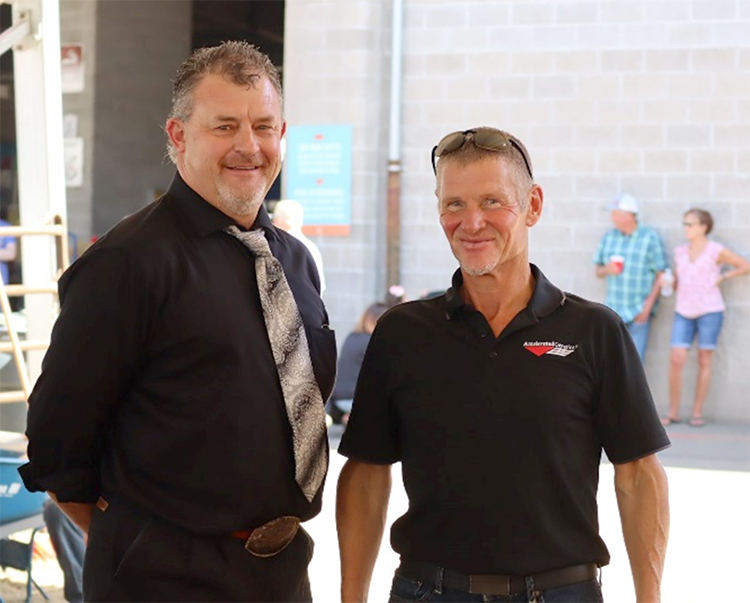 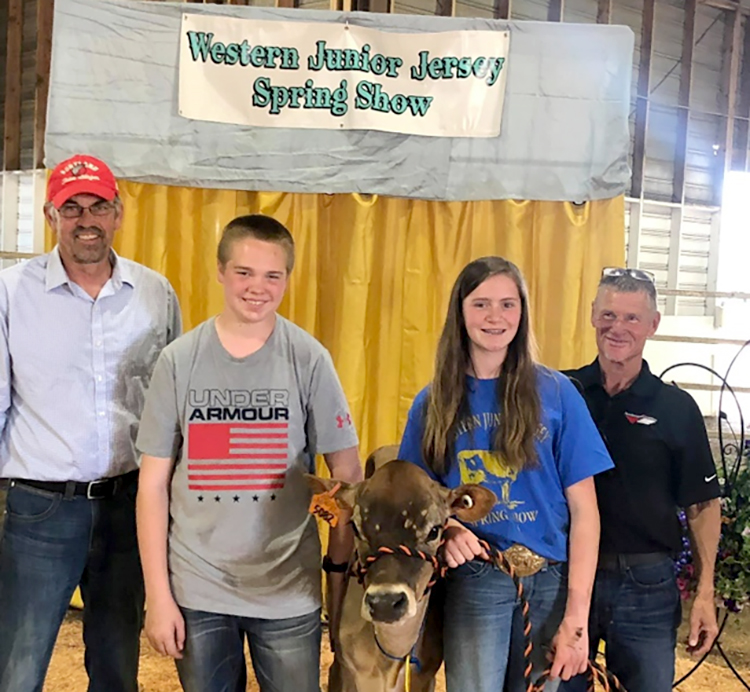 Allan has served as judge and ring assistance at many Oregon shows and fairs and volunteers his time on a variety of committees and boards throughout the state.