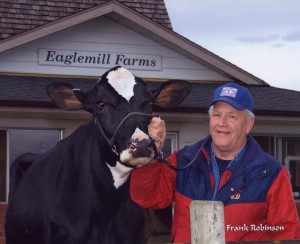 1. How long have you been working at All West/Select Sires?

Just over 47 years now. I was hired by Archie Nelson in October of 1968 as an A.I. Technician. During that time we were known just as All West Breeders, but it wasn’t too long before the big merge with Select.

2. What type of positions have you held at All West?

I started out as a technician, but it wasn’t long before Archie was trying to get me into sales. I was hesitant at the time because I still had my own herd of milking cows to tend to. Eventually I managed to find myself in sales one way or another. I was fortunate to also do some evaluation work along the way; which I still get to do every now and again.

3. Where were you raised?

I was born in North Dakota, but by the time I was three, my family moved to Lynden, Washington.  That’s where I spent my childhood.

4. Did you have an agricultural background?

I did. My father was a cattle dealer and I always had calves or other animals to care for. We ran a small scale dairy which I eventually took over and managed for 25 years. 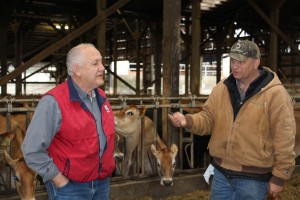 There was a farm in Lynden I had been working at as a sales representative for quite some time. Years ago when I pulled up to the farm, the owners’ young boy came running out at me in a hurry with a huge smile on his face. He came up and said, “Ken, do you want to see what my father got me for my 8th birthday?” I of course said sure and he ran off. In a moment the boy returned with a small black lab pup. Many years later I was making a call on this same farm when the son of the boy came running out after me with a similar black lab pup following close at his heels. He cried out “Mr. Ken, look at what my dad got me for my 8th birthday!” It was one of the greatest moments I can remember. Working for All West has never just been a job, it’s given me the opportunity to be a part of our members’ lives and experience generations of traditions.

6. Who was your favorite bull and why?

7HO5157 Durham was my original favorite. He was a strong bull that had a great impact on the industry and was very widely used because of his type. However I think 7H011314 Mogul would have to be my new favorite.  You can use him in nearly any herd and he won’t mess a thing up.

7. What is something that has impacted the dairy industry in a positive way?

There are two things that I experienced in my time that I would say really impacted the dairy industry as a whole. The first would be the automation of parlors. We started out by milking cows into a bucket and now there are herds with robotic milkers. The second would be the introduction of frozen semen.  This allowed us to bring more superior genetics into a wider range of farms around the west.