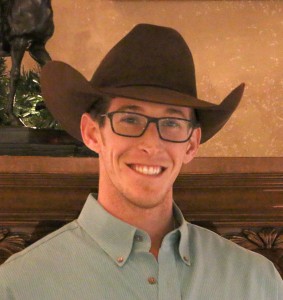 All/West Select Sires is pleased to announce the addition of Dan Curtin to the team as an A.I. Relief Technician. Dan was raised in Showlow, Arizona on a small family farm where he first discovered his passion for agriculture. Curtin always seemed to have a new 4-H or FFA project going on, but after a few years it became obvious that cattle were his favorite to work with.

Curtin spent six years as a professional bull rider; raising beef and bucking stock when taking a break from the rodeo circuit. Dan graduated from Showlow High School in 2009 and went on to become a certified welder and framer. In February of 2015 he attended the Graham School for Cattlemen in Kansas to learn Artificial Insemination. Outside of working with cattle, Dan is very talented in leather tooling and enjoys the challenge of each new project.

Dan will be relief breeding in both Skagit and Whatcom counties in western Washington. He hopes to eventually start his own route and grow in every direction possible with the company. “I want to be as involved as I can with All West; spending time with both the members of the cooperative and the cows is really something that I find joy in.”

Curtin started work with All West in early December.