Agriculture stays ahead of the curve in caring for land and livestock, but that’s too much of a secret, according to a Nebraska Cattlemen environmental specialist. 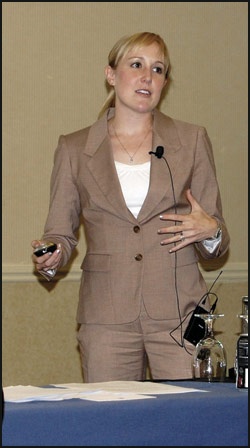 One of Kristen Koch’s first slides at the Feeding Quality Forum in Omaha this August set the tone for her talk with, “Eat our dust, EPA.” She talked about public misconceptions and strategies to rebuild the beef industry image. At the Garden City, Kansas, event a couple of days later, Clayton Huseman of the Kansas Livestock Association (KLA) delivered related comments on regulations.

“I want to arm you with an arsenal of scientific facts so you can feel comfortable and confident talking about the great job the beef industry does managing its environmental impact,” Koch began.

Shooting down bogeys in order, a myth about greenhouse gas (GHG) emissions from livestock was first. Noted at 18 percent of the total by a still-quoted 2006 United Nations report, the U.S. Environmental Protection Agency (EPA) in 2009 put it closer to three percent.

Efficiency helps the planet, she pointed out, as we generate more beef with less feed, energy, land, water, fossil fuels and even fewer cattle. Of course, that also decreases the GHG methane and ammonia produced per unit of beef.

“We can talk positively and confidently, with our heads held high,” Koch said. But even though the livestock industry’s impact is small and technology is further reducing that impact, “we’re one of the most heavily regulated industries.”

Huseman, director of KLA’s Feedlot Division, said in Garden City that all those regulations began by targeting issues outside of agriculture. He detailed how the regulatory aim shifted and expanded its impact on the beef industry, especially large confinement operations, and then reviewed current and pending laws.

Koch and Huseman agreed beef producers must become more efficient communicators. They see public misinformation as a big reason for the increase in governmental control, which Huseman said brings even more operational challenges and uncertainties.

As a call to action, he said producers must become more aware of what they are actually doing. “Too many times we obtain permits for production without truly knowing the contents, except for how long it lasts.”

He also stressed the need to look at regulations, in and outside of agriculture, in a new light: Consider not only the effects they could have today but in the future as well.
“We’ve got to review absolutely everything,” Huseman said. “Even if it’s not directed at our industry now, someday it will be.”

Gaining that awareness, producers need to pass the information along.

“I think every single environmentalist, animal activist, scientist, homemaker—anyone in the world—would agree the purpose of animal agriculture is to generate high-quality food at an affordable cost, low environmental impact and in an animal-welfare friendly way,” Koch said. “Find the common ground on the purpose of the industry. Then start speaking up about your practices.”