As a reminder, each of All West Territory’s 21 districts operate on a three-year rotation, so this year, the districts below were up for re-election of their district Director and Delegate. Nearly the entire process was done through the mail this year, saving the cooperative valuable expenses.

DISTRICT 06:
Randy Kortus was re-elected to the Director position and Austin Vander Haak was re-elected as the Delegate at the only district meeting held in person in Lynden, WA in November. These two will represent cooperative membership in eastern Whatcom County for another three-year term.

DISTRICT 07:
Chris Jansen received the Director position as a first-time participant in our cooperative’s leadership through a unanimous ballot with only one nomination received and accepted. Wade McMahan was re-elected in the Delegate position and will serve another three-year term.

DISTRICT 19:
Kathy Creighton-Smith received the Delegate position as a first-time participant in our cooperative’s leadership. Director Bill Hedstrom was re-elected through a unanimous ballot with only one nomination received and accepted and will serve another three-year term.

DISTRICT 25:
Jerald “JJ” Nunes received the Director position and Brad Vander Poel received the Delegate position through unanimous ballots with only one nomination received and accepted for each position. Both gentlemen have already served in these roles prior to this year’s re-election and will now begin another three-year term.

DISTRICT 26:
Bob Vander Poel was re-elected through a unanimous ballot with only one nomination received and accepted and will serve another three-year term. Bob will also represent the district without anyone in the delegate position due to lack of nomination.

Directors and Delegates are expected to:

– Purchase semen either directly or indirectly from All West on an annual basis for more than 50% of all females bred A.I.

– Believe in, and be supportive of, the programs and patronize our Cooperative on a regular basis

– Be willing to attend and participate in all meetings requested for the next three years. The All West/Select Sires Annual Meeting is held on the last Friday and Saturday of February each year.

– Work well with others, be qualified to make decisions in the overall interest of the Cooperative and support majority decisions

– Can’t expect or promote special favors for themselves, relatives or friends 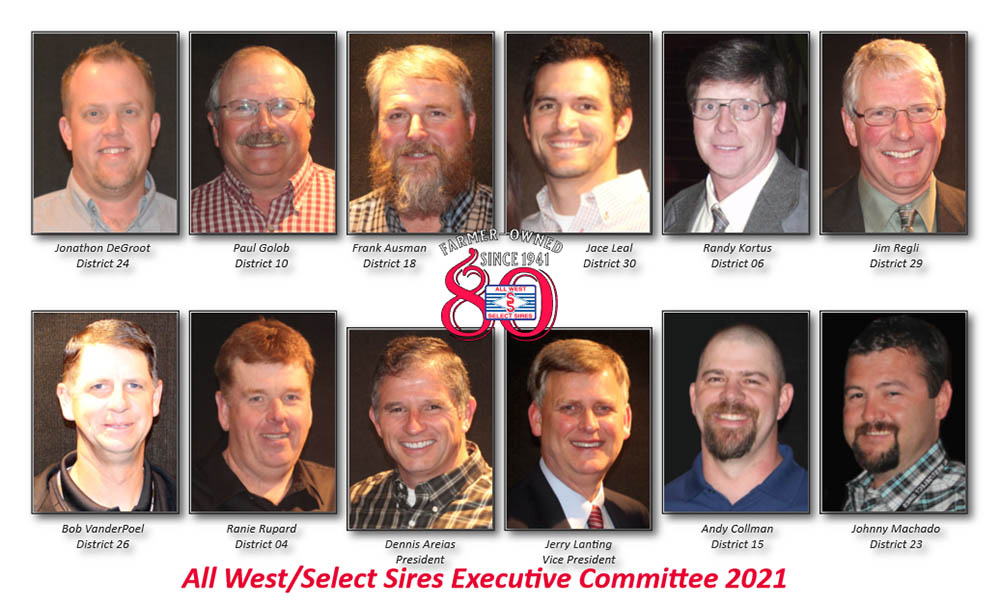 We feel confident that your representatives will uphold these requirements. We encourage you to talk with them about concerns, ideas and questions regarding your All West/Select Sires Cooperative.

Thank you to each of you who participated in this year’s election process. We’re expecting great things from our new Director & Delegate leadership group in the coming year. As always, thank you for your continued interest and support of All West/Select Sires.