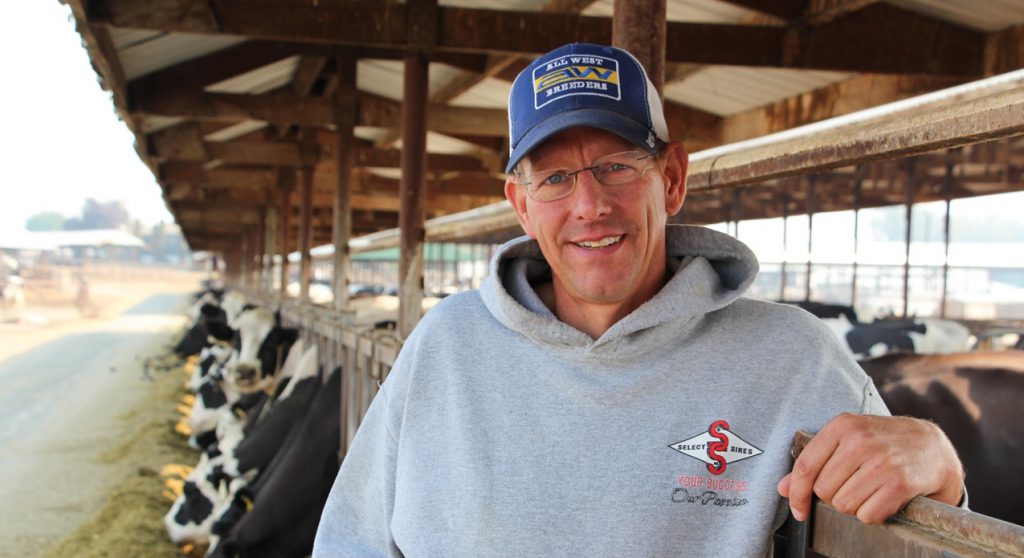 1.
What is your name and where are you from?
Randy Van Wieringen from Sunnyside, Washington

3.
How did you get involved in the A.I. industry?
“I became familiar with All West when I was just a kid. I’ve always been associated with All West. My grandfather, Archie Nelson, was the General Manager for 20 years. Some of my earliest memories as a kid were going to the bull barns of All West Breeders.

As I started growing up and getting out more, I’d go to some shows and sales with my grandpa and got to meet many different people who worked for All West. I’ve known Patrick Brown and Herald Catlin for as long as I can remember.

When I was 16, I started working on a dairy farm near where I grew up, feeding calves and milking cows. The week after I graduated from high school, I participated in the All West A.I. School in Burlington. When I went college, I had several jobs as herdsman of multiple dairies. They were all 100% All West customers. This is how I got to know All West legacies Maynard Axelson and Larry Nootenboom as they serviced the herds that I worked at.

When I moved up to Whatcom County, I got to know Ken Haak pretty well, as he was the evaluator at one of the dairies I worked on. In 2004, Ken called me and asked me if I’d be interested in a position with All West. Ray Reuble was retiring, Ken was moving in to his sales route, and I was fortunate enough to be able to take over Ken’s breeding route. I bred those cows in Whatcom County for about six years and then my wife got a job over here in Sunnyside, WA.

I called Bill Van de Graaf, who I had known for quite a few years, and asked him if there were any positions available in the area. Both Bill and General Manager/CEO Jim Wells agreed to let me move over to Sunnyside in 2010. I was a technician with my own route for about five years and then in 2015, the evaluator position became available and I was fortunate enough to move in to that role. Since then, I have been evaluating cows and helping customers with bull selection. Recently, I have started to do more sales and also using the Optimal Genetic Pathways (OGP) calculator for our customers.”

4.
Describe a typical day in your life on the job.
“What I enjoy about my job is there’s never really a typical day. Most days include early mornings going out to evaluate cows. My afternoons usually involve time spent on the computer, whether it’s bull selection for customers, running matings or completing Optimal Genetic Pathways (OGP) calculations. I also spend some time each week making sales, so each day is a bit different.”

5.
What do you enjoy doing when you are not at work?
“When I am not working, I enjoy spending time at home tending to the cattle of my own and hunting in the fall. Much of my wife and I’s time is spent attending our children’s extracurricular and sport activities.

6.
If it was your choice, what unique name would you give our next best-selling bull?
“MARK as a tribute to Walkway Chief Mark”

7.
What is your favorite part of your job?
“The main reason I enjoy working in the A.I. industry is the people. I’ve got to know my customers pretty well over the years and have become friends with many. Most of the customers in this industry have the same values and interests as we do, along with the people that we work with at All West.

My favorite part about working for All West is the people. All West has always stressed that this is a family. After being here 18 years, I’ve gotten to know a lot of people who work within the company and have become friends with a lot of them. It’s a real comfortable feeling. When you have people that you know that well and you trust, it makes doing your job that much more fun. Sometimes it doesn’t even seem like a job. You don’t dread going to work every day. You enjoy the people you work with and doing what you do. It makes things a lot easier.”