fine-tune  (verb):  to adjust precisely so as to bring to the highest level of performance or effectiveness

If you read many of the current articles on robotic milking systems, a big theme emerges, labor savings!  And while a great many systems have definitely helped out with worker-related issues on many dairies, this isn’t a story like that.  The Bouma family has always relied on themselves to get the job done, and they continue to do so.  The reason they wanted to install robotic milkers was plain and simple… “We want to do a better job at managing our cows.”

The Lynden, WA, family has a very nice farmstead just down the road from the Safeway store.  The barns are immaculate, the yards are trimmed and it’s quiet.  With just over 100 cows in the milking string, you don’t hear a lot of commotion coming out of the barns because the cows are eating, resting or being milked.  Isn’t that how it’s supposed to be?

Louis and James Bouma installed robotic milkers in April 2014.  “We were thinking of going out of business, actually, until our sister decided that she wanted to see the farm continue and as a result, invested in two robots,” explained Louis.  “It’s been an interesting experience for us.  From a financial point of view, it’s been a wash.  We’re no farther behind or further ahead than we were four years ago because we’ve never had hired help.  BUT…what the robots have done is helped make our good cows even better!”

Record setting performance in Lynden!  The Boumas were awarded DeLaval’s “Highest Production for a Day” in the west, with 6500 pounds of milk going through one robot in a 24-hour period.

What Louis meant by that statement is that they now have the time and ability to fine-tune their management, which means they’re better at formulating rations and can target great cows to push them a little bit harder.  In fact, the herd has increased from a 72-pound herd average four years ago to a 90-pound herd average today.

“And the cows love it!” said James.  “It’s a whole different style of management.”

By looking at the computer records for the herd, one can see that the average number of milkings per day ranges from 1.9 to 4.3 (and the 4.3 is a 7HO10849 SHAMROCK daughter who is milking over 150 pounds per day!).  The overall herd average is 2.6 times per day in the robot.

“The computer program is easy and provides lots of information,” Louis explained.  “It allows you to do a lot of extra things that help the cows out.  For example, we give a shot of extra energy in the ration for the first 21 days after freshening.  We have the ability to program that into the robot and that newly-freshened cow will automatically be given that feed additive during the day.  We don’t have to worry about it.”

How do genetics tie-in with a robotic system?  The Bouma’s father started with Select Sires back in 1954 when the family moved to Lynden from nearby Silver Lake.  “We’ve never used a bull on this farm, and we’ve always used Select Sires exclusively.  WAYNE was the first bull we used ‘on purpose,’” the brothers recalled.  “We’ve always relied on our All West technician and salesman to deliver the genetics we need to improve our herd, and they’ve served us well!  Once we started paying attention to the bulls we were using, we really noticed (and enjoyed) the improvements we saw!  If you think about it, both the technician and salesman know genetics better than we do, so why not rely on their expertise?  We’ve had excellent results.  The cows have always looked good, and more recently, we’re seeing that the robots really bring out the genetic potential of an animal.  That has made us pay more attention to bull selection over time and now we’re more concerned about things like feet & legs, teat placement, and a level udder floor…and it shows!”

One of the side benefits of concentrating on genetics for so long has been a viable live cattle market for the Boumas.  “The last five years, we’ve sold about 50 head of excess cattle.  We’ve never used sexed semen, but we had cows lasting so long that we ran out of room in the barn!  We mostly sold first-calf heifers, but that market has changed a bit since the price of milk is so much lower.”

Along with selling some excess cattle, the fact that the herd has extreme longevity has also allowed the Boumas to weed out cattle that don’t live up to their standards, and as a result, they have a consistent number of really, really, really good cattle in the herd.

All West Technician Brian Lenssen chooses the bulls that the Boumas will use, but acknowledges that “Louis has a wealth of cow knowledge, and it’s always interesting to see how much he knows about each cow.  However, they have trusted me with sire selection, so our current bulls to use are JEDI, MODESTY, MONTROSS, MORGAN and SUPERSIRE, along with a few ‘clean-up’ bulls.  I primarily choose robot-ready sires who are above 2500GTPI.  It’s exciting for me to see what these daughters look like when they are milking and also to see how much production Louis and James can get out of them!  As for cow temperament (which most people say increases with the use of robots), I haven’t noticed any difference because their cows were pets before!”

That’s what the installation of two DeLaval robotic milkers has allowed Louis and James to do.  “We’re not breeding our heifers as early as we used to, but instead let them mature a little longer.  We’ve found that they adapt to the robots easier when they’re a bit older, so we start breeding at 16 months of age.  We also feel like our calf raising program (which my sister manages) is pretty amazing, and if you don’t have a good calf & heifer program, you really can’t expect your cows to reach their full genetic potential.  Beyond that, we are fine-tuning the environment with our bedding management, specialized rations, and better bunk utilization.  Everything is coming together.  When the environment is good for a cow, she’ll produce as much milk as she can!”

One of the primary criteria for dairy producers to think about before choosing a robotic milking system is temperament.  In fact, Progressive Dairyman said in an article in their September 12, 2018 edition, that there are five main traits to consider for tomorrow’s robot cow, “Health, Milking Speed, Feet & Legs, Mammary System and Temperament.”  With great All West genetics, and the already calm group of cows in the Bouma herd, robots were a natural fit! 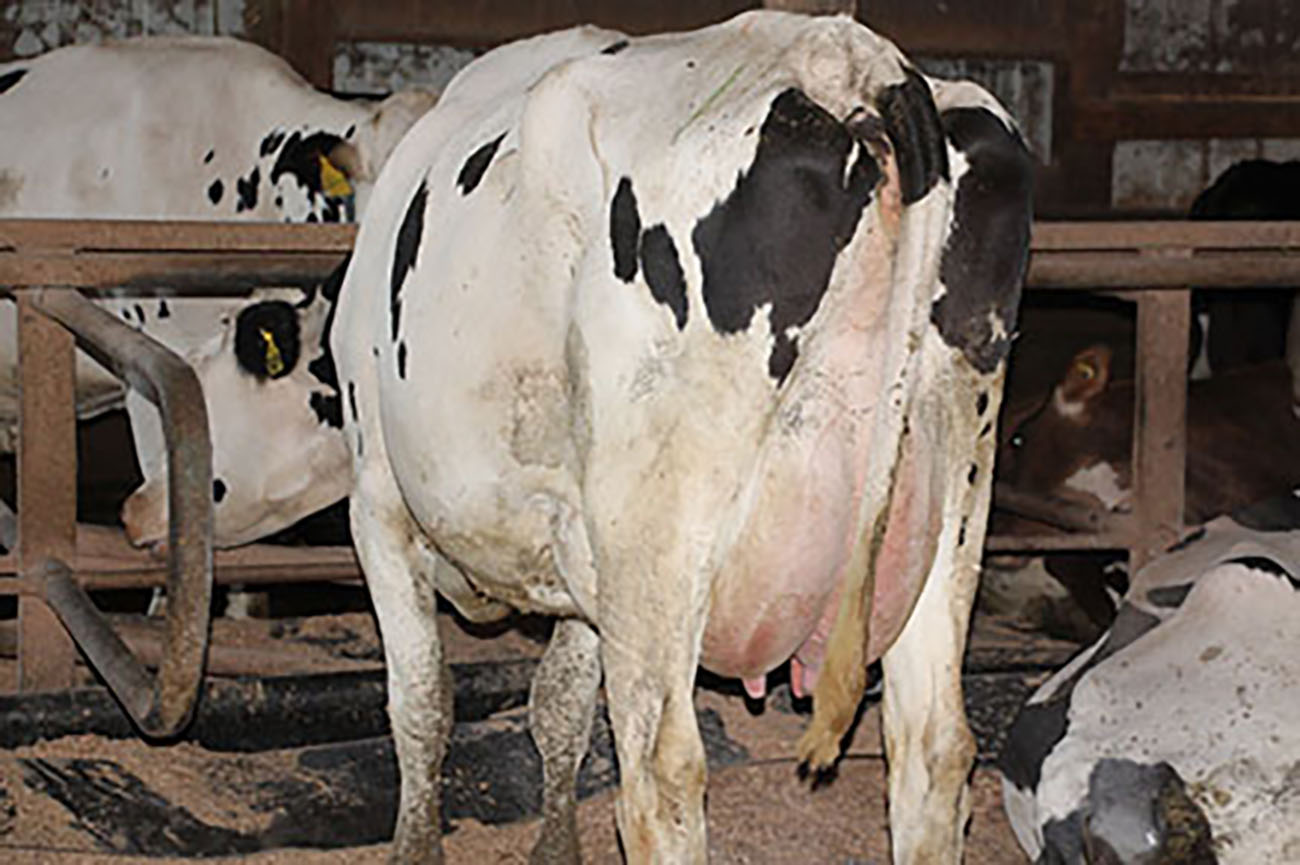 A young 7HO10721 BOOKEM daughter relaxes in the stall during the day.  Walking through the Bouma herd, you’ll notice an above-average cow size, with wide muzzles, strong front ends, and well attached udders.  Coincidence?  Hardly.  “The bigger cows give more milk,” said Louis Bouma.  “We like our bigger cows because they survive better.”  The Boumas have been All West customers since 1954.