All West Sales Representative and Dairy Program Specialist Jake Van Vliet recently surpassed the milestone of 500,000 units of semen sold in his career. As of November 31, 2022, he had sold 500,486 units. 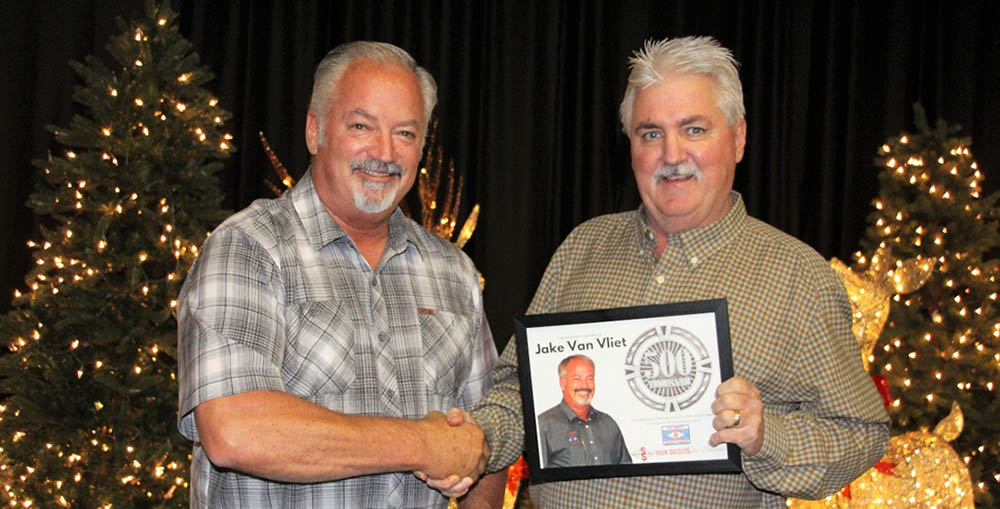 This milestone sales achievement has been well-earned in Jake’s career with All West/Select Sires and his lifetime of dairy experience, which began with his father’s registered dairy herd.

“All West/Select Sires was the most popular and dominate A.I. company on the West Coast when I was growing up. During that time, I did a lot of merchandising, buying and selling cattle for my dad’s registered herd. I also made all of the advertisements for Holstein World and California Holstein News to market the herd and through that experience I was able to get to know many registered breeders in the industry,” said Jake.

Jake eventually went on to start his own dairy with his wife Sandy where they farmed in Escalon, California for 20 years before selling their herd in 2003.

Jake shared, “After selling our cows, I knew I still wanted to work in the dairy industry and was very interested in genetics. King Smith who is now a valuable team member of Select Sires Inc. was my dairy’s technician before we sold our cows. I contacted him to see if he knew of any available jobs in the industry and shortly after became a Sales Manager for ABS. I worked in that role for seven years where I managed a team of 18 technicians and a few relief breeders in Northern California.”

When Jake was ready to move on from that position, he contacted Director of California Operations Bill Genasci at All West/Select Sires and as he says “the rest is history”. Jake and Bill quickly built a great working relationship and friendship that Jake still admires to this day. “I really enjoyed working with Bill because he was so accessible. I could sit in his office and talk with him about anything. It didn’t even need to be about bulls or genetics.”

Jake has now been part of the All West Family for over 12 years and credits much of his success to the relationships and connections he built within the registered Holstein industry from a young age.

“Being able to prove that I knew good cattle and could help others use genetics to improve their herds was a big benefit. I spent years building the trust I have now with my dedicated customers,” said Jake.

Although Jake admits that the industry is vastly different than when he began his career, he believes the foundation of his selling success remains the same. “When I began selling semen, there was very little sexed semen available to customers. Now, many producers have even moved on from conventional semen to mostly sexed semen and beef semen. I believe thirty to forty percent of what I sell to dairies today is beef semen,” said Jake.

Regardless of what kind of product Jake sells next, he is now on his way to the next major milestone. “I think I can become part of All West’s ‘Million Unit Club’ with about another 40 years of my career,” Jake laughed. He doesn’t have his next big sales goal in mind, but said he will certainly continue to do his job as long as he can be of value to his customers.

“I am impressed with the way Jake is able to build trust with his clients and continues to improve his sales. He has always been willing to learn and grow with All West to meet our members changing needs,” said All West General Manager/CEO Rory White.

We greatly appreciate Jake’s strong work ethic, vast experience, and dedication and wish him the best of luck as he sells the next 500,000 units!