Legends of the Fall

Carly Olufs, a junior at Oklahoma State University, hails from Petaluma, CA, and was the 2018 All West Summer Intern!  Carly received the coveted Klussendorf Scholarship.

Fall is a season of champions – World Series Champions, cattle champions from both World Dairy Expo and the Royal Winter Fair, and of course high school football champions.  Fall is also the season that the National Dairy Shrine honors nearly 50 student scholarship winners and a host of adult industry leaders.  These champions stand apart as exceptional driving forces of our dairy industry.

As a member of the National Dairy Shrine Board, I can tell you that the number of scholarship and adult applications can be staggering.  We’re fortunate to be in an industry that’s loaded with talent, passion and success, so some years, the task of picking winners for every division can be daunting.

While Dairy Shrine Board Members are not on the judging committees, we do get a sneak peak of winners, and I can tell you I let out an “Awesome!” so loud that I had my neighbors jumping….and they’re pretty far away!  To have one west coaster among the winners is a great accomplishment, but to have two, from the same state, from the same county….well that’s just…awesome!  And to have three students winners on top of all that?  Legendary!

All West has been lucky to have close relationships with both adult winners.  Randy Kortus has not only been a valued All West customer, but a long-time member of our Board, past Board President (twice) and also President of the Select Sires Board.  Members of our team have worked side by side with him since he and Jana married, and we were with him through some tragic incidents in the past.  To say that this man, and his family, are resilient, is an understatement.  His dedication to developing long-lasting, high producing cows is unmatched and it seems SO deserving for him to be recognized as the NDS Distinguished Breeder of the Year.  More about Randy appears in this newsletter, but it goes without saying that the entire All West team congratulates him.  We’re a better cooperative because of his involvement and his leadership, and we’re excited that the industry could honor such a tremendous dairyman from the Pacific Northwest.

Jerry Strandlund received the NDS Pioneer Award, and you will find a full article on him in this newsletter as well.  Jerry was a former employee of All West, and developed the monumental marketing campaign of “One Jump Ahead.”  He was fairly involved in many aspects of day-to-day operations at All West, and there are quite a few stories of road trips, cow picturing and vehicle mishaps during his time in Burlington.  As Jerry moved on to develop his own business of cattle photography and later the evolution of the Northwest Holstein News, he maintained a very close relationship with many staff members, including collaboration on event coverage and advertising in the Annual.  It goes without saying that his wife, Sandy, has been known to “swoon” members of the staff with her famous crab cakes, and that’s something everyone should have the pleasure of trying!  We interviewed Jerry during our 75th Anniversary Celebration of All West/Select Sires, and he was gracious enough to relate some stories of days gone by, as well as enlighten us on the evolution of our great cooperative.  You can view his anniversary video

People often comment about the culture of All West and it’s tight-knit, family-feeling of doing business.  It’s often the envy of other companies, especially considering that our geography doesn’t lend itself to close physical connections.  But when you realize how lucky we are to have a foundation laid by two men such as Randy Kortus and Jerry Strandlund, it’s really no surprise at all!  We’re just glad the rest of the industry recognizes and appreciates that, because we sure appreciate them!

As if those two adult recipients weren’t enough to celebrate, we ALSO have three exceptional young ladies from All West territory who received student recognition at this year’s National Dairy Shrine Banquet.  Carly Olufs, a junior at Oklahoma State University, hails from Petaluma, CA, and was the 2018 All West Summer Intern!  Carly received the coveted Klussendorf Scholarship. 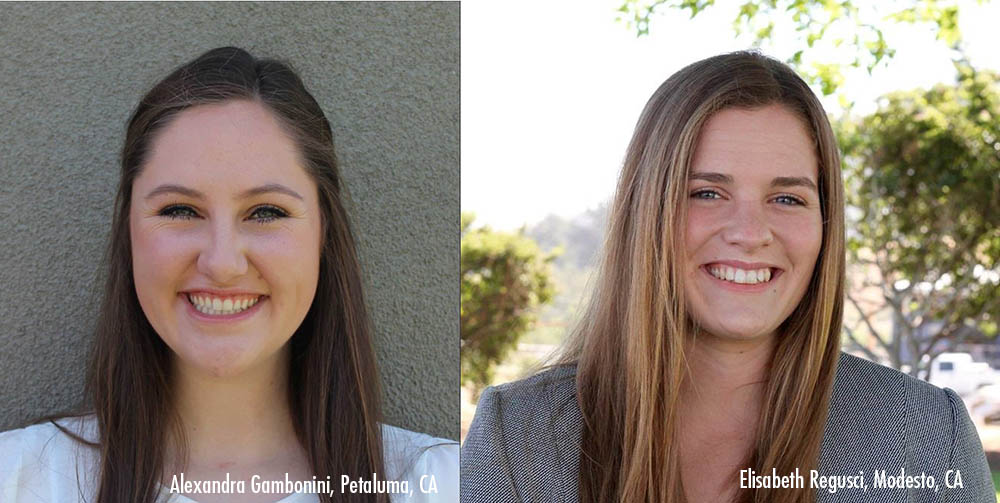 Alexandra Gambonini, also from Petaluma, CA, received two scholarships including the Merton Sowerby Junior Merit Scholarship and the McKown Scholarship.  Alex is a senior at Cal Poly double majoring in Dairy Science and Ag Business, and is the daughter of All West Board Member Frank Gambonini and his wife, Stacey.

Elisabeth Regusci, also a Cal Poly senior, is majoring in Dairy Science, and was the recipient of the Merton Sowerby Junior Merit Scholarship.  Elisabeth and her family reside in Modesto, CA.

From all of us at All West, CONGRATULATIONS to this year’s National Dairy Shrine award recipients!  Your individual contributions to this great dairy industry are truly legendary!