Meet the Breeder of 7CA11 FAIR LUCKY 1A 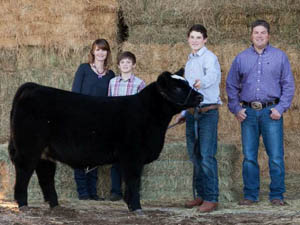 Fair Cattle of Denair, CA, has given you such bulls as Hot Spot and Italian Stallion. But there’s a new bull on the horizon, 7CA11 FAIR LUCKY 1A.  Meet the breeders of this exciting club calf sire.

“Put yourself in the PURPLE!” That’s the message you’ll see on the Fair Cattle website and that’s a promise that’s been delivered! Todd Fair and his wife, Christi, have a very successful club calf operation in Denair, California. Helping out with day-to-day work are the couple’s two sons, Weston (16) and Treyton (13). The Fairs have about 55 mother cows with most of their focus directed at raising club calves and maternal genetics to make them.

Things have gone well so far for the family, producing such well-known bulls as Liquid Courage (by Irish Whiskey); Don’t Stop Believin’ (by Believe in Me); Fair Gravy Train 8A (by I80); and developing Hot Spot (a Heat Seeker son purchased at 2-months of age by Todd and then later leased to Select Sires) 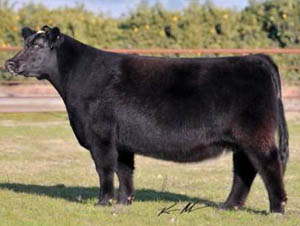 Italian Stallion and Lucky are both sons of Man Among Boys from the Dr Who daughter, Fair Wicked Harriet 902W. The great news in all of this? Select Sires has leased LUCKY and is currently marketing semen on this impressive young bull! “We purchased Lucky’s granddam out of the 2005 Right Direction Sale in Iowa from Putz Cattle,” explained Todd. “She was purchased for an addition to the herd as well as a show heifer for Weston

Fair Wicked Harriet 902W (Lucky’s dam) came along as her third calf in 2009. We knew she was special from the minute she dried off. She is now a 5-year-old and looking better than ever!” Harriet has proved to be a true “cash cow” as 10 of her calves have already been sold to the tune of $80,000, including four sons headed to AI. She’s a very fertile cow with a perfect udder according to Todd. In fact, “unlike a lot of other club calf bulls, I won’t be scared to keep his daughters as replacement females because of how well Harriet has performed.”

Lucky made a trip to the famed National Western Stock Show in January this year and made more than a few friends before officially joining the Select Sires Beef Lineup. “Lucky was very well received in Denver, being admired by some of the best cattlemen across the country for his power, look, soundness and great disposition. It was a lot of fun for myself and Weston to be able to show him off as well as meet fellow breeders from all over the country. Hopefully we can do it again!”

When we asked Todd what beneficial traits he thought Lucky would transmit, he listed traits that club calf breeders are seeking to make valuable show steers – power, bone, hair, depth of body, a really extended front end, and sound as a cat. “Lucky is geared mostly for the club calf industry. Being out of a proven cow and one of the most popular club calf bulls today in Man Among Boys, Lucky should definitely throw those types of traits, not to mention his cool color and great disposition!”

With cow performance this good, marketing Lucky to an even bigger audience seemed like the right choice. “The decision to work with Select Sires on leasing Lucky was an easy one. I had previously leased another bull, Hot Spot, to Select and that turned out to be a good partnership for both of us. Working with Brian House of Select Sires has been a great experience and I always enjoy visiting with him. Honesty and integrity are never in question when working with Brian or Select. I’ve also enjoyed the work Greg Schafer of Select has done in helping me to lease both of these bulls.”

Vice President of Select Sires Beef Program, Brian House, commented that the addition of Lucky to the lineup has been beneficial in so many ways. “Todd has been a great partner to work with. He understands how we do business and appreciates the Select Sires team. We are extremely happy to work with a bull of Lucky’s caliber and we are happy that Todd and his son, Weston, made the effort to display Lucky at the NWSS in Denver this year where he received rave reviews. Out of Todd’s Wicked Harriet cow, Lucky is bred to be special. He has a look, shape, pedigree and a disposition that’s in demand.”

While Lucky is currently being collected at JLG Enterprises a few miles north of the farm, the herd at Fair Cattle is surviving through one of California’s most epic droughts. As with other cattlemen across the state, Todd has had to make some difficult culling decisions based on the limited availability of pasture. He’s had to purchase nearly double the amount of hay he uses so far, and he’s not done yet. “With the current hay prices, that’s really going to cut into any profit margin for us,” he explained. “I had to get rid of some good cows who didn’t take AI and were caught by the clean-up bull. I also went through my replacement heifer pen more than once to narrow it down to the bare minimum I was willing to sell. We’ll have to wean our calves earlier than usual as we expect to run out of irrigation water in August.”

Todd sells his culls as commercial cattle and constantly keeps up on local markets, including auction yards and video sales. Through his careful study, he has realized the highest prices are paid on the large groups of calves that are uniform, consistent and good. “If I were to be in that market, I would think that by AI’ing large groups of cows to proven bulls to get a calf crop that is consistent in type, quality and size would be very beneficial at selling time.”

As it stands, Todd ends up with about 85-90% of his calves from AI or ET. They try to synchronize cows and either AI or put an embryo in, with repeat breeders getting bred AI one more time. Bulls are used after that, and “we may have a few more bull-bred cattle next year if Lucky is done at the stud in time!” Cattlemen who want to choose a bull that will produce stylish show cattle with power, hair and soundness, just might be Lucky this year. Select Sires Beef can offer all that with time-tested maternal results in Fair Lucky 1A.

To check him out, visit www.faircattle.com for videos of Lucky and his dam. Putting yourself in the purple isn’t so out of reach! Click here for more information on 7CA11 LUCKY,  or call your All-West Select Sires office at 1.800.426.2697.