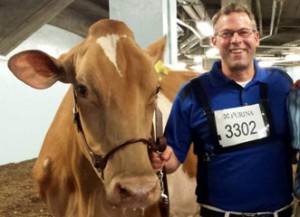 Meet Chris Lang, manager/owner of Springhill, a mixed herd of 270 Holsteins & Guernseys located in Big Prairie, Ohio.  Like many of his counterparts, Chris was active in 4-H and Junior Holstein activities growing up, and enjoyed showing, judging and breeding cattle from an early age.  A graduate of OSU-ATI, Chris took over management of the dairy from his parents, Tom & Karen Lang, who still live nearby and help out with daily chores.  Already with numerous accomplishments under his belt like serving as Associate Judge at World Dairy Expo’s National Guernsey Show, becoming a National Director for the Guernsey Association and serving as a member of the COBA Select Sires Board, Chris’ main focus is to breed a long-lasting, functionally correct, high producing herd of cows.  The dairy has undergone several changes since its inception in 1819, but those core goals have remained.

HUSKY graduated in April as a PGA sire, with a GTPI of +2135.  This FeedPro and Calving Ease bull offers a great balance of milk (+1203), high components (+.15F and +.05P) and type (+2.18).  Probably what makes him stand out as one of the elite Planet sons is his tremendous maternal line, the Hope family.  When Springhill was first established, it was a registered Guernsey herd.  In 1974, the first Holstein was purchased at a local sale; an open heifer sired by Penstate Ivanhoe Reflection.  The Langs bred her to Elevation, which resulted in Langacres Elevation Hope being born in November of 1975.  “Hope is, has, and always will be, the most profound brood cow for our Holsteins,” said Chris.  “Her family lines continue to be the dominant ones in our herd, and I’d say as much as 75-80% of the Holsteins trace back to Hope.  She was a once in a lifetime cow that had great udder quality along with dairy strength that has been passed down generation after generation.  Our first ad in the Ohio News many years ago featured this young, Good Plus Elevation with the title, HOPE FOR THE FUTURE…and that she was!”

For those that follow family trees, the branches to HUSKY are an interesting blend of sires.  Hope ended up becoming EX-91 GMD-DOM.  She had an EX-91 Glendell daughter who was also GMD-DOM.  The next generation was an EX-90 GMD-DOM Marshfield Elevation Tony daughter and then Langacres Cleitus Jewel EX-93 GMD-DOM (the same cow family that produced Ocean-View Durham Jewel).  Cleitus Jewel made an EX-91 DOM Thor daughter who produced a VG-85 Nick daughter.  The 7th generation in this line is a VG-88 Encore and then a VG-87 BW Marshall.  That leads us to the dam of HUSKY, Springhill-OH Iron Jeopardy, EX-93 2E, with a best record of 5-06 2x 327d 31,970 3.6 1166 3.0 964.

“Planet was the hot bull at the time, and we thought he’d be a perfect fit with Jeopardy,” Chris explained.  “She was a big, strong, great-legged cow…an ideal mating for Planet.  HUSKY has two full sisters, one which was sold, but one who’s still in the herd and is GP as a young cow.  She made over 38,000M as a second lactation 2-year-old and over 36,000M in her third lactation.  We’re really happy with her as she’s stronger and wider than some of our other Planets, but she always breeds back and exhibits that quality dairy strength that we breed for.”

Other daughters of Jeopardy that are doing well include a Bradnick bred heifer that’s due this fall and an Excellent FBI sister at Barry England’s in Pennsylvania.  Two Bowser daughters of the FBI are still at Springhill and are both potential EX young cows with “smashing udders.  They’re similar to the rest of the cow family – they breed back quickly, they’ve got great udders and loads of dairy strength!  Jeopardy was one of the greatest cows we’ve ever bred with a fantastic frame.”

“For me, HUSKY is the true representation of the Hope family through many different sires and family lines.  The nine generations of EX & VG dams behind him all had exceptional udders.  Encore infused some substance and width.  BW Marshall kept the milk production high.  Nick daughters had great udders…it’s all tied-in in a different way.  We’re milking several HUSKY daughters and he does exactly what his linear says he does – makes them with adequate size, with dairy strength, good feet & legs, and nice, square udders.  We’ll use him again because of his high components, calving ease, low SCC and strength.”

To add to the allure of the Hope family, Chris mentioned that there’s some nice young cows from all the branches of Hope by Atwood, Atlantic, Bradnick, Dickey (“Dickey worked really well for us”), Guthrie, Shamrock (“Great young cows”), Observer, Robust, Damascus, Bookem, Sanchez, Al, Paul, Braxton, Dempsey, Colt-P and Aaron.  That’s quite a variety, but as Chris says, it only adds validity to the family.  “Irregardless of the bull, the outcome is probably going to be pleasing to us. The family does it all.  We’ve worked with other brood cow possibilities, but we like the consistent results we’ve always seen with the Hope family.”  And it’s not just this way in Ohio.  In 2010, the Langs had a nationally recognized herd reduction sale and dispersed 250 head, of which 100+ were from the Hope family and are now spread across the country and doing well.
There’s more to the Springhill herd than HUSKY however.  Currently there are 80 milking Guernseys in the herd which have produced two bulls that are in the Top 15 TPI List for the Guernsey breed this proof round, both of which are homebred.  “We had Guernseys for over 100 years, and just recently re-introduced them to the herd.  I think what people are most interested in seeing when they come here is how we run the Guernseys and Holsteins completely together.  They milk, compete for feed and thrive in our commercial environment equally, and they’re excellent at utilization of feed.  We’ve had other breeds, but the Guernseys interact the best with our Holsteins because they’re of similar size.  It’s the best of both worlds as we get the milk from the Holsteins and the components from the Guernseys!”

“What’s also been a pleasant surprise is that the Guernseys are an excellent cross on the Holsteins because you can pick either Holstein or Guernsey for the second generation and make it work.  We’ve had some Holsteins that we couldn’t get bred and I’m not sure why it worked, but it did.  We’re running a business here and we must get cows pregnant.  If I have to go down the crossbreeding route to do so, then I will.  We actually have had two EX cows as a result of this crossbreeding, and both are milking very well!”

In 2012, Springhill was the Top Herd in Ohio for milk production for the Guernseys.  The next year, they earned 18 All-American or Junior All-American Nominations, and they’re off to a great start this year, as they claimed Senior & Grand Champion titles at the Ohio Spring Dairy Expo, as well a Junior Champion & Res. Junior Champion of the Junior Show, and Premier Breeder & Exhibitor banners.

If you can’t make it to the National Guernsey Convention that will be in the Lang’s home county next year, you can check out their accomplishments and more information about the Guernseys AND Holsteins on their Facebook page or their website, www.holsteinworld.com/springhill.

“It was a pleasant surprise for us to see HUSKY come out as high as he did this proof round,” concluded Chris.  “It shows you the strength of the Hope family and that they breed true.  They’re so well-balanced and we think they’ll survive and do well in any kind of environment.”  Sounds like the kind of “big picture” we’d all like to paint!