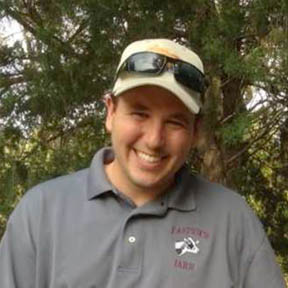 If you attended the 2011 National Holstein Convention in Richmond, Virginia, you probably had the chance to meet some of the Nuckols family. And if you went on the farm tours that week, you had the added benefit of visiting Eastview Farm in Beaverdam, where some of the most well-known brood cows from the southeast have come from. Even if you didn’t attend the Convention that year, you might recognize the Eastview name from some popular A.I. sires like Eastview Influence Mattie G, as well as Eastview Garret and Eastview Ernie (who were at one time the only maternal brothers to rank in the Top 50 for Type). Cow families have always played a big part in the development of the Nuckols’ herd, and their “people” family plays an even bigger role. Family owned and operated, Eastview Holsteins has a herd average of 23,000M on 115 cows. We had the chance to sit down with one of the family members, Matt, and visit with him about their latest A.I. star, Eastview PASSION.

“Love Lady is one of the three most influential cows in our herd history,” explained Matt. “Over 20 bulls to enter A. I. trace back to her. Her family now branches out to eight generations VG or EX. I would describe Love Lady as a cow with high functional type. She had teats that were too long and lacked style but was a great example of dairy strength with great feet and legs. Like Love Lady herself, her offspring are high producing cows that frequently end up as high Very Good young cows.” “The Planet mating on Inva was a mutual decision for a mating contract. We had a Planet full sister to Passion that was a VG 2-year-old that we lost to mastitis in her second lactation. Inva’s full sister, Ice Cream, had five Planet daughters, of which four were/are VG. Inva has an EX Bolton daughter that has VG 2-year-olds by Freddie and Domain. A couple of our highest heifers are Headliners out of the Freddie.” PASSION, a Calving Ease and FeedPro bull, writes a very nice first proof with +2077GTPI, +1585M +611NM$ and +1.81T. With a +1.86 Udder Composite ranking, it’s easy to see where that comes from with outstanding numbers for rear udder height (+2.52) and width (+2.32), fore attachment (+2.35) and udder cleft (+3.21).

So is this new Planet son a true representative of the Love Lady family? What does his proof reveal about strong family traditions? “The first thing that comes to mind is all of our Planets from that family have very short teats so that’s not consistent with his proof numbers. The family overall has been extremely consistent at making good milking young cows that score VGMS in their first lactations. They often score 83 or better first lactation and develop into high VG cows. True to Love Lady herself, they usually lack style or flash but are balanced, strong cows that produce and reproduce efficiently.” The Nuckols’ are still working with several members of the Love Lady and Mattie G families, with a greater focus on their younger animals. In fact, Matt said they genomic test all their calves and have done so for three years now. “We’re also working with a portion of the herd with a focus on show-ring type and most of those animals trace back to an EX-94 3E Lheros.

Recent flushes have been done on daughters of Supersire, Massey, McCutchen, Headliner, Petrone, Clark, Gold Chip, Freddie and Mogul.” Matt, along with his cousin Taylor, work together on the breeding and marketing program and as Matt jokes, “I couldn’t do it without him and he couldn’t do it without me!” Genetics from today’s herd truly represent a family owned and operated business.

The Eastview herd has long been known for high-producing, long-lasting cows. They were the definition of “Productive Life” before it even became a buzz-word for today’s proving system.

PASSION will follow suit with his good balance of production and type, a +5.2 rating for PL and generations of performance from the Love Lady family. Breeders from around the globe will be able to benefit from the strong maternal influence this Planet son will deliver! Beyond the cows, Matt has been extremely active in local Holstein activities, judging schools and most recently with the Young Dairy Leaders Institute (YDLI). The well-spoken ag activist does an excellent job connecting the farming community with consumers and legislators, which is a benefit given their close location to the state’s capital.

You’re free to email Matt directly and get more feedback on this true-breeding family behind PASSION. He can be reached at eastviewfarm@msn.com.