Planning the Future of Skyridge Farms with Optimal Genetic Pathways

In today’s world, there seems to be more uncertainty than ever before, both in the dairy industry and beyond. Despite the unknown, our team of All West/Select Sires professionals work diligently to solve producer’s problems and thrive off of answering their important questions. Yet, we are unable to answer one of the most common questions today,

“What will the dairy industry look like in the future?”

Dairy producer Dan DeGroot ponders this question often, not only for his farm and the state of Washington, but also for the United States as a nation.

Dan moved to Sunnyside, Washington from California in 1990 and started Skyridge Farms. In 2003, Dan recognized that if he wanted to continue to be successful in the future, he had to put a major emphasis on sustainability. Among other things, Dan built a second barn on the same farm to facilitate the desired growth of his herd. His goal was to create a holistic, integrated environment that developed employees, increased cow comfort and restored the environment, and that is exactly what Dan achieved. In 2013, Skyridge Farms was honored as the 2013 Winner of the U.S. Dairy Sustainability Award for Outstanding Dairy Farm Sustainability.

Today, Skyridge Farms is milking approximately 3,000 Holstein cows and although they have not experienced expansion of any kind in nearly ten years, Dan is now challenged with planning the future of not only his herd, but also the management of his dairy, as his son-in-law is interested in officially joining the family business.

Although we cannot predict the future of the Skyridge Farms’ herd and business, All West/Select Sires specialists have offered Dan a customized herd management strategy through our Optimal Genetic Pathways (OGP) Parentage Planning Service. This calculator tool aims to maximize profits in the next generation to meet each herd’s individual goals, so the dairy not only survives but thrives well into the future.

This tool was first introduced to Skyridge Farms by former All West/Select Sires employee, Brett Mackay, and Dan was interested in taking advantage of the service right away.

“When sexed semen came in to the market, it turned our breeding programs upside down,” said Dan. “Most dairy farmers were intrigued, but wondered, what do we do with it? Obviously, the ability to produce a heifer calf out of cows is a strongly desired feature, but we immediately started realizing we were producing more heifers than we needed for herd replacement.”

However, Dan admits it didn’t take long to produce an excess amount of heifers for their dairy, as the opportunity to sell them for profit dropped rapidly. “It was very profitable to sell heifers at the introduction of sexed semen, but it did not last very long, as we knew it wouldn’t when sexed semen use continued to increase,” said Dan.

This led Dan, and fellow dairy producers alike, to wonder how to most efficiently use sexed semen, as well as beef semen, in their breeding programs. “I was very interested in OGP early on because we were struggling to keep our heifer herd to an appropriate size and we realized we needed to get our number of heifers under control. If we don’t have a desire to grow, we can’t have extra heifers around. Furthermore, the heifers we do produce, need to be high quality from our best genetics to improve our herd.”

With the help of our highly-trained staff of OGP experts, Dan was able to set up a complimentary OGP evaluation at the dairy. This initial introduction led to a much closer look at the data with recently retired All West Dairy Program Specialist, Bill Van de Graaf. 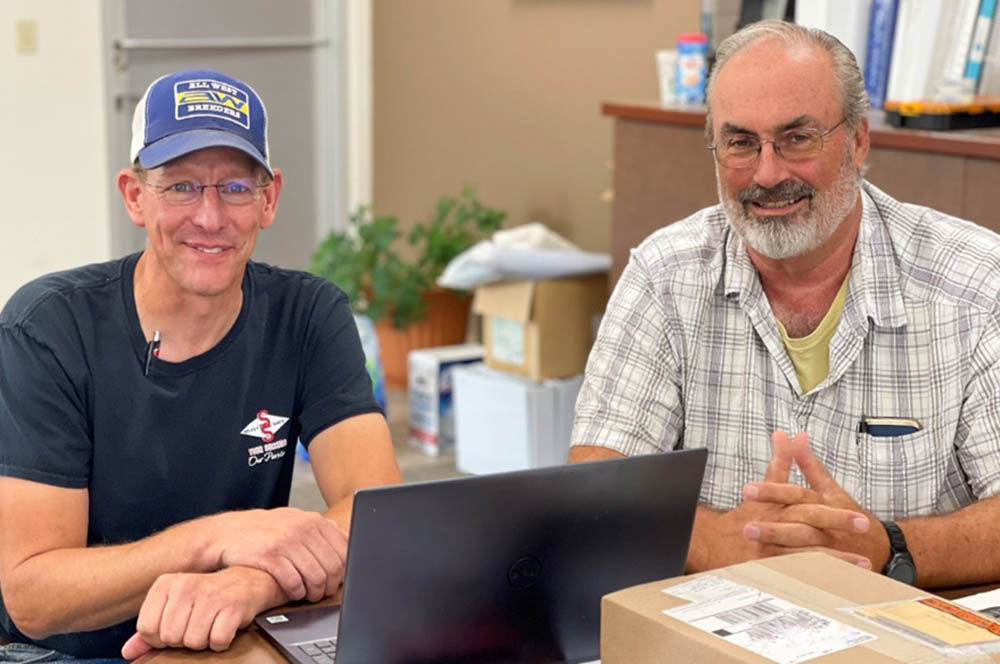 Today, All West Dairy Program Specialist Randy Van Wieringen is responsible for providing Skyridge Farms with a yearly OGP analysis, along with value-added, quarterly adjustments for seasonal effects and reflections on previous month’s performances. Randy was actually hired by Dan in the late 1990’s as his first herdsman on the farm and continues to be one of his most helpful team members today, as part of the All West Family.

After several years of using this tool, they are making less “big changes” and instead focusing on “fine-tuning” the breeding program, according to Dan. Together, Randy and Dan sit down every four to six weeks to make adjustments as needed, based on conception rates. Dan shared that following a season of “phenomenal conception rates” extreme heat hit the Pacific Northwest this summer, causing major fluctuation in their breeding success. This fall, he was able to make the necessary adjustments with Randy to ensure the dairy has an adequate number of animals for their future needs.

“We are starting to get better control of our heifer numbers,” said Dan. “At this time, our goal is to remain static. We just want replacement heifers, and we don’t want any excess. Our cost of raising heifers is very similar to the cost of what you can buy a heifer for. We are not interested in selling these because that does not currently make us money. We are trying to balance our heifer program against our herd size and not have any additional heifers.”

Dan plans to always have a few extra heifers, but strives to keep this number low, and notes that with the help of OGP, he is able to maintain this very limited inventory.

“With the way the milk prices have been the past several years, it is certainly not economical for us to raise excessive heifers in our herd if we don’t have a specific use for them. We also look closely at what our herd turnover rate is. We can drop that a percent or two if we get a little bit short on heifers,” said Dan.

As mentioned, the primary reason Dan began using Optimal Genetic Pathways was to determine how to best use sexed semen, without overwhelming his dairy with heifers. However, he has since noticed additional benefits to using this tool.

“OGP also allows dairy producers to work together to achieve their goals. For example, if a fellow farmer were to come to me wanting to buy animals, I could accommodate that by dialing in exactly how many he wanted per month and making those animals for him,” explained Dan. “Not to mention, selling the beef x dairy calves more than pays for the costs of using sexed semen. It does not necessary make us profit, but it is a revenue stream to allow us to break even while using more efficient genetics.”

Though the future is uncertain, one thing is for sure; Dan plans to continue working with All West/Select Sires as his trusted advisor in genetics. “I’ve been a customer of All West since I moved to the state of Washington,” said Dan. “All West has had the best management team in the industry, as well as the best service from technicians to evaluators to specialists. They work well with dairy farmers to help us succeed. It has been a well-run cooperative, so there’s a return on our investment not only in our herd’s genetics, but in patronage payments, which has been very helpful.”

As this futuristic farmer continues to plan for the future, he is grateful for the Optimal Genetic Pathways tool. “It truly allows us to get a glimpse of the future, years down the road. It’s a good tool to help us pay attention, look ahead, make changes, and fine-tune our future,” said Dan.

Contact your All West Representative today to set up a complimentary Optimal Genetic Pathways (OGP) evaluation at your dairy!