Kevin Jorgensen, has been busy this year traveling across the U.S. and Canada, seeing hundreds of daughters of Select Sires’ bulls…and he’s taking us along on the trip!  Check it out! The most rewarding part of sire acquisition is having the opportunity to visit farms across North America and visit with breeders and producers.  The continual need of our Sire Team to “get our shoes dirty” is one of the reasons, we believe, Select Sires continues to offer the most elite genetics in the industry.

With all the coming changes to the TPI formula this August, rather than my normal predictions or prognostications about who the new graduating class may be, I though perhaps a better view would be to highlight what has been most interesting in my travels this spring and summer.

7HO12198 Kingboy No matter where I go, the most impressive cows I see are the Kingboys!  They are also the group that producers are most excited to show as well.  Coast to coast and north and south of the border, Kingboy sires consistent, no-holes daughters that pass both the eyeball and the DHI test.  Many are telling me how impressed they are with their will to milk and look good doing it.  The Kingboy daughters are not quite as extreme as the McCutchens; although above average in stature, they are not giants and are harder across their toplines than the McCutchens and a bit wider and flatter in the rumps.  Additionally, the Kingboy udders have great udder attachments and the soft udder quality that should make great mature cows.  If I were to protect them anywhere it would be in rear legs as I see them a bit close at the hock.  However, he makes a great cross on the Robust and Mogul bloodlines and is a bull that, if proven sires are your chosen path, I would definitely keep in your breeding program.

7HO12165 Montross After spending a quarter century in the AI industry, there has never been a daughter group in my travels with as much will to milk and do it from such great udders as Montross.  Several are now fresh for the second time and are developing very nicely.  Montross daughters are very average in size, but have adequate width of chest and enough capacity to produce as much as they do.  Additionally, their udder quality is phenomenal and his daughters have the ability to get back in calf, even with that uncanny ability to milk.  He is truly a “hall of fame” kind of bull that will have massive influence in the years to come for Select Sires.  If you have never taken the opportunity to use this breed leader, I would use him six days a week and twice on Sunday!  With a Planet and Shottle free pedigree, he still fits on a wide range of cows.

7HO12418 Spark has been one of our highest selling genomic young yires the past year and a half.  I am pleased to say, there shouldn’t many disappointed in that choice once the Spark daughters begin to calve.  Without a doubt, he is Supersire’s best udder son.  Like his dam, Webb-Vue Gabor Mycala EX-91, they are calving in with marvelous, well-attached udders and walk comfortably on their rear legs as well.  Mycala is still milking well at Webb-Vue and is making a HUGE record in her current lactation. I have seen more than a dozen in my travels and every new one looked like the last one.  His pattern is very consistent, siring extreme udders that have great quality and texture to their udders.  His Mogul-free pedigree make him a logical cross to Mogul daughters and granddaughters.  His daughters can get a bit high in the pins and he should be protected there.  I see Spark as a customer satisfaction sire that will sire trouble-free cows that will thrive in any environment.

7HO12139 Pety Several international groups travelled to Wisconsin this summer, and one of the most impressive groups of daughters they have seen were the Petys, with many now calving for the second time.  To say he is an udder specialist would be an understatement.  He flat out sires udders as well as any sire in the breed!  He also sires a more moderate sized cow that many producers are looking for today.  Whether it was in the Midwest, New York, Washington or Canada, the Pety daughters look the same no matter where my travels have taken me.  We didn’t sample as many Pety sons as some sires but sometimes “quality versus quantity” wins and his highest son, 7HO12600 Modesty, will have a major impact of the industry.

7HO12422 Aicon I was always a big fan of Aicon’s VG-88 Bookem dam in a commercial free-stall environment in Northeast Wisconsin.  She had a huge will to milk and was always at the bunk.  His early daughters are now calving and I haven’t seen a disappointing daughter yet.  They have the same will to milk and yet their udders are way above the hock and look to be ideal for the modern environment.  Aicon is the sire of 7HO13461 Remington, whose full sister is off to a great start as well!  This high fertility sire should make lots of happy customers, with the added bonus of being an A2A2 sire, WellnessPro designated and a calving ease sire to boot. 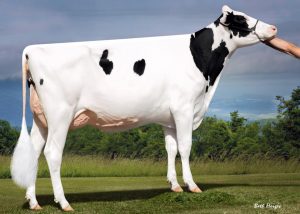 7HO12353 Beemer and other Selections daughters Beemer has been a shining star in Showcase Selections over the course of the last year or so, and now his daughters have been catching the eye of everyone that sees them fresh.  We knew he sired fancy heifers with great frames but his ability to sire fantastic udders may be more impressive than the frames.  I have seen nearly 20 milking and the first thing I always see is an impressive udder.  They have lots of veination on their udders and great height and width of rear udder.  Additionally, they are paying the bills as well, with many of the daughters milking well over 100 pounds a day.  Bulls that perform like Beemer make us confident in the genomic prediction to select the next generation of Showcase Selection sires from their genomics. 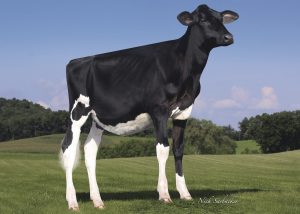 Another group of heifers that continue to impress everyone are the 7HO12587 Diamondback calves. He sired many heifers at the top of the class in both Black & White and Red & White classes.  They have the look of good heifers that will make great cows. And, he has a right to be that way, as Diamondback himself is the most impressive young bull at Select, classified EX-93 at just 3 years and 2 months old.

In closing, the quality of young cows across the country continues to improve and we are living in times of unprecedented genetic gain. Regardless of what formula or rankings you use to select your mating sires from, I can confidently say that there will a Select Sires bull at the top of that ranking to meet your genetic criteria.  August promises to be another exciting sire summary and will include perhaps the most exciting group of new Genomic Young sires ever released at one time.  I hope the rest of the summer and fall are successful for each of you and I look forward to seeing many of you in my future travels!