Select-Sired Win at National All Jersey

All winners of major production awards at the annual meetings of the American Jersey Cattle Association (AJCA) and National All-Jersey (NAJ) held June 24-27 in East Peoria, Ill., were daughters of Select sires.

The President’s Trophy was presented to Highview Valentino Paula (VG-86%), a daughter of 7JE1038 All Lynns Louie VALENTINO-ET. This award was first presented in 1923 and since 1990 recognizes the cow completing the top record for ME pounds of protein. Paula produced 1,512 pounds of ME protein in 2014 and is owned by James Oelfke and Family of Hamburg, Minn. 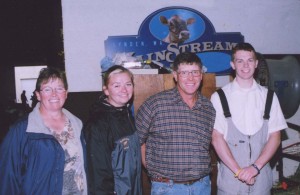 The Leading Living Lifetime Production Contest recognizes the cows alive as of December 31, 2014 that have produced the most Milk, Fat and Protein. Mainstream Jace Shelly (E-91%) captured the Ogston Farm Trophy for producing the highest amount of Milk in her lifetime (318,540 pounds), the High Lawn Farm Trophy for the most living lifetime production of Fat (15,758 pounds) and the Edyvean Farm Trophy for the most Protein (11,837). A daughter of 7JE535 Windy Willow Montana JACE, she is owned by Randy and Jana Kortus of Lynden, Wash. The top 10 cows in each category for living lifetime production of Milk, Fat and Protein were honored and of the 30 cows, 21 were Select-sired including daughters of JACE, 7JE254 Mason Boomer Sooner BERRETTA, 7JE399 Al-Top All AMERICAN, 9JE172 Eastglen Alf KLASSIC-ET, 7JE356 Lester SAMBO, 7JE290 WF/L&M Duncan BARBER-ET and 7JE605 Sunset Canyon MECCA-ET.