The Sound of Tradition

Over time, customs or beliefs are passed on from one generation to the next in hopes that a tradition will be born; an unwritten law that many can cherish before they, too, pass on this heritage to future generations. 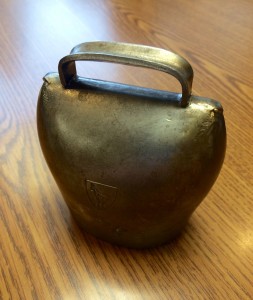 For over 40 years All West has participated in a tradition that I would consider unique. Found resting quietly upon our front office reception desk you will find an old, slightly tarnished, Swiss cow bell. As a passerby, some may assume this hidden gem to be a simple decoration.  But this little bell chimes a sound that brings everyone together, if only for a few short minutes each day.

Originally the bell was purchased in the early 1970s by Jerry Strandlund, who  was the Advertising Manager for All West Breeders at the time. He had found the bell in Europe during a trip to look for new sires. The bell was intended as a gift for the women in the office, but it would become much more over the years.

Neatly engraved with the Pyramid Goat symbol, this nearly half century old bell chimes once at 10:00am and again at 2:45pm sounding out break time for all office dwellers. These coffee breaks are cherished among those at All West, providing a chance for individuals to unwind and converse with one another…maybe even share a few laughs along side a quick snack.

For 75 years at All West/Select Sires, we have strived for a family oriented atmosphere that makes our employees and member/owners feel at home. This cowbell is just one of the “customs” that has brought countless people together to share in one of life’s greatest treasures, fellowship. 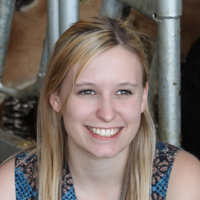