A 33% pregnancy rate.  A 50% conception rate.  Pretty impressive numbers that don’t come easily.  By paying attention to details, and not being afraid to question the status quo, Alvin Groppetti used his gutsy questioning to improve not only herd performance, but his bottom line. 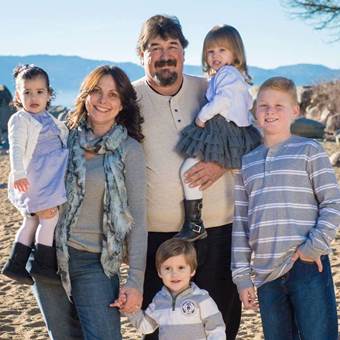 Alvin was born and raised on a registered Holstein dairy in San Joaquin, CA, Kam-Ja Holsteins.  Nationally known for their breeding success, especially with Red & White Holsteins, the Groppetti family was very active in state Holstein activities and among other awards, earned Premier Breeder honors two consecutive years at the highly competitive CA State Show.  “I grew up learning the importance of paying attention to your breeding program.  My dad was one of those guys…Hank Van Exel is one of those guys…Buddy Fleming, who’s a magician with clippers, he’s one of those guys. They’re the ones who study pedigrees and develop generations of great cows and cow families.  And even though I’m now milking a herd of cows that’s not registered and not purebred, I still like, and appreciate, having good cows to work with.  And I appreciate what it takes to make bulls that sire good, reproductively sound cows.  Paying attention to my reproductive program means something to me.  If I was just breeding junk cows and using junk bulls, why do the job?” 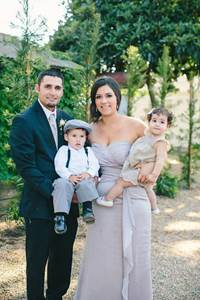 Alvin now owns a dairy in Galt, CA, with his wife, Traci.  Son-in-law, Derek Castro, is the herd manager and runs the day-to-day operations.  Derek and his wife, Charlotte, have two children (Gavin & Gianna) with baby #3 due any day!

The herd consists of 400 Holsteins, Jerseys and crosses with a current herd average of 9 gallons of energy corrected milk (approximately 78lbs).  “My business plan has changed from my purebred Holstein roots.  I now ship milk to a cheese plant, so I decided to use crossbreeding in my herd.  I started off with a lot of Holstein/Brown Swiss crosses as my foundation.  We kept mixing in Jersey semen, and now I’ve got to admit, the Jersey/Swiss cross is the best ever.  You get the feet & legs and strength of the Swiss on the production of the Jerseys.  It’s magical!  And my main goal is cheese yield, so I’m happy with my current 4.5% fat and 3.7% protein tests.”

Who has time to pay attention?
So what about the reproductive success that the Groppettis are enjoying?  How did the 33% preg rate and 50% conception rate come about?  Alvin has a keen interest in genetics, having been an A.I. technician himself for 18 years in the Escalon/Oakdale area of California.  Prior to February 2014, all breeding was done in-house and there was no Select Sires semen used.  “I’m a veteran of the A.I. industry, but I just didn’t have time to focus on everything.  We had a 19% preg rate going, but I was giving a lot of shots to get there and had too much on my mind.”

All West’s Kevin Lincomfelt works tirelessly to improve reproductive health at the Groppetti Dairy in Galt, CA.  Current numbers reveal a 33% preg rate and overall herd conception rate of 50%…and they’re not done yet!

Enter All West certified A.I. technician Kevin Lincomfelt.  Living just down the road from the dairy, Kevin got to know Alvin by stopping in and walking cows with him quite often.  “We don’t always have an agenda when we stop in to see dairymen,” he explained.  “I started visiting with Alvin just to learn about his operation and find out how/why he breeds cows the way he does.  One day, I just happened to be in the right place at the right time and got an opportunity to start breeding.”

When Kevin started working with Alvin and Derek, the original preg rate goal was 27%, and they’re now at 33%.  How did they get such a drastic improvement?  “Kevin is thinking about one thing, and that’s improving reproductive performance in my herd.  I’m thinking about 20 things at once.  More people ought to use certified A.I. technicians.  That’s their profession.  It’s their specialty.  So when we decided to focus on improving our preg rate, I turned the ball over to ‘the quarterback’ of our team.  Sometimes breeders get too much credit, but sometimes they get too much of the blame too!  In this case, Kevin worked well with Derek and I, and also with our nutritionist and vet.  It’s a team effort.  It’s the rations we produce, the way we raise calves, the condition of our transition pens and the comfort of our facility.  If cows are overcrowded or not kept on a consistent program with good feed, reproductive efficiency will suffer.”

As the team was carefully scrutinizing all parts of the dairy, a decision was made.  “We decided to give our cows a little more time.  We used to average a 22-month age at first calving, which meant that some heifers were as young as 20-21 months of age, and they just weren’t quite ready.  We also used to have a voluntary wait period of 50 days, but decided to bump that back to 60 days.  Letting the heifers age just one more month before breeding and waiting just 10 more days to breed after calving ended up being huge decisions.  All of a sudden, they’re all in better condition!  By choosing to invest in a little bit of extra time now paid off in the long run.”

Kevin agrees.  “That 14 point jump in preg rate (from 19 to 33) pays for a month of feed…we really don’t even lose it.  Cows come in and get pregnant right away and they’re in great condition!  We used the All West economic cost calculator to do a rough estimate of savings and this preg rate jump is worth about $50,000.”

Conception rate has also taken off and is about 64% on the 2-year-olds, with a 50% rate on the entire herd.

“When the milk price is in the toilet, you’ve GOT to have pregnant cows,” said Derek.  Alvin agreed.  “If you have a cow that’s 200-250 days open, she’s getting to be worth butcher price.  If she’s got a calf in her, she’s automatically worth more.”

You want powerful cows that milk and stick around for a long time?  The breeding program at Groppetti Dairy is just that! “There may be one or two bad-uddered cows in the whole herd,” said Alvin Groppetti.  A strong focus on components and udder composite numbers have paid off on this crossbred dairy.

Alvin, Derek and Kevin talk about the potential bulls to use in the herd, and have a pretty strong allegiance to using only positive fertility bulls (“there are enough good bulls to use with positive fertility that you shouldn’t have to compromise!”) and high component sires.  Bulls also need to come from good cow families.  “We don’t even talk about udders anymore…that’s a given! Honestly, we’ve got one or two udders that aren’t really good, but that’s about it.  Your milkers will weed out the bad-uddered cows.  If a cow doesn’t milk out well and evenly in all four quarters, the milkers will kick them out, as well as the mastitis cows, ” said Alvin.  “Do they settle?  Are they from a good cow family?  These are the things that matter to me.  When the price of milk goes down, people automatically want to use cheaper semen.  Then when the price of milk goes back up, they go back to using better quality semen.  I would rather keep breeding a consistently good herd of cows no matter what the milk price is doing, because we’re in this for the long run.  I don’t want to compromise on the progress we’ve made by using the genetics we have in the past.  We’re trying to grow our herd, so if I can make longer lasting cows, that will not only help my expansion plans, but I’ll have excess animals to sell when I need to. When we get to 500 and I have an excess of heifers, I’m going to love it!”

Other small details
Kevin and Derek worked together to change the tail-end pen to a fresh pen, so rather than focusing on the end of lactation details, they concentrated on getting cows off to a running start after calving.  That included such things as using BioFresh boluses on every cow, which “does cost more, but not in comparison to the performance we see from them,” explained Derek.  The ration also plays a big key in performance, and right now, Alvin has a lot of alfalfa going in as silage and dry hay.  Small management changes here and there have helped the team get herd performance really dialed in.

Monitoring herd information on his phone is manager Derek Castro.

The look of the herd is also changing, with about 85% of the semen used these days belonging to the Select Sires Jersey lineup.  “We are managing pens by size and will eventually have one pen of big, Holstein sized cows, and the rest of the pens Jersey-sized.  Jerseys work so well in our setup and they have held their value really well compared to the Holsteins.  We still have a strong market for selling pens of “gold cows” to Idaho.”

When it comes to genomic testing, Alvin thinks that might be a consideration down the road.  “Right now, I need to fill my place with good cows.  If we were averaging 1000 pounds of fat, then I might be willing to spend that kind of money to test.  But right now, I’d rather spend the money on semen as an investment and improve the consistency and performance of my herd.”

Results without the worry
“I rely on Kevin to be my main connection with All West/Select Sires and expect him to be highly trained, competent and knowledgeable on industry research and trends.  He’ll worry about my repro work and for any producer with so much going on, that’s all you need!”

Kevin appreciates the trust they have in him.  “It’s good these guys let me make decisions.  Obviously we’re doing well there’s no question of that.  But it helps when your customers trust you.  They know when I pull in the driveway, I’m getting things taken care of and they don’t have to breathe down my neck wondering what I’m doing every step of the way!”

Bottomline
Sometimes the simplest of things lead to the biggest returns on investment.  In this case, great teamwork between herd owners and All West technician Kevin Lincomfelt resulted in a common-sense, gutsy approach to changing things up at Groppetti’s.  The trio wasn’t afraid to try things without sacrificing good genetics.  The end product is a herd of reproductively healthy, high producing cows that work.  “I truly envision having 500 GOOD cows!  It will take time, but it can happen!  We’re just 12 years in the business, so we’re just getting started.  But when you start stacking good cows on good cows – it’s exciting!”

Thoughts on bull use at Groppetti’s Dairy

What do you think about Jerseyland Sires? That’s a good deal for us.  We’ll have a lot more bulls to pick from and between them and River Valley, we’ve got some new cow families to work with!

What are you milking a lot of right now? GALVANIZE.  We have some great ones and I’d take another 50 of them!  I put some heifer groups together this spring to help with cash flow, and they contained a lot of GALVANIZE and FASTRACK daughters.  Man, they were nice!