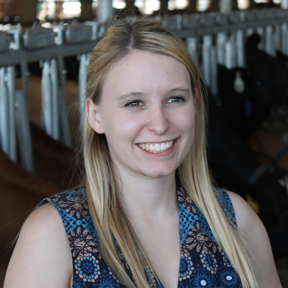 All/West Select Sires is pleased to announce the addition of Bailie Welton to the team as a Marketing Associate Intern. Bailie is a native of Washington and was born and raised in Redmond. She found her way to animal agriculture by earning a B.S. in Animal Veterinary Science -Dairy Science Option from the University of Idaho. Even though she does not come from a farming background, she states that she has “hopelessly fallen for the cows.”

Bailie can be found around the Burlington office doing a number of tasks ranging from writing projects to marketing/media assistance. Occasionally breaking free from the office, Bailie tries to get out and work with cows. “I love having the opportunity to go out and work with the farmers. Getting the chance to put a face to the name is incredible and really sets this company apart from others in the industry.”

Growing up in the city, Bailie didn’t gain much experience with livestock until her years in college; instead she spent her time  pursuing two other passions of hers, writing and martial arts. As a third degree black belt in Tae Kwon Do and a high ranking belt in Kempo, she is a force to be reckoned with. Her short stature may surprise you upon first sight on the farm, but don’t worry she can keep up with just about anyone. “Being 5-foot-nothing can have its limitations at times, but it has never stopped me from doing what I love.”

Bailie started work with All West in mid July.