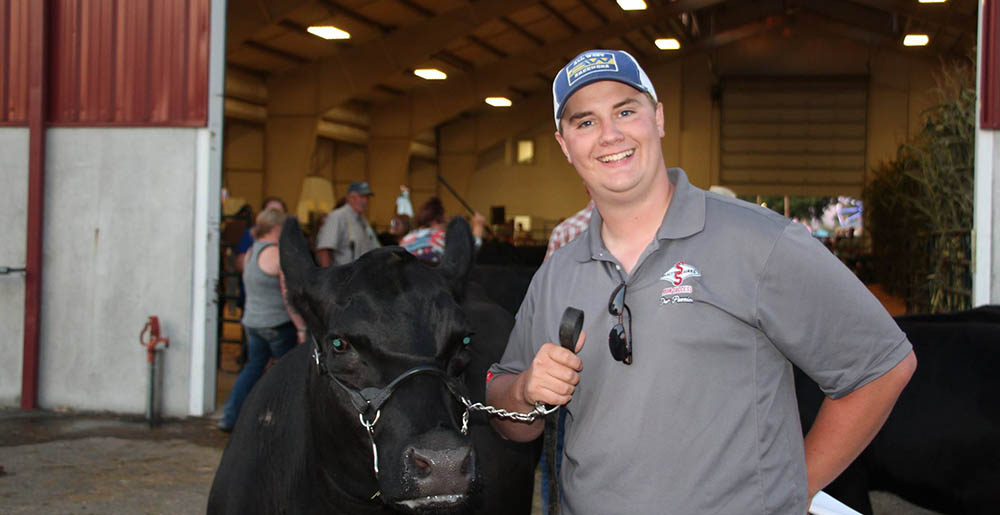 Kelby Stadt’s love for livestock, as well as the people who raise them, makes him one of our trusted All West Sales Representatives! His dairy experience began at a young age when he started feeding calves after school on his family farm. This interest led him to study at Washington State University to earn a degree in Animal Sciences. After college graduation, an internship with All West/Select Sires allowed him a great experience and industry connections which turned into a full-time job opportunity. Kelby has worked as an All West Sales Representative in Whatcom County of Northwest Washington since 2016.

“I do my best to listen to our customer’s needs. I strive to bring attention to bulls that may be slightly outside of their selection criteria or that they may have overlooked. I like educating my customers on new traits to continually improve their herds in all aspects including production, health, and functional type to create the best cows for them. Lately, there seems to be increased attention paid to leg set, teat length, and A2A2 beta-casein profile. I love the improvement in animal welfare provided by the Zoetis and CDCB wellness traits, moving our cow herd towards less management intervention and healthier overall cows, which is great for farm management and milk consumers alike.”

“More recently, I enjoy utilizing genetic audits to show customers that their genetic investment works within their own herd and then selecting bulls to meet the customer’s criteria. Genetic audits have opened my eyes to the role of genetics within a herd, and even changed my perspective on traits with low heritability, where previously we may have blamed challenges on herd management, as opposed to accepting the blame for less-than-desirable genetics. Most recently, All West Representatives have been using the Optimal Genetic Pathways tool, which allows us to comfortably control heifer inventories and produce a valuable beef calf, while using the Select Mating System or genomics to select the best animals to create replacements from. I am fascinated by the rate of genetic gain made possible by placing selection emphasis on the replacement females entering a herd. I enjoy presenting the genetic opportunities that are available to my customers.”

“One of my favorite privileges is seeing daughters in production and looking at how well they are producing. Whether they want show winners, big producers, or high scoring cows, it is always very satisfying to see cattle that are working well for a customer.”

7HO12787 KING ROYAL – He had a great proof day in August 2019 and I can’t wait to see some daughters in production, especially since I love his dam! 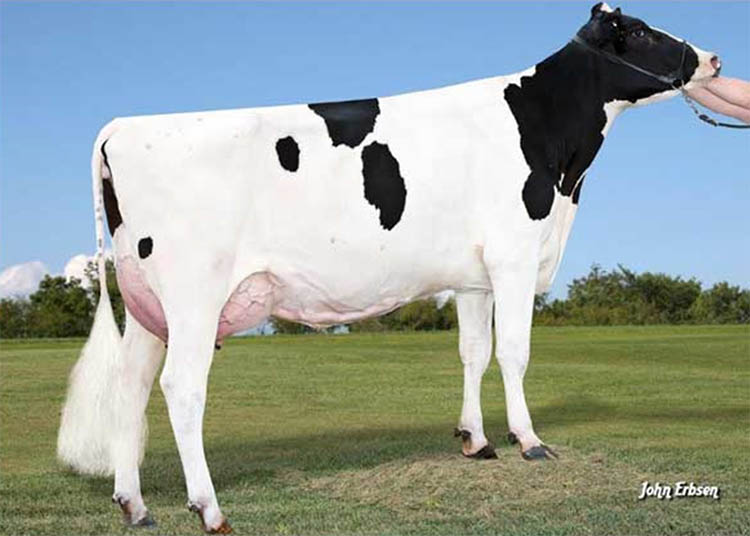 14HO14863 REY and 7HO14401 CASCADE – These two sons have been in high demand since August proofs. I anticipate REY being slightly more popular in my territory with his A2A2 beta-casein. Both of these bulls should sire cattle that will be appealing to the eye with some openness and strength, wide flat rumps and appealing legs that aren’t extremely straight.

7HO14402 EXCALIBUR – Let’s not forget this bull with tremendous type and a .22 fat percentage and over one thousand pounds of milk!

7HO12897 SAMURI and 7HO12898 SUPERSPRING – These intriguing full brothers continue to be popular. They have been conception rock stars with easy to use linear predictions. I have seen some yearling heifers and am extremely pleased with their development. I’m anxiously awaiting these two bulls to receive a daughter proof.

Exciting daughters of newly proven young bulls in the fresh pens include:

7HO13373 FLAGSHIP and 7HO12115 DECEIVER – Both bulls have been welding on udders and are proving to be tremendous outcross calving ease bulls to be used easily in the heifer pens with great conception reports! 7HO12344 RAGER-RED is an extremely underutilized bull. I was able to see him on parade at the 2019 Select Sires Inc. National Sales Conference and he is a tremendously strong and deep bodied bull with a moderate frame. Looking at his linear, he has been creating extremely functional, sound daughters, with some leg set. He boasts positive component percentages while over one thousand pounds of milk. He is in our top fifteen proven bulls for DWP$, as well as being an A2A2 option.

When customers ask for calving ease Holstein bulls, I’ve been delivering these three:

7HO14674 SPARTACUS – He’s an A2A2 beta-casein bull who can be used on a variety of pedigrees. He adds set to his daughter’s legs, plus he adds some strength and rump width to his offspring with a 5.1% sire calving ease! If you like pedigrees, be sure to look at his high scoring dam, maternal granddam and maternal great granddam!

250HO14605 TROPIC – Consider TROPIC to breed to the show heifers in your barn. I love this bull’s linear  and his elite DWP$ will enhance his usability.

250HO14274 DEREK – Looking for a calving ease bull with a slightly different pedigree? DEREK could be your bull! This A2A2 beta-casein sire holds solid DWP$ rankings while maintaining beautiful well-attached udders on his daughters… plus he is a little over break-even on teat length!

7JE5004 CHROME – He is still a solid bull to use! What more could you want with daughter proven accuracy on his combination of production and type? 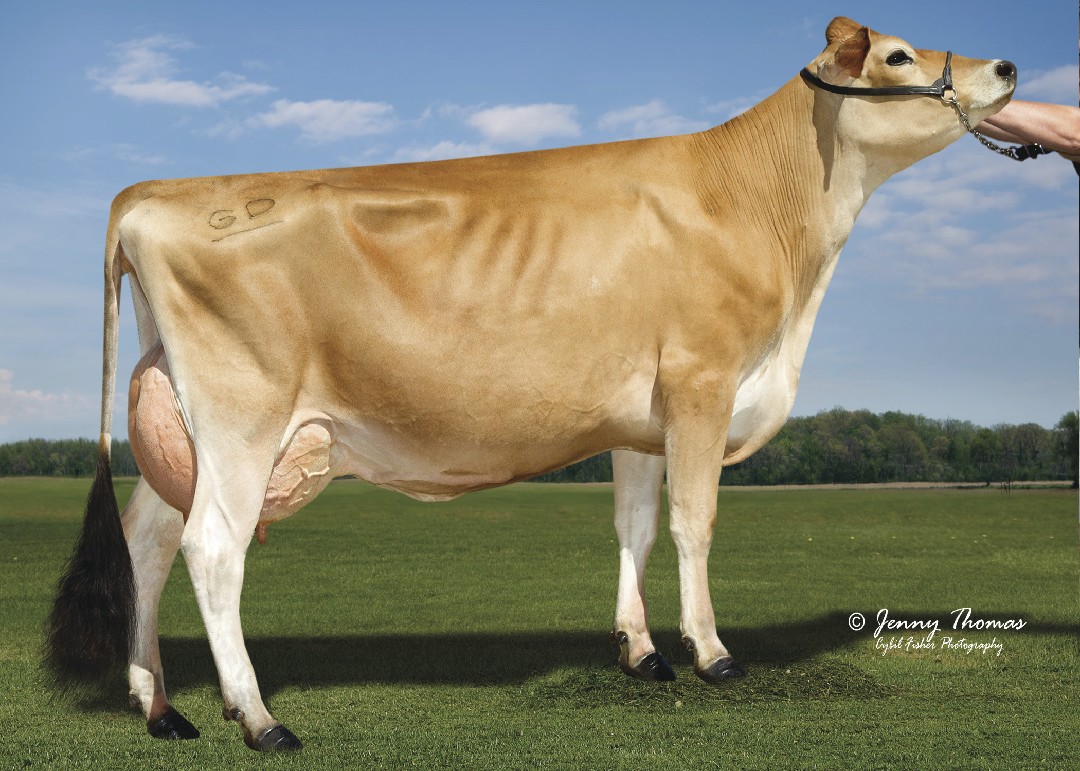 7JE1699 JX PINE {6} – This bull has been seeing a lot of use, as well. I love his fat and protein percentages, with outstanding udders and potentially his best feature of all, a positive DPR! Newer to the Jersey breed are the Zoetis Wellness traits and PINE steps up and checks that box, as well. For healthy, easy keeping cows that will pay the bills, order PINE!

Three other Jersey bulls that have been in demand since August are:

250JE1511 WILDCAT – Although semen is no longer available from this bull, I must give a shout out to our customer Mainstream Holsteins, Jerseys, and Ayrshires of Lynden, Washington for recently exhibiting this stunning daughter! Mainstream Wildcat Sunset earned the title of Reserve Grand Champion of the recent 2019 Northwest Washington Fair. WILDCAT daughters are starting to enter milking strings throughout my territory. They are nice uddered, solid young cows that should only get better with age. 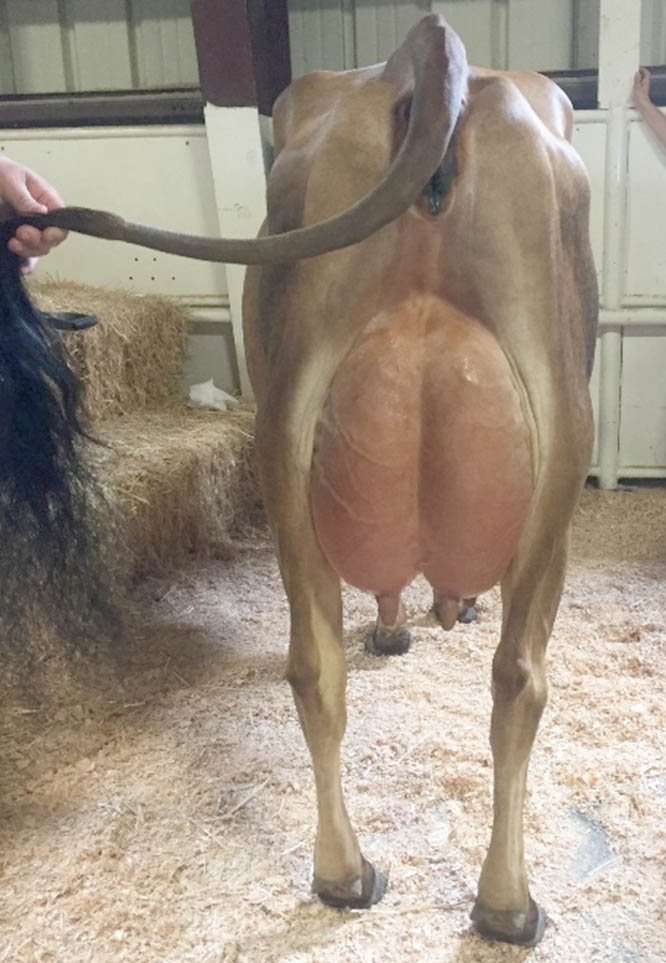 7GU468 LADYS MAN – For our Guernsey enthusiasts, I have seen at least one LADYS MAN daughter that is flat out awesome! While not the biggest two-year-old, she has all the right parts to become a tremendous cow. My opinion was verified when she won Intermediate and Grand Champion honors at the Washington State Fair earlier this month. Stay tuned for her professional photos soon!

7GU467 ERNIE – Here’s another exciting Guernsey bull! Several of his local daughters have been photographed with one even being featured in the August 2019 Sire Directory! (Pictured below) Several more of his daughters from All West Territory are pictured on his bull page, as well. 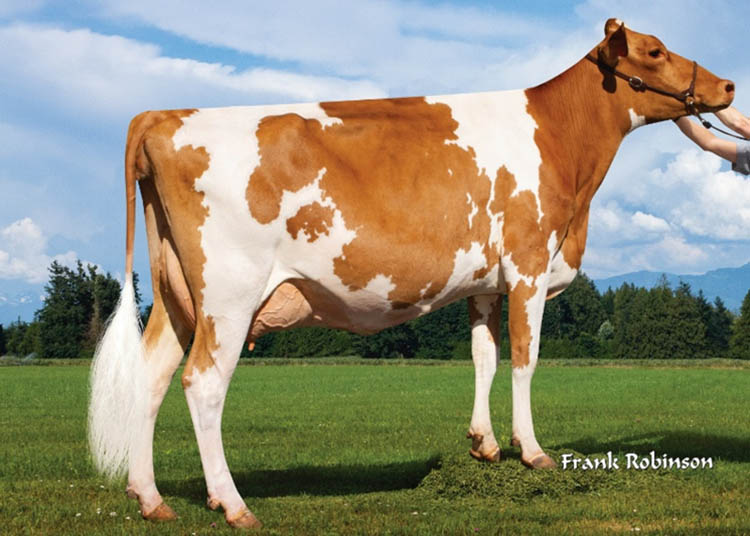 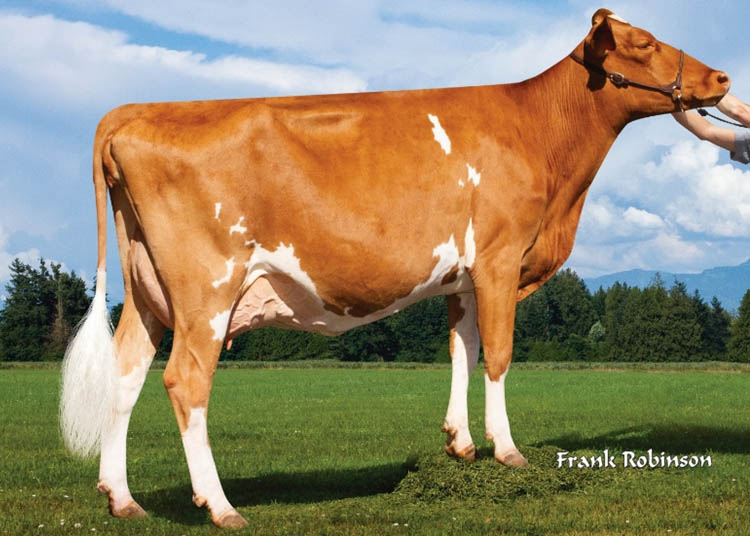 Thank you to Kelby Stadt for sharing what’s in his tank, as well as his great insight about the impressive daughters he has been seeing in his customer’s herds. Contact us today if you are interested in the bulls in Kelby’s tank or any of our quality sire lineups!