A highly synchronous period of estrus expression allows for effective use of technologies such as A.I. and ET. Many short-term protocols for control of the bovine estrous cycle rely upon an initial administration of exogenous gonadotropin-releasing hormone (GnRH). However, when evaluated among cows with no prior synchronization of the estrous cycle, administration of GnRH at a random stage of the estrous cycle is not successful for inducing ovulation in a substantial portion of cows. A portion are simply in a stage of the estrous cycle in which the developing follicle does not yet have the capacity to respond to GnRH. This presents a challenge for effective control of the estrous cycle, as this variation among cows can result in a reduced percentage of cows expressing estrus. Cows that fail to express estrus prior to fixed-time A.I. have reduced pregnancy rates and are more likely to undergo embryonic loss compared to cows that express estrus. Cows that fail to express estrus are also poorer candidates to receive embryo transfer or to receive technologies like sex-sorted semen for fixed-time A.I. Therefore, it is critical to generate a fertile and highly synchronous period of estrus expression among the largest possible number of cows receiving estrus synchronization. 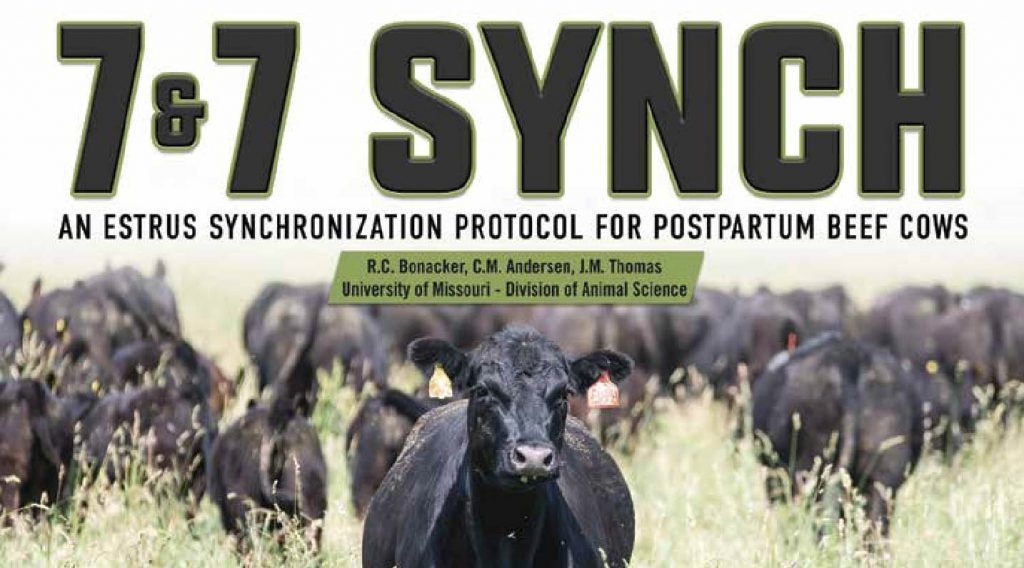 Researchers at the University of Missouri have extensively evaluated a new estrus synchronization protocol, 7 & 7 Synch, as an improved method to synchronize estrus among postpartum beef cows. Research efforts have included an initial data-intensive pilot project, an extensive field trial evaluating this approach for synchronization among recipients prior to embryo transfer, and an additional extensive field trial evaluating 7 & 7 Synch with fixed-timed A.I. using both conventional and sex-sorted semen. Results indicate a significant increase in the portion of cows expressing estrus following synchronization and in the pregnancy rates achieved.

The protocol (Figure 1) begins on Day 0 with prostaglandin F2(PG) administered at the time of CIDR® insertion. On Day 7, GnRH is administered, and the CIDR® remains in place at this time.

Prior to any large field trials, researchers evaluated the effect of treatments in advance of GnRH administered at the start of estrus synchronization (Bonacker et al., 2020a). Administration of PG followed by treatment with an CIDR® was hypothesized to result in increased follicle size at GnRH, thereby enhancing response to GnRH and overall response to estrus synchronization. With the 7-day CO-Synch + CIDR® protocol as a reference, four additional treatments were tested. Treatment with PG and CIDR® in advance of GnRH resulted in significant increases in the diameter of the largest ovarian follicle and in serum concentration of estradiol at GnRH administration. Cows that received PG and CIDR® treatment prior to GnRH also tended to be more likely to have a single CL at CIDR® removal and PG, and to express estrus prior to fixed time A.I.

In collaboration with Cross Country Genetics (Westmoreland, KS), a large-scale field trial was designed to evaluate the effectiveness of 7 & 7 Synch on producer operations. 7 & 7 Synch was compared to the 7-day CO-Synch + CIDR® protocol to synchronize estrus and ovulation among recipients prior to embryo transfer. The trial took place across thirteen locations in Missouri and Kansas and included over 1,300 postpartum beef cows of varying age, postpartum interval, and body condition scores. The proportion of cows expressing estrus and presenting with palpable CL at embryo transfer was significantly greater among cows following treatment with the 7 & 7 Synch protocol (Table 1).

An additional large-scale field trial was conducted to compare the 7 & 7 Synch and the 7-day CO-Synch + CIDR® protocols for synchronization of estrus among postpartum beef cows prior to fixed-time A.I. To assess field fertility of both sex-sorted and conventional semen, half of the cows assigned to each protocol received sex-sorted semen (SexedULTRA 4M®) and half received conventional semen. The trial took place in eleven locations across Missouri and South Dakota and included over 1,500 postpartum beef cows of varying ages, postpartum intervals, and body condition scores. 7 & 7 Synch significantly increased the percentage of cows expressing estrus prior to fixed-time A.I. (Table 2). Additionally, 7 & 7 Synch resulted in increased pregnancy rates to fixed-time A.I. using conventional or sex-sorted semen (Table 3). 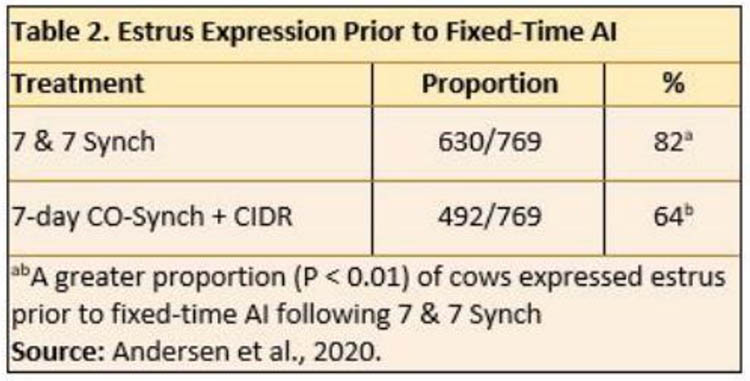 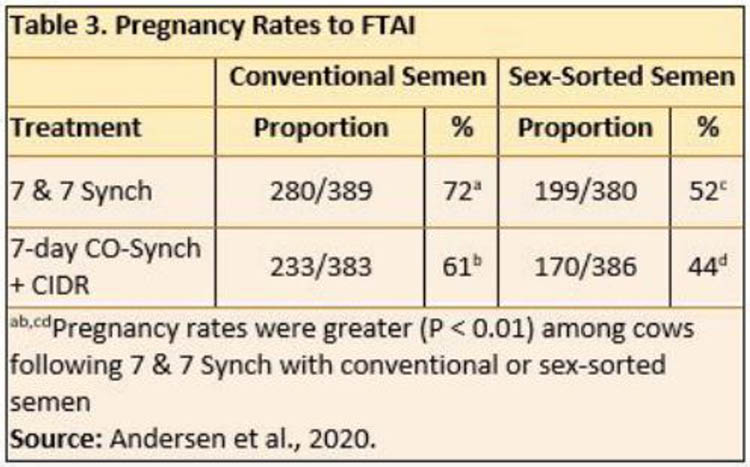 7 & 7 Synch appears to provide a promising opportunity to enhance control of the estrous cycle in postpartum cows. However, use of this protocol in virgin beef heifers has not been evaluated in comparison to other commonly used protocols. When compared among cows to the commonly used 7-day CO-Synch + CIDR® protocol, research noted significant improvements in pregnancy rates and in the number of cows expressing estrus. While 7 & 7 Synch does require one additional handling of animals and one additional dose of PG, the value of the increased pregnancy rates obtained is expected to outweigh these costs in most cases.
At the time of this writing, 7 & 7 Synch has not been added to the protocol sheets published annually by the Beef Reproduction Task Force.