We cannot believe our summer with 2021 All West Summer Intern Mitchell Wesen came to an end on Friday, August 27, 2021! In ten short weeks, Mitchell covered a large portion of All West Territory and was able to travel to more destinations than any of our interns before him, despite the current pandemic restrictions.

We thank all of our dedicated team members and member-owners who made this summer a very memorable, educational, and fun experience for Mitchell. Likewise, we thank Mitchell for his flexibility, willingness to learn, and always positive attitude while working with our team. We will certainly miss his big smile and curiosity, but are sure we will be seeing him again, doing big things in the dairy industry upon his graduation from Cal Poly.

Read on to learn more about the second half of Mitchell’s internship experience and watch the video below to hear from him directly! 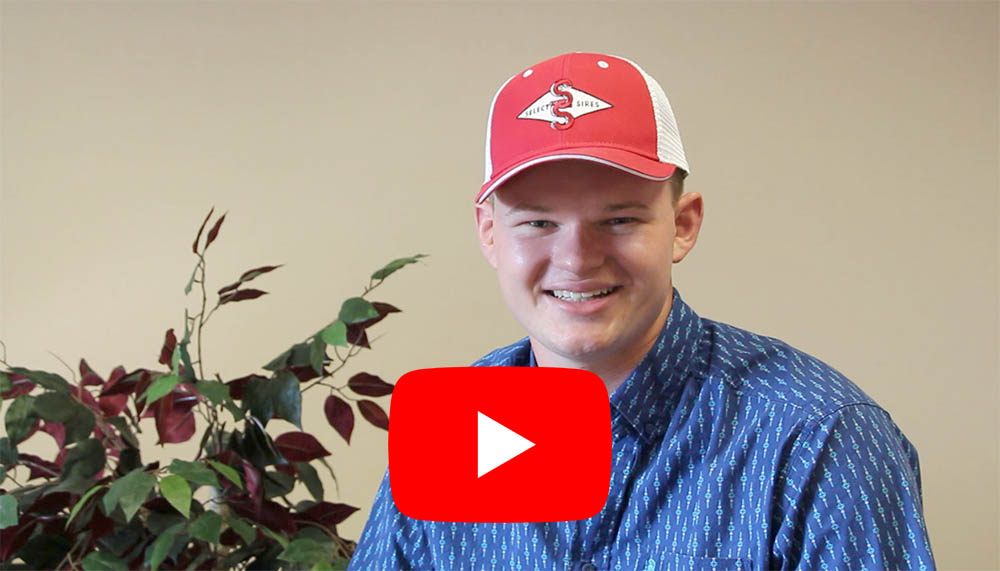 To start off Week 6 of my All West/Select Sires summer internship, I flew down to the Central Valley of California. On my first day there, I worked in the Turlock office, meeting everyone who works behind the scenes to keep the southern half of All West Territory operating smoothly. I spent the majority of my day in the warehouse with Rocky Moitoso learning about the complex inventory system and how they manage and keep track of such a large supply of semen. I also spent time filling incoming orders and preparing them to get picked up in the office or delivered to the crew in Tulare.

Later on in Week 6, I took a quick trip to the Petaluma area and spent the day with Carly Olufs, a former All West intern who now has her own sales route. We visited some dairy farms in Point Reyes, filling nitrogen tanks, restocking supplies and selling semen. It was very interesting to learn about the history of dairy farming in this area and how they have been able to cope with such strict environmental rules and regulations. I also enjoyed the fact that many of the dairy farms in this area are organic, as I come from my family’s organic dairy in Washington. I was able to tour some of the farms and visit with the owners, allowing me to learn a few tips and tricks that they have found helpful while being organic. The most interesting organic practice I saw was a farmer who cracked an egg into each bottle of milk that was fed to the calves. Due to the limited amount of affordable organic calf supplements, this was a very effective way to give the calf an added boost to her immune system. Eggs are also a very common ingredient in first day calf pastes or gels such as Paste Plus and I think it’s very fascinating to see how different facets of the animal agriculture community can benefit one another.

To start off Week 7, I headed a little further south in the Central Valley and I worked in the Hanford and Tulare areas. I was able to spend some more time completing linear evaluations of cows with Rodney Paulo and Carson Hillberg. Carson and I visited Airosa Dairy to evaluate their fresh cows and it was a pleasure to be able to walk around and work with a very well-rounded, uniform group of cattle. I also spent some time with Cris Hatch both breeding cattle and working on OGPs (Optimal Genetic Pathways) for several herds. While I have been breeding cattle for a while now, Cris really helped me focus on operating efficiently while working through a group. We talked a lot about minimizing steps, knowing when we need to clean out a cow versus when we don’t, and making sure we were doing everything with a purpose. This was very beneficial as it made me start thinking about everything I was doing while heat detecting and breeding and how I could move a little more efficiently.

For Week 8, I was back in the Turlock area for the August Sire Summary Evaluations! I started out the week with Jake Van Vliet where we sold semen at some of the accounts he manages in the Hilmar area. Jake and I were also able to meet up with Jonathan Merriam, President of Jersey Association and longtime friend of my father’s from back in their Cal Poly days. It was very nice being able to catch up with Jonathan and learn about some of his dairy industry experiences and all he has been able to do and learn in the dairy genetics industry. Later on in the week, as more proof information was released, I was back in the office looking over and editing the new price list with Angie Kennedy. After a price list meeting was held, Angie and I went over the long list of bulls and removed the ones that were no longer worthy of being promoted on this version of the price list. We also spent several hours proofreading the price list and making sure everything was perfect before it was finalized and thousands of them were printed. This concluded my time in California and I flew back home to Washington for the weekend.

In Week 9, I was off to Idaho, the fourth and final state that I visited throughout this internship. This trip was for a beef project along the Snake River, so I met up with a couple beef sales representatives and Morgan Johnsurd, the All West Beef Program Manager. We headed up to the OX Ranch and stayed at Seven Devils Lodge. This was my first experience on a beef project and it was very interesting to see how they operate around much more timid cattle with a larger flight zone. We hauled a mobile breeding barn to the ranch that had an area for thawing semen as well as two chutes allowing for two cows to be bred at the same time. The efficiency of this barn allowed us to breed the 300 virgin heifers in about three hours. We also grouped the heifers based off of when they came into heat and used multiple bulls based off of the color of their heat patch, which was specifically placed on the heifers when CIDRs were pulled.

For my final week, I was back home in the Burlington area spending the majority of my time riding around with technicians. I have now been on every breeding route in northwest Washington and have been able to learn about a lot of the different breeding strategies in this area. I was also able to spend a day with Mackenzie Yerian and Kelby Stadt in Whatcom County looking through a couple herds of cows and picturing some of the top daughters. Mackenzie and I also met up with several All West technicians to ask them a few questions about themselves and get footage of them in action!

This summer has flown by and it’s hard to believe that my ten-week summer internship has come to an end. I remember showing up to my first day in the office like it was yesterday! I am very thankful for all of the experiences I have been able to have this summer and I would specifically like to thank Randy, Rory, Mackenzie, and their families for allowing me to stay with them throughout my travels. I would also like to thank Karl, and Mackenzie again, for planning my All West adventures.

I’m also very appreciative of everyone in the All West Family who let me tag along with them this summer, as well as the farmers who ultimately own All West and allow this internship to continue year after year. Thank you!