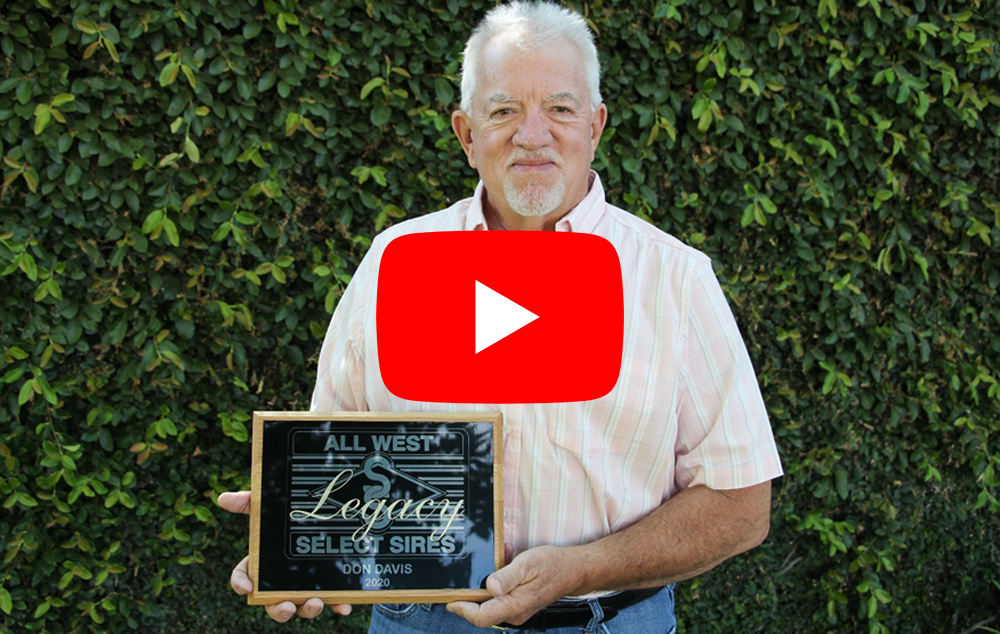 Hilmar, California is home to many legendary cows and cheeses, but only one legendary All West/Select Sires Sales Representative. As we wished Don Davis farewell, he sat comfortably on the lawn of Hilmar Cheese Company, admiring his All West Legacy plaque and reflecting on nearly 50 years in the A.I. industry!

Don’s career began where most All West employees do, on a west coast dairy farm. However, Don’s passion for cows developed long before he even knew much about artificial insemination as a young dairy employee. When the farm offered to send Don to A.I. school, he took full advantage of the opportunity, with one agreement: he would return to the farm to breed their cows. This was the start of Don’s thirteen-year career as a professional A.I. technician in Northern California and Southern Idaho. 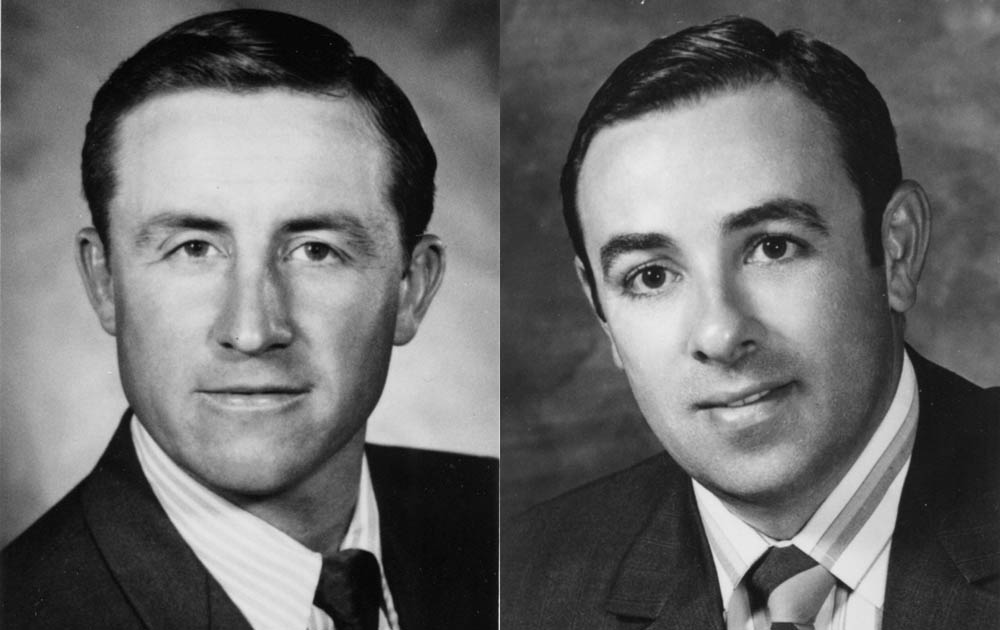 As Don’s parents were aging in California, he decided to return to his home state to be closer to them when needed. This move encouraged Don to reach out to Superior Sires owners, Tom Olson and Lloyd Vierra. Superior Sires was a California distributor of Select Sires semen at the time and later became known as All West/Select Sires.

Don’s call to Tom resulted in the opportunity to meet with Superior Sires for an interview and he was hired soon after. Tom and Lloyd tasked Don with starting an evaluating and mating program, which is today known as Select Mating Service (SMS). Don recalls it being quite a task! There were no herds using the mating program at that time and his territory stretched from Canada to Mexico, and from the Pacific Ocean to Nevada, requiring him to spend much of his time on the road.

After six years of dedication to these duties, Tom called Don with the tragic news that sales representative Duane Wilson had been in an accident and was in the hospital. Tom needed Don to report to Ferndale, California to run Duane’s route while he recovered. Don quickly reported for duty, with full intention that this position would only be temporary until Duane was back on the road. Unfortunately, Duane’s injury was severe enough to keep him from returning to work. With this discovery, Tom offered Don the position in sales and he graciously accepted the responsibility. Don hit the road yet again and quickly became a member of the All West/Select Sires “Million Unit Club” in 2002, making him the 10th person to ever sell over 1 million units of Select Sires semen in the United States. As of May 31, 2020, Don had sold a total of 2,834,245 units in his career at All West.

Don noted that while much has changed in the A.I. industry during his 50-year career, he has seen the most change just in the most recent five years! “Genomics is what revolutionized this industry. There are so many changes now because of genomics – what we do with cattle, how we sell, how we present our bulls and programs, and more. The last five years have been the biggest changes I’ve ever seen and it seems like there’s more change to come.

Big changes are coming for Don personally, as well, as he officially retires on July 1, 2020. “It’s tough,” admitted Don. “It’s very emotional for me. I know it’s time, but it’s still hard to say goodbye to everyone. I love this company and I love the people who I have got to work with. I wish them much success.” 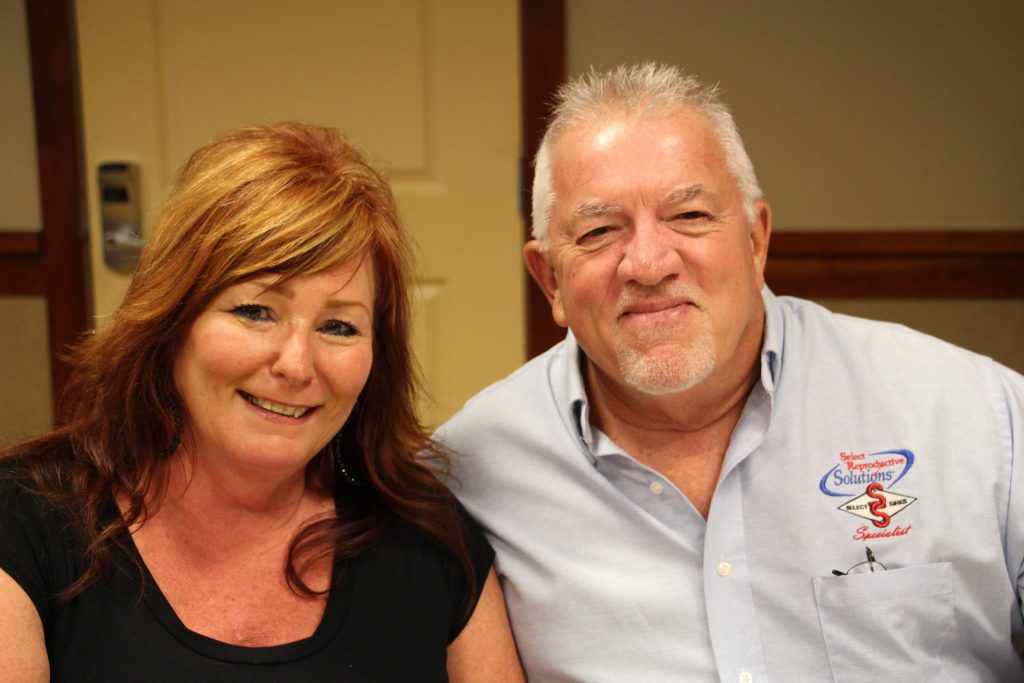 Don and his wife Suzanne have sold their house in Hilmar, California and relocated to Nampa, Idaho where their beautiful new home sits of the sixteenth green of Red Hawk Ridge golf course. Don does not plan to slow down much in retirement, as he will be busy kayaking, off-roading in his Jeep, traveling with his wife, and of course, playing golf daily. Don and Suzanne also look forward to spending much of their new-found time with their over 20 grandchildren and great-grandchildren who keep them constantly entertained.

Don notes there are many things that he will miss about his job, but the fabled “Snake Tour” is at the top of his list. Every other year, Select Sires Inc. hosts a National Sales Conference at the company headquarters in Plain City, Ohio. The managers of All West/Select Sires graciously choose team members to attend and participate. A group of gentlemen who never want the fun to end always continue their trip after the conference on what they call the “Snake Tour”. 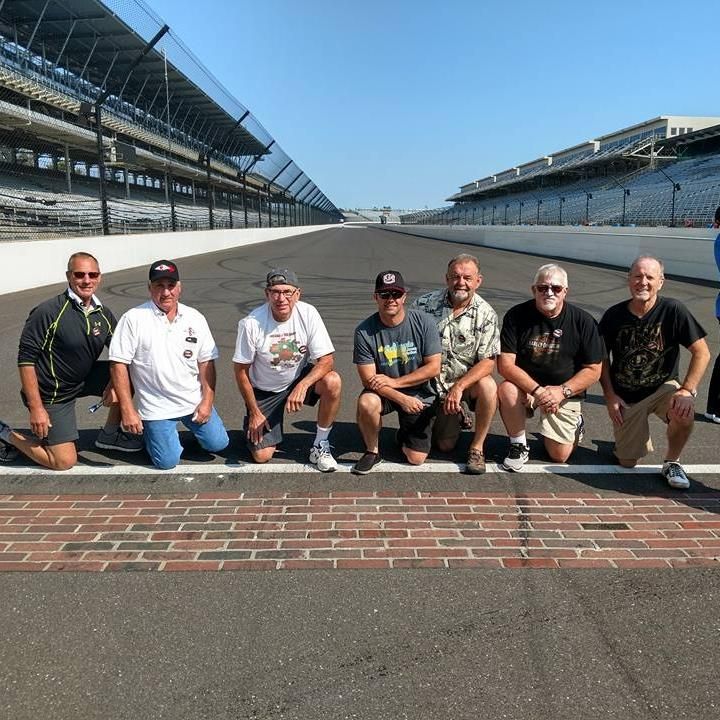 “I really don’t know how that name came about,” said Don. “The guys included in that were Allan Cossentine, Denis Curtin, Marvin Correia, Greg Silva, Larry Nootenboom from Washington, Marlin Beck from Montana, and Albert Streutker from Canada. After the sales conference, we would take off in a van or fly. We would go to different baseball games. We’ve been to numerous stadiums. We went to Louisville Slugger, the Kentucky Derby, visited a horse ranch, and more. There were so many great trips I cannot even name them all! They were probably some of the greatest times I have ever had and I hope this tradition carries on. The comradery was unbelievable. One of the things I am going to miss the most is those times together with those guys. We really had a special bond and still to this day, we’re very close. I am very thankful to our managers through the years for allowing us to continue these trips.”

Even more than the “Snake Tour”, Don is going to miss his customers, who he considers to be friends and even family. “I’ve dealt with these people for well over 30 years,” Don said. “The greatest gift ever was for my clients to trust me to take care of their A.I. needs. There are many, many competitors out there, and some really good ones, and for them to choose to trust me was truly special.” 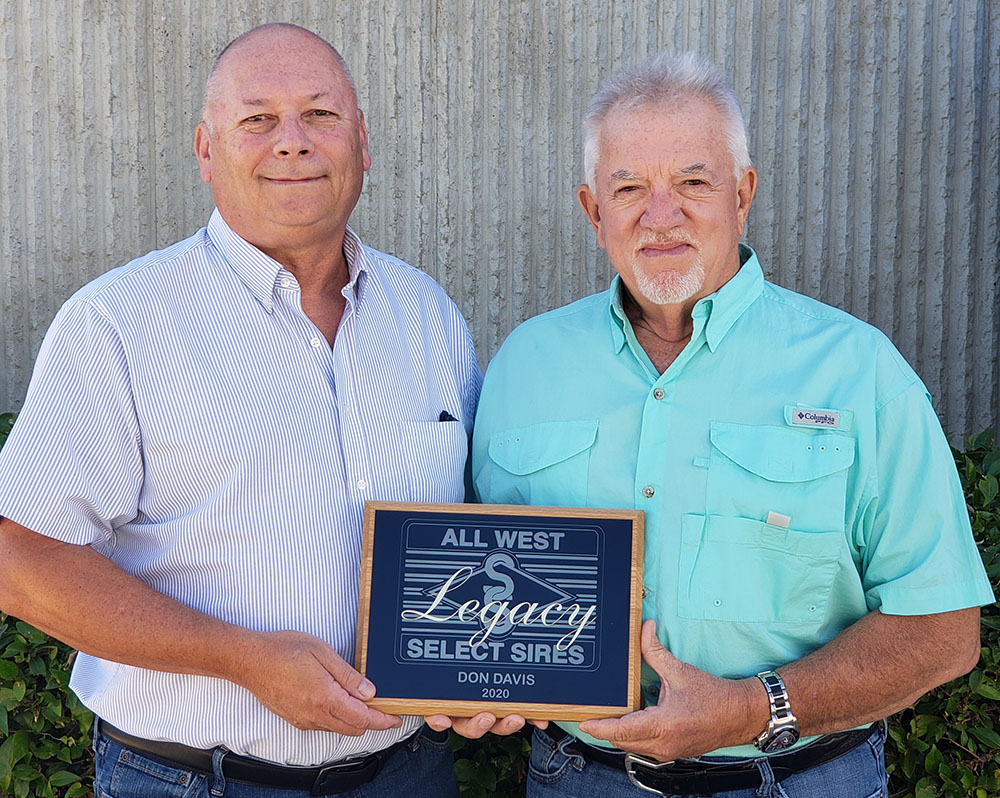 Beyond the obvious appreciation he has for his loyal customers, Don would also like to thank everyone who has been part of his legacy, including all of the All West/Select Sires managers, Dick Chichester, David Thorbahn, the Select Sires Inc. crew in Ohio, Herald Catlin, and Jim Wells. He especially thanks Jim for allowing him to transition in to his retirement so smoothly. “This is tough. Retiring is a hard thing for me to do. I know it’s time. I need to pass this on. The younger people have way more energy than I do and it’s time for the younger generation to run with it. The biggest thank you would be to Jim Wells for allowing me to go out the way I am going,” said Don.

Don is leaving his customers in good hands as the next generation steps in to carry on his legacy. His advice to them is simple. “Advice I have given and will give again is a very simple phrase that Tom Olson told me when I first started working for Superior Sires: ‘Take care of your customers.’ Work with them and make sure they’re happy. They’ll make sure you’re happy.”

With fifty years ahead of them to achieve Don’s lengthy career, the next generation may be wondering, why (and how) did he continue to get up every day to get the job done? “Because I love the job,” Don stated. “I love being around and working with people. As we all know, people can be challenging, but I enjoyed the challenge. Also, my wife pushing me out of bed every day helped. I want to give my lovely bride all of the credit in the world for standing behind me.”

As Don moves out of All West Territory and on to retirement, he reminds us that this is not goodbye.

“I told one customer goodbye and thank you and he said to me, ‘It’s not goodbye. Goodbye is too final.’ I looked at him kind of funny and then realized he was right. So, I don’t say goodbye anymore. I say thank you. I wish everybody well and I hope the years I have left are fun ones!”

Thank you, Don, for serving All West customers for over 35 years, selling nearly 3 million units of Select Sires semen, and leaving your legacy here with the All West Family. We wish you and Suzanne health and happiness in your new Idaho adventures!