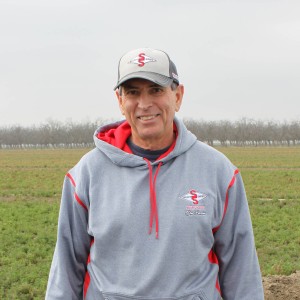 Allan Cossentine of Hanford has a reputation that might be considered the gold standard for performance as sales representatives go. A loyal employee of All West/Select Sires for 33 years, Cossentine has surpassed the 3-million dose mark in semen sales and is now one of only three individuals in America to have ever reached this milestone.

Jim Wells, general manager for All West/Select Sires says, “Allan Cossentine has always gone to great lengths to provide his customers with exceptional service to go along with excellent guidance on genetic selection. He has a unique willingness to serve, a servant attitude that puts his customer first in everything he does.”

Bill Genasci, regional manager, said “for more than 30 years, Allan has been the face of Select Sires to his many customers in the South Valley. Reaching the milestone of 3 million units is a testament to how well he has been received in his area. Forming lasting relationships with both his customers and the technicians he works with has taken him to a level that few will ever reach.”
He started selling semen in 1978 with Eastern AI in Fresno, Kern, and Kings counties. But his journey with All West/Select Sires began in February 1980, working with Tom Olson and Lloyd Vierra, covering a territory from Bakersfield to Turlock, and along the coast from Salinas to Santa Maria.

Cossentine has served dairy producers in Fresno, Turlock, Bakersfield and the Central Coast area and was sales manager for the company for a few years on the Coast and in Kern County.

“They treat their employees like family. It’s a company culture, which has been maintained by the present leadership of Bill Genasci and Jim Wells. Their doors were always open,” Cossentine said. “There are not too many places I could have worked for so many years and been treated so well.”

The company literally runs in his blood. He is passionate about what he does in the industry and is so connected with All West that he has the company logo tattooed on his arm. He and his wife, Suzi, raised some of the first Pinzgauer cattle in California in the mid-1970s on their small 10-acre ranch at the edge of Stockton. The cattle are a rare breed with origins in the Pinzgau region of Austria.

Today, while Pinzgauer cattle are on the endangered list, Cossentine has thrived in his more than 3 decades with All West/Select Sires. “I believe what success I’ve had is the result of being blessed to work for this company for the last 33 years, and working with producers in the concentrated dairy area of Central California,” Cossentine said.

Many good memories flashed through his mind as he looked back and talked about his career. He said he considered his customers to be friends, and always put them first, making himself available, whenever or wherever they needed him.

“I’ve always looked at myself as more of a caretaker than a salesman. Years ago I heard someone describe a good salesman as someone who could sell somebody something they don’t want or need. I never wanted to be that guy,” Cossentine confided.

“So to me, this job was all about working in a wonderful industry with great people that I really have a personal interest in helping get their cows bred and pregnant with the best genetics in the world.” Cossentine said he picks the bulls in their Select

Mating Service for his customers and then he works extensively with Greg Silva, who handles most of the mating on the herds Cossentine serves.

“One thing that I believe has made me different from some of the other sales people is when I first started in this business I was talking to a dairyman and I made it clear I was interested in a long-term relationship. I hoped to be selling him semen when my children were in college.” And for the most part, that’s the way life has been for Cossentine. “As it turned out, I’m still selling semen and I now have grandchildren who are close to starting college.”

“I could single out some of my long-time customers that helped me reach this milestone, but I really need to say thanks to ALL my customers over the years. I’ve enjoyed my friendships with my clients and couldn’t have accomplished what I’ve done without every one of them,” Cossentine declared. “Large dairies or small ones, I’ve tried to treat each customer with the same integrity and respect.

“I would be remiss if I didn’t thank Lloyd Vierra and Tom Olson for giving me a job 33 years ago. They put together a group of co-workers who not only became my dearest friends, but like family. With Lloyd and Tom at the head of that family, it was impossible to fail.”

Cossentine’s work ethic also carried over into his private life. So, whether it was youth sports with his kids, activities at First Baptist Church, charity work, or the dairy industry, Cossentine has always been heavily involved in his community –– with an extra strong commitment to be a positive influence in the lives of young people.

Over the years, he has coached Little League and Babe Ruth baseball, and soccer.

“While I loved baseball, I really didn’t know much about soccer, but we had a great time and I guess I offered a lot of encouragement as much as actual coaching,” he said.
He and Suzi have four children and six grandchildren. They celebrated 37 years of marriage in February 2013. “I would like to also thank my wonderful wife and partner for all the support and all those nights she was alone caring for our children while I was on the road.”