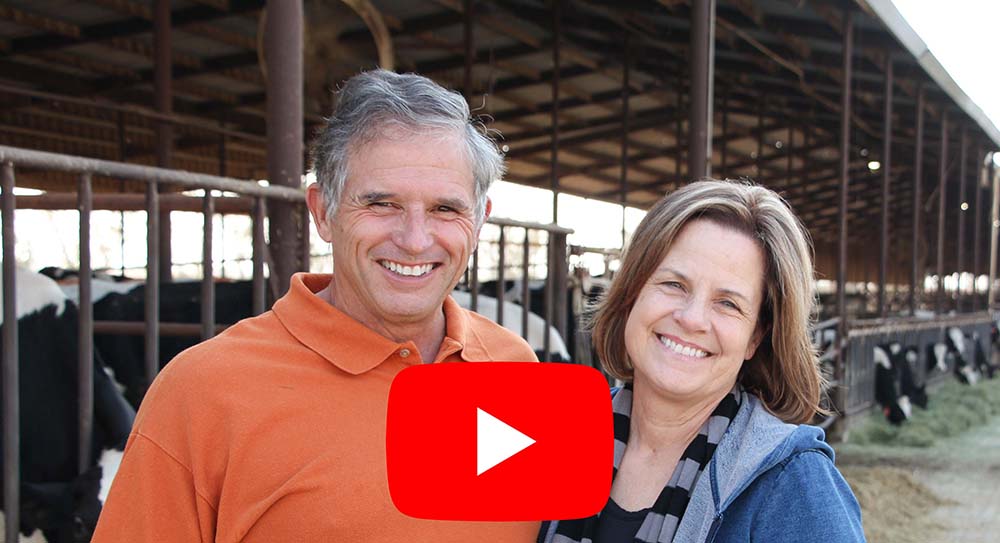 “We started dairying in 1980 on our own. We bought some cows and we had some purebreds. My dad had retired and we rented the home place for just short of two years. Then, we built the facility that we’re on right now. We built it for 240 cows. We now milk 338 cows. Our herd is probably 95 to 98 percent Select Sires bred.”

“We showed cows when our kids were growing us here. We’ve participated at the state show and county level. We’ve had All-American nominations and Junior All-Americans. We’ve been Premier Breeder and Premier Exhibitor at several of the shows. We classify every year. Before genomics, we used to sell a lot of bulls. We’ve had several bulls go to Select Sires. We had Den-K Kirk Boy early on who was ranked number 15. Then we had Den-K Alta Greatest that was number 4 in the nation at his time. We’ve sold several cows in the process and the purebreds have made us some money.”

Dennis: “I’m a third-generation dairyman myself and the best part was getting to raise our kids here on the dairy. They had chores in the morning and chores in the afternoon. Family vacations became going to cattle shows. We traveled all over California and Washington, and even Wisconsin. That’s what we did as a family. It kept us together as a family and gave us something that we all had an interest in doing, which made it really enjoyable.

Now at 64-years-old, I need something to get up in the morning to do. I still love going out there and seeing those cows and I still get excited when the right calf is born out of the right cow or when we have a great classification like we recently did. It gives me a little more incentive to go out and keep enjoying what I love doing.”

Kirsten: “The stuff that makes dairy farming tough probably sticks out in our mind more these days, but we’ve always loved the cows and the life of being out here on the dairy. We were very fortunate to get to raise our children on the farm where they gained the great work ethic they have today as adults. However, the environmentalists, animal rights activists, and milk pricing in the state of California make it really hard to be dairy producers here.”

“I was an All West member back when Lloyd Vierra and Tom Olson were selling semen in this area. Robert L. Silva was the director for All West in our area for years and he asked me if I’d want to run for delegate and I said ‘Sure!’. So, I ran for delegate that year and got elected to the board. Three years later, Robert L. called me and he said, ‘Do I have to go out and campaign? Are you going to run against me?’ And I said, ‘No. As long as you want to be a director, I can learn from watching you. I’ll just wait my turn.’ Well, it was actually thirty years later when Robert L. Silva decided that it was my turn. So, he stepped aside, I became a director, and now it’s thirty-two or thirty-three years later and I became the President of All West/Select Sires in February 2020. It’s just been terrific. I wouldn’t look any place else to go anywhere for any reason at all.”

“First of all, the the quality of what you can buy is exceptional. Select Sires is the number one bull stud and the leader in the industry. It’s not a secret. It’s the largest and only bull stud cooperative left in the United States. Doing business with Select Sires is not a hard choice to make. If you want to be the best, you need to work with number one!

Also, the people of Select Sires are also terrific. I got to know a lot of people when I was a delegate. Now that I am a director and have been on the executive committee for a couple of years, I’ve traveled back to Select Sires Inc. and gotten to meet the management team over there. It’s just a really good feeling. It’s all about the people and that is the truth.

We try our best to make everybody happy because if you’re happy with what you’re doing, you’ll never work a day in your life. That’s probably why we have so many people who retire after twenty-five, thirty, and forty years. It’s because of the way they’re treated.

Every newsletter and every email that we receive from All West’s CEO Jim Wells reminds us about the people who are working behind the scenes. The ones who get up at three-thirty or four o’clock in the morning to go breed cows or to go help somebody that needed a hand. Those are the people that really make the operation work. Those people are always appreciated. We cannot tell them enough how important they are to the cooperative. We have a great group of people working for us at All West.”

Dennis: “In general, I appreciate how our directors and delegates know how to mix fun and business to strive towards a common goal. Getting to know my fellow dairy farmers throughout the west coast has been the best part. Not only do we learn about each other’s operations as dairy producers, but also about each other’s families and hobbies as friends. We may be from different areas, but we’ve all been raised in this lifestyle and we all love what we do as dairy farmers.”

Kirsten: “Not being able to attend meetings in person due to COVID-19 lockdowns, although it has been nice to stay home more, has made me miss the people we serve with. We have continued to meet through video conferences on the computer, but it’s just not the same. Hopefully we’ll be back to seeing our All West friends again soon… and eating really good food!”