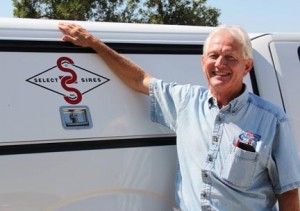 What else does a husband of 34 years, a father of four grown children, and a grandfather of three beautiful girls have to accomplish?  Just one more thing…hitting the million-unit mark!

Ken Rowley accomplished that goal this spring, just under 26 years from the time he purchased his first unit of semen from All-West Select Sires.  The ordered totaled $815.00 and included some large quantities of 7H1005 (Leprechaun Sioux) , 7H1295 (Applenotch Instep) and 7H2897 (Volkert Comanche).  Hired by Tom & Lloyd Vierra in those early days, Ken quickly expanded his business and the million unit march began.

Like many on the All West/Select Sires team, Ken grew up on a dairy and was very involved with his dad until the age of 20.  “Our dairy was in Visalia and by the time I was 20 years old, I thought I knew all there was to know about work and choosing a career.  I told my dad as much, even saying that he was crazy for working so hard at this dairy farming thing!”  Ken joked.  He learned pretty quickly that the grass isn’t always greener, and had to work three jobs just to make ends meet.

Ken said a local dairyman called him on several occasions wanting him to come out and talk about a potential job at the dairy, and after some time had passed, Ken did just that.  “He offered me a job working Monday through Friday from 8am to 5pm, running a 2000-cow dairy.  That didn’t sound like a bad deal to me, so I accepted the job and worked there for eight years.  It really got me back into the dairy farming world and I realized it was actually a pretty good way to make a living!”  Working five days a week quickly morphed into six and seven days a week, especially when Ken was put in charge of the fresh pen and hospital group.

Ken left there and went to work at Veemans Dairy (ie the parents of well-known Mandy Veeman Nunes of Scientific Holsteins in Wisconsin).  There he dialed up his knowledge and interest in pedigrees and focused more on breeding.  Local Select Sires representative Dutch Aldrich had been working for over 30 years in the A.I. business and took Ken under his wing as he noticed his developing interest.  “Dutch helped me learn what I was supposed to do when it came to refining my breeding skills.  I’d even go to the slaughter house and get reproductive tracts to practice on during those days.”

The Veemans eventually moved and Ken was faced with another fork in the road.  He got married to his wife Kathy in 1979 and they bought their own dairy just a few years later in 1982.  They milked 140 cows until the first round of buy-outs came through and they sold the herd.

From that point on, Ken knew his interest in breeding combined with his practical experience of working on several types of dairies would be a good fit for a starting his own technician/sales service.  VanBeek Dairy was his very first customer, and they are still customers to this day!  “They told me I could work at breeding cows there and build my route, which is exactly what I did.  It took me three years to add a second dairy to my technician route, but from there it took off!  I was gone from the house every day from 4am to 7pm.”  He spent more time learning bull pedigrees from people such as Dick Ball and Greg Silva.

Ken steadily increased his business, breeding about 100 cows every day, and the first 500,000 units of semen he purchased ended up being straws he bred with himself.  Today, his 25 tanks serve his own route and five other technicians.  He generally carries 15-18 bulls in the tanks at any given time, and stays true to the sires he strongly believes in.  “I don’t change up my bull inventories every time proofs change,” he stated.  “I do keep a mix of proven sires and genomic young sires because I need to keep the types of bulls I carry in balance, as well as keep my blend price reasonable.  I try to stick to bulls with good udders, feet & legs and test (high components).  Lately I’ve been using quite a bit of 7HO9754 DAYTON, 7H9222 SHOT and 7HO9900 ABRAM, all of which are plus on components, and plus on all their major type composites.”

Ken noted that in the 26 years he’s been at this, he’s always only carried Select Sires.  “I’ve never bought from anyone else.  From the time Lloyd called (and he was with Superior Sires at the time) through today’s All West team, Select Sires has always been good to me!”

So in 26 years, what are some of Ken’s best lessons learned?  He’s quick to note a few things.  His family is very important to him and he enjoys watching his children and grandchildren grow and succeed.  “It’s really a blessing.”  He also said that the A.I. business has been good and you can definitely learn something new every day if you keep listening.  Finally, he points out the lesson of “Taking your time.  Get good at heat detection.  Practice.  Keep visiting herds.  Get confident in your abilities and the products you carry.  I had two herd that were both bull-bred and they switched to A.I. with me.  I’ve already seen an improvement in herd and it was a pretty fast turn-around.  They trusted me with their business after they’ve seen me work through the years.”

Husband, father, grandfather, technician, business manager and sales representative.  Ken Rowley’s “million unit” status comes from a lifelong pursuit of hard work, responsibility and putting other’s interests ahead of his own.  Twenty-six years and counting for the southern California sales representative who truly believes that “Your Success is HIS passion!”
A copy of the very first invoice Ken Rowley purchased from All-West Select Sires (previously doing business as Superior Sires).  The invoice is dated June 1, 1987 and includes bulls such as INSTEP, COMANCHE and SIOUX.  Little did the Tulare, CA, man know that this was the first step in a million-unit journey.