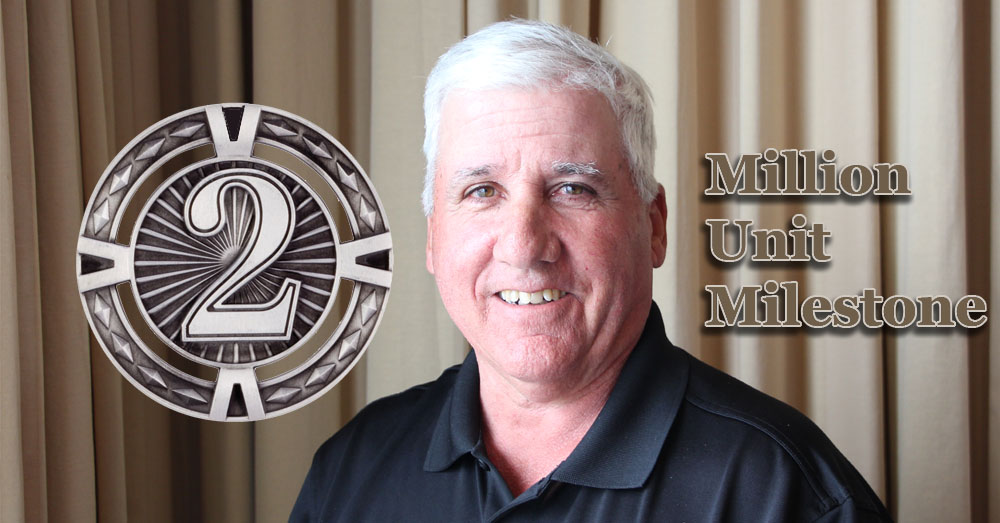 Some say that in order to succeed at being a salesperson, you need to think like your customer. All West Salesman Marvin Correia is unique because he actually was a customer and dairy producer before joining the All West family in 1991. Since then, he has sold over two million units of Select Sires semen, surpassing this milestone last month. As of September 30, 2018, Marvin has sold 2,008,976 units in his career…. and counting!

Marvin gives credit to his older brother, Melvin, for being the first person to teach him about cows. With Melvin being 14 years older and starting his cattle career in high school, younger brother Marvin was introduced to the dairy farming way of life at a very young age. What started as an FFA project for his older brother eventually became a 400-cow dairy with the involvement of Marvin, their other brother, and their father. As time went on, the men separated in business and Marvin began his own dairy. He raised a good herd of registered cattle and even sold some bulls to the A.I. industry. Some of Marvin’s fondest memories were becoming close with other breeders in the industry, including Doug Maddox and Joe Airoso, who offered him a great deal of guidance and friendship along the way.

When times were tough, Marvin exited the industry as a producer in search of a career change. Other dairy producers who were also going out of business were seeking positions are herdsmen on neighboring dairies, but Marvin wanted to do something different. Doug Maddox helped him get a job working for the iconic Dreamstreet herd. “Doug was probably the biggest mentor I’ve ever had. Going from being a full-time dairy farmer to working at Dreamstreet was completely different. I’d go to him often with problems I came across in sales and working with people. I remember him asking me if I liked the job and when I responded that I really did, he said, ‘Well the rest will take care of itself. Stay with it!’ Doug was a great mentor to have in the industry and really helped me a lot,” said Marvin.

Several years later, the Dreamstreet herd was sold and Marvin relied on his expertise and connections to get him another job within the industry. Thankfully, Marvin’s acquaintance with Lloyd Vierra and Select Sires’ dedication to cow families encouraged Marvin to become a lifelong All West family member. “The reason I first started working with Select Sires is because they valued cow families. Through my experiences as a purebred breeder and employee of Dreamstreet, I became really involved with pedigrees. Several other A.I. studs wanted to hire me, but I went with All West because I knew they required any bulls they introduced to their lineup to be backed by strong cow families.”

Marvin was hired by Tom Olson and Lloyd Vierra at Superior Sires, which would later become All West/Select Sires, in February 1991.  “They didn’t really have a position for me at the time, so I agreed to do a little bit of everything,” Marvin admitted. “I worked with SETS, I analyzed, I relief bred, and I did sales when I could. I was just very thankful for the opportunity.”

Although Marvin is now a veteran member of the All West Million Unit Club, he has never considered himself a salesman. “I have played many different roles having lived a lifetime in the dairy industry, as an owner, a manager, and now a salesperson. But I wasn’t sure about sales when I started the position and was very nervous because I’m not much of a talker. The thing that saved me was that a lot of guys in the industry already knew me when I became a salesman. They always respected me for my knowledge of cows and that really helped me in the business. I learned over the years, if you know your product and know your customer, you can be a good salesman regardless of how much you talk.”

It is Marvin’s unique experience working in these many roles that has led to his customers becoming part of his family. “I was a dairyman, so most of my customers knew me as that. I have been very close to a lot of them for many years and some are really good friends, and even family. As a salesman, I think you need to be familiar with your customers to truly know what they want and what they like. Listen to them and they’ll tell you what they need.”

Many of Marvin’s customers now trust him to mate their cows, select their bulls and completely manage the genetics of their herds. “I treat their herds as if they are my own. I’m very particular about what bulls I use for my dairymen. Some of my herds are the top herds in the county. Back when I first started, several of the most well-known California herds today were just average herds working with our competitors. To see where they are now as our customers is pretty rewarding!”

Watching our customer’s success continue isn’t the only exciting change Marvin has seen in his almost 30-year career. He learned how to breed cows in 1970 using glass ampules and recalls the change to straws. He also remembers when his own herd of 400 milking cows was considered average size, compared to today’s over 1,000-cow herd size in California. However, the biggest and most exciting change Marvin has seen has been the now common use of sexed semen and genomics.

As the industry has progressed, Marvin has continued to work beyond selling 2 million units. He admits this was never actually a goal of his, but simply part of the process. “It makes me feel good about myself, and it’s a great accomplishment, but I didn’t set out to reach this goal. I just like doing what I’m doing.”

Like every All West Million Unit Club member, Marvin didn’t reach this goal alone. When he first began working for All West, he had a full-time technician route and was also trying to do sales. Thirteen years ago, his son Chris came in to take over his route in order for Marvin to focus on sales full-time. Marvin praises his son for not only growing his route as he expanded in to new herds, but also for continuously providing great service to his customers.

“The people I work with are awesome! When I came on board, Allan Cossentine, Denis Curtin, and Don Davis were “The Big Three” top salesmen. Thankfully, they were willing to let me be a part of that team. I didn’t feel like part of it for a long time because I thought I had to become a better salesman, but they were always good to me and helped me out. Everybody in our offices and warehouses are great as well. It really takes a whole team to get this job done.”

Marvin especially thanks the team he works closely with every day. “Today, there is more information than ever before on these herds and I’m not much for computers, but All West SMS Evaluator Angie Kennedy gets me the information, I study it, and she is always willing to discuss and answer questions. That has been really good for me and my customers. I have also relied on team member Greg Silva to share what he is seeing in his herds, as we have always viewed cows similarly. All West ProTECH Caleb Garcia has also been a huge help the past few years and All West SRS Specialist Cris Hatch has provided great detail in Select Reproduction Solutions services to my customers as well.”

Marvin simply described working with this team and in this industry as a “family-oriented” experience. “Dick Chichester, former CEO of Select Sires Inc., actually contracted one of my cows many years ago and was always great to talk to. The very first time I visited Select Sires headquarters in Ohio, he had me come to his office to sit down and chat. That’s how family oriented this company is, to this day even! Our federation has gotten much bigger. It’s hard to remain as close, but there is still a great sense of family.”

These days, Marvin has a large family of his own to keep him busy. With ten grandchildren ranging from ages 2 to 16, Marvin and his wife Mary spend all of their free time supporting the kids at their sporting events, taking trips to the coast and enjoying each other’s company in California’s southern valley. “I am thankful to have them close by and be able to see them often. They are my life.”

Marvin’s next goal as an All West “millionaire” is simple. “I’m not looking to reach another milestone. I know cows. I love cows. This career has been great. It’s given me the opportunity to make a very nice living doing something I enjoy. It’s really been fun. I love doing my job, so as long as my health is good, I’ll keep doing it.”