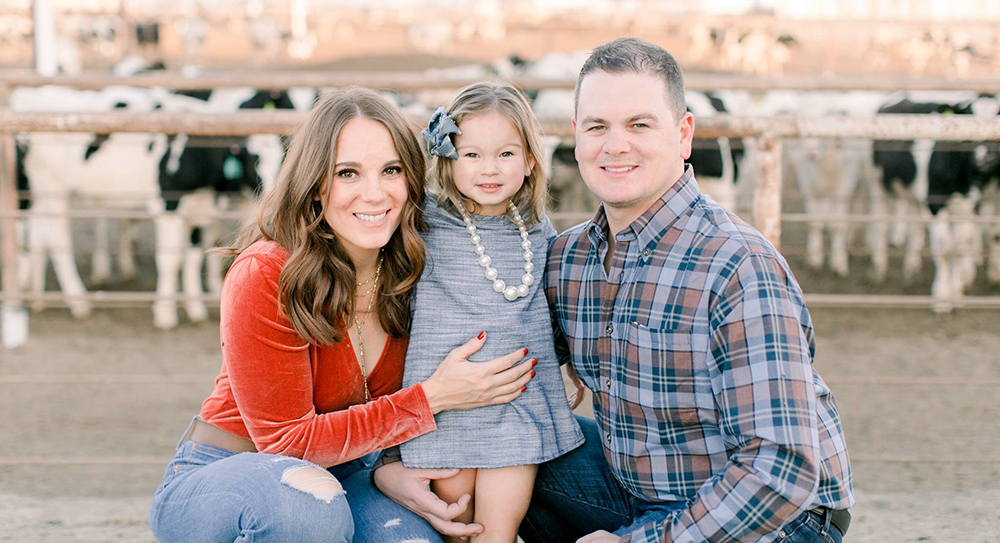 Newly elected District 30 Delegate Mike Santos is the product of a family who has been in the California dairy industry for over 75 years! In 1944, the original farm was started by brothers Manuel Jr. and John, who were partners in the operation. In 1972, Manuel and his son Michael Sr. formed Terra Linda Dairy, or “beautiful land” in Portuguese, next to the original homestead, which was eventually purchased in 2010.

Today, Michael Sr.’s sons, Michael Jr. (Mike) and Craig, are the fourth generation proudly managing Terra Linda Dairy. The dairy is home to 1,300 milking cows, 175 dry cows, and 1,900 replacement females. Mike handles the day-to-day operations of the dairy and runs the genetic program where 95% of the herd is homebred. In 2019, Mike received the AJ Quist Young Breeder of the Year Award from the California Holstein Association. Craig manages the farming operation which includes alfalfa, corn silage, wheat silage and 400 acres of almonds. Michael Sr. oversees both operations.

Terra Linda Dairy has been the highest producing dairy in Tulare County for six straight years and boasts a herd average of 33,722 lbs. energy corrected milk. They have also received numerous Milk Quality Awards from Land O’ Lakes Creamery. Their cows are milked in a double-25 parallel BouMatic parlor three times each day, with the original double-13 herringbone parlor being utilized for hospital cows.

Terra Linda Dairy started using 100% Select Sires genetics in 1990 with All West “Million Unit Club” Sales Representative Marvin Correia as their breeder. “We choose All West because of the quality genetics and services they provide. We feel their sire lineup is second to none!”

“Watching Mike grow up through the years, when he came back to the dairy after college graduation, and working with him on bull selection today has all been enjoyable,” said All West Sales Representative Marvin Correia. “Mike looks at more than just production numbers. He also evaluates type genomic numbers. He puts a lot of time and effort into his genetics and has taken his herd to the next level. Working with the Santos family to improve their herd for many years has been an honor.”

When selecting bulls to use in the herd, Mike looks for a variety of traits, with pedigree being one of the most important aspects of his decision. “We put a lot of emphasis on milk, fat, protein and udder traits. We are big believers in production traits with positive components and want linears strongly shaded to the right side on udder traits. We also emphasis body depth, thurl width and dairy strength. We do like to see positive Daughter Pregnancy Rate (DPR) and Somatic Cell Score (SCS) under three, but it is not a deal breaker.”

Mike is a “big believer in genetics” and is looking forward to serving as a leader in our cooperative to learn new ideas from other dairymen throughout All West Territory and making connections in the industry with other genetic enthusiasts.

Mike married his bride, Leslie, in 2011 and the couple has a four-year-old daughter named Noelle. He may be outnumbered by girls in his household, but he still enjoys Fantasy Football! Mike has been playing high stakes Fantasy Football since 2006 and has had enough success to reach the level of #2 earner of all time in season-long Fantasy Football. When football season is over, the family enjoys spending time together at their beach home on California’s central coast.

Welcome to the team, Santos Family!