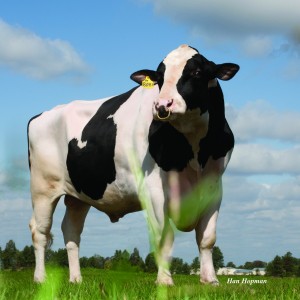 PLANET was bred by David Bishop of Doylestown, Pa., and is a Taboo son of Plushanski Amel Patty-ET (EX-93-3E-EX-MS-GMD-DOM) who passed away shortly before PLANET’s 10th birthday this spring. In January 2008, when he graduated into the active lineup, PLANET was a unique outcross to the Holstein breed that sired big-league production, outstanding udders with moderate stature. Today he is among the breed’s best for Protein (+62) and sires medium-sized cows (-.03 Stature), making PLANET a popular customer satisfaction sire worldwide.

“This is a great accomplishment for a bull that started his career from such humble beginnings,” says Rick VerBeek, Holstein sire analyst. “PLANET was a bull that carried a little-known prefix when he graduated into active service. Today, everyone knows the Ensenada prefix and PLANET has become one of the most dominant genetic sources in the breed, certainly no longer considered different or outcross! One of the most impressive characteristics in PLANET‘s breeding pattern is the influence you can see from his dam. The resemblance the PLANET daughters have to Patty is truly amazing! Extreme milk production and welded on mammary systems will be his legacy.”

Few sires have impacted the Holstein breed like PLANET has and will for generations to come. PLANET has 21 proven sons on the active A.I. list including four that are part of the Select Sires lineup: 7HO10721 De-Su 521 BOOKEM-ET (VG-86) (the highest GTPI proven PLANET son in the industry at +2222), 7HO10606 De-Su OBSERVER-ET (EX-90-GM), 7HO10624 Ralma Planet TEMPO and 7HO10502 Touchdown Planet BACON-ET. With over 360 sons and grandsons designated as active A.I. genomic young sires, nearly 30 percent of the list can trace their lineage back to PLANET. His impact on the breed was recognized this fall when he was included on the updated “Impact Sires of the Holstein Breed” artwork.

“Surpassing one million units in sales speaks to the popularity of PLANET in the marketplace,” explains VerBeek. “His ability to stay healthy and produce over one million units is impressive in its own right, but his most impressive characteristic will be how he positively affected the profitability of dairy producers around the world through his daughters and sons.”