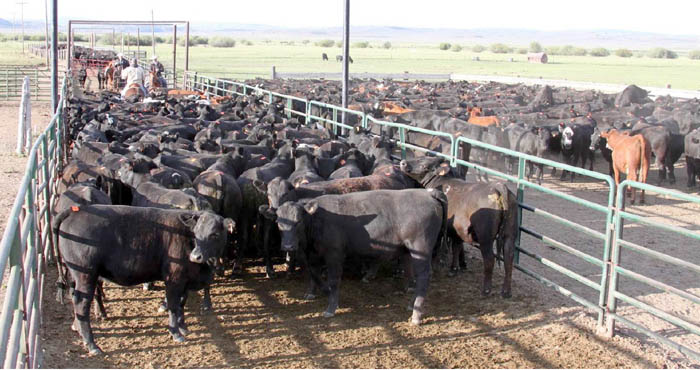 Many producers have different management scenarios to juggle as spring rapidly approaches. We are all calving cows, planning brandings, preparing to move pairs from winter pastures to BLM, Forest permits, and mountain pasture, and going to bull sales. There are so many decisions to be made. We need those bigger calves that walk the distance or weather the long haul to greener pastures and return as big strapping feeders to push down the scales in the fall. How great would it be to have all those calves on the ground early, branded and ready for spring turnout? Here are a few thoughts to consider going forward. If you could have 425 out of 500 calves on the ground in a months’ time, they would sure have a jump start on their journey to greener pastures.

You may want to consider the benefits of synchronization and Artificial insemination. How is this achievable you ask? Synchronization allows every cow an opportunity to conceive on the first day of the breeding season, and the cows that miss will have the chance to settle in 21 or 42 days following synchronization. Wow, three chances to get bred in 42 days?! Yes! And better yet, with a 55% conception rate on first and second service, you only have 75 cows left to get pregnant in the second month of the breeding season.

You ask what about the financial risk? Does it pay? Let’s discuss the logistics of implementing this aggressive program.

If you are starting into an artificial insemination program for the first time with your cows, you need to be ready to commit for the long run. The results will become very evident by year four or five, when your young cows are comprised of the early born heifers resulting from synchronization. And if your goal is to cut your calving season down to 45 days you will have to make tough culling and marketing decisions. There will be many good cows that simply will not make the cut because they calved too late in the previous calving seasons. However, there will be a chance to give some of those cows an opportunity to catch up with the main herd.

A few years down the road when you calve out heifers that were themselves from an AI sire, you will see huge differences in your calf crop.

Cows chosen for the first synchronization should be at least 45 days post calving when you start them on a CIDR synchronization program. This should have given them enough time for their uterus to return to normal size and for them to start cycling. Some very healthy cows will cycle as early as 21 days postpartum while others will still be anestrus (not cycling) at 45 days.

The benefit of still synchronizing those anestrus cows is that you will create an artificial “cycle” for them using the synchronization hormones. By using CIDR’s, you expose the cow’s body to progesterone that she has not experienced since calving and you essentially jump start her, allowing for a more robust follicle to be formed on the subsequent cycle.

In order to gain even higher conception rates with the 7 day Co-Synch + CIDR synchronization for cows you should consider applying the split time AI technique to your program. This involves identifying cows that are in estrus on schedule and giving cows not in estrous additional time to go into heat and be bred accordingly.

With the help of heat detection aids like Estrotect heat detection patches, you can identify standing heat with minimal effort. Estrotect patches are similar to a lottery ticket with a grey coating that is scratched off when other cows mount the cow in heat. The mounting cow’s brisket rubs off the grey revealing a bright, easily distinguished color beneath. A cow is considered in estrus when at least 50% of the sticker is rubbed off. Estrotect stickers are applied when CIDRs are pulled and the Prostaglandin shot is given on day seven. When using the stickers in a split time AI synch, you will separate off all the cows that have an activated sticker at 66 hours post CIDR pull and AI. Cows that do not have an activated sticker at 66 hours are separated till 20-24 hours later when they will be brought in and artificially inseminated. Cows that have not shown estrus at 90 hours also receive a GnRH shot (Cystorelin or Fertagyl). (Bishop, 2016)

Using the split time AI protocol provides a happy medium between entirely fixed timed AI and longer term heat checking. By only giving GnRH to cows that have not shown heat you should have a significant Sorting off activated patches. Photo credit-Darcy Sexson savings on your drug costs. Additionally, you will capture more pregnancies by listening to the cows and breeding off of heats. 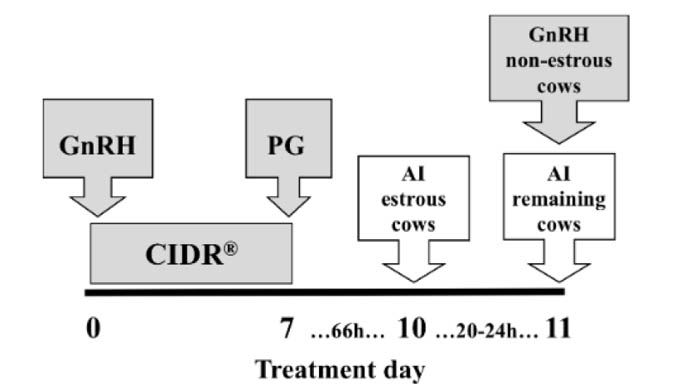 In the study by Dr. Patterson’s group evaluating split time AI at the University of Missouri, they found that on average, 63% of cows showed a heat by 90 hours post PGF shot. Pregnancy rates were increased 7% from 49% pregnancy rate with fixed time AI versus 56% pregnancy rate with split time AI. (Bishop, 2016) While this system requires some extra labor and the cost of the Estrotect patches, the extra cost can be entirely offset by reduced GnRH costs. If you get an increase of 7% in AI pregnancy rates the extra labor is entirely worth it. In the 500 cow example, using the Split time AI you could get an additional 35 calves from AI that will be born in the first two weeks the calving season. Those 275 calves born to AI will have an additional 21 days of gain on their natural service herd mates as well as genetic gain.

Some of the cows will not be able to “accept the challenge” of getting pregnant on the synchronization with AI, but you will have set them up to be successful on their second cycle 21 days later. This will front load the first 30 days of the calving season with the first 275 calves and a second “wave” of 150 calves. Once you have implemented a synchronization program you will need to be aggressive with monitoring pregnancies, culling of open cows or marketing cows with short term pregnancies. Clean-up bulls should be pulled 45 days after artificial insemination.

There may be a significant number of open cows at this time, but they do not fit your calving window so they should be culled or marketed as bred cows. They may be perfectly good cows that will do good in a later calving herd for someone else. (If it is the first year you are using artificial insemination and you are unwilling to cull a lot of cows, you may want to synchronize a second set of your later calving cows.

Set your second group of cows up for breeding 21 days after the first group so they get two chances to be bred. This way, you can accumulate another decent sized group of cows that have passed 45 days post-partum and will have a good chance of becoming pregnant to the AI. This will allow you to ease your herd into a shorter calving season.)

And now for the dollars and pounds of the matter! Compared to a traditional natural service what is the return on investment (ROI)? It comes down to at least 30 pounds and $75.42 ROI per head on steers and 30 pounds and $67.89 ROI on heifers produced in the synchronized mating system.

Tell me more you say? OK, let’s break it down.

Given a 95% pregnancy rate on 500 cows, you will have over 400 calves synchronized to be born in the first 21 days compared to approximately 275 calves in a bull breeding system.

If you are marketing 50,000 pound loads of calves in the fall, you can now market four loads of early born calves, as well, you can keep more than 50 replacements heifers. If the calculated ROI is correct, the 200 steers should return over $15,050 and 200 heifers should return over $13,575 above and beyond traditional natural service. These numbers are generated above and beyond input costs of the AI program. The bonus is the genetic value of the female offspring retained for replacements. 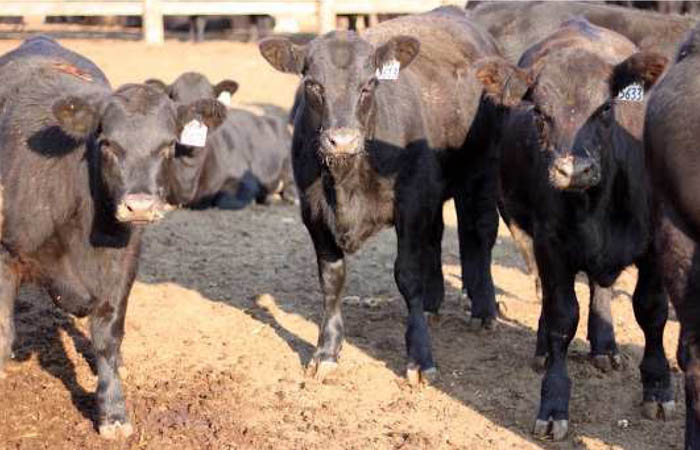 So if those potential herd building genetics are added to the operation, your returns are greater looking forward. The benefits seem to outweigh the extra labor and costs of doing business. If you are looking to get the most pounds out of the early spring grass, those early born calves are your best bet.

Ask your local AI representative how to get started down the road to greener pastures and with more pounds of high quality genetics. To put wheels under those extra pounds of marketable calf start with synchronization and AI.