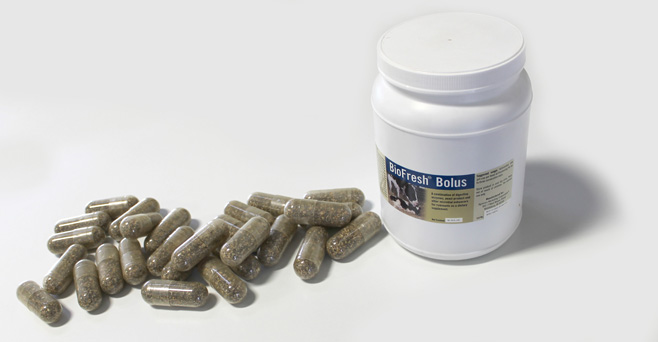 Most dairies today have a protocol to follow for fresh cows. It typically involves a calcium bolus along with a product to aid in gut health and rumination. As Dan Hoying has stated, cows want the same old consistent meal every day. However, getting used to that switch to that same old meal can be a struggle for the gut health of a fresh cow. Dairy producers across the country are utilizing BioFresh Bolus in their fresh cow protocol for other challenges during the lactation because of its wide range of advantages. BioFresh Boluses are formulated to stimulate appetite and improve immune response to keep cows on feed. There are several groups of animals on the dairy that could benefit from using BioFresh Boluses.

Many of the same ingredients are found in our BioCycle, and BioCycle Plus, and BioFresh products. The concentration of these ingredients in BioFresh Boluses is 8 times higher.

BioFresh Bolus is available in both 50-count jars and 400-count pails.