It’s one of the most commonly asked questions – Where are milk prices headed?   Corey Geiger of Hoards’ Dairyman gives us some possible answers. 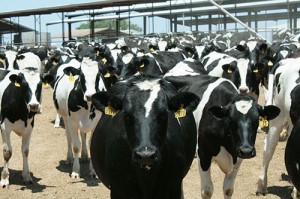 After falling over 40 percent from last year’s all-time peak, many are wondering where milk prices are headed.“We’ve had a big decline to normalcy,” stated Mark Stephenson of the University of Wisconsin-Madison when comparing milk prices from 2014 to 2015. “If you are concerned about milk prices this year, you better assess your long-term future in this industry,” advised Stephenson. “Last year was an anomaly. This year’s milk prices could be the new norm,” said the UW’s director of dairy policy analysis. As for near-term prices, there are more factors “pushing down” rather than “pulling up” prices.

The seven factors that could continue to cause lower prices include:

• China’s domestic milk production has been stronger this year.

• The slowing Chinese economy . . . while still robust by world standards, economic growth could slow to 7 percent after a decade-plus of double-digit growth.

• Russia had been the world’s second-largest dairy product importer next to China. That all changed this past year as economic sanctions against Russia, and Russia’s subsequent refusal to buy European Union (EU) and U.S. dairy products, caused its dairy product purchases to tail off considerably. Plus, the devalued ruble buys fewer dairy products.

• The U.S. dollar is strengthening, which means our products cost more for most international customers. “While the U.S. economy is still lackluster, we are the best looking horse in the glue factory,” commented Stephenson.

• The sunset of the EU’s quota this March could result in more milk and dairy products on the market.

• Lastly, there was a big spring flush of milk in the Northeast and Upper Midwest. That, combined with a diminished appetite for Southeast milk bottlers, has backed up many U.S. dairy processing facilities.

On the flip side, there are three key indicators that could pull milk prices higher:

• There has been a slowdown in western U.S. milk production as the national dairy herd contracted for the first time in March since November 2013. Higher-than-average culling has been taking place in California, Arizona, Idaho, Oregon, Washington, Texas and New Mexico.

• Strong domestic sales have been moving dairy products. Plus, March became the first month that Americans were spending more money eating out than at home. In restaurants, cheese, yogurt and butter are foods that regularly go into menu items.

• There may be potential for long-term dairy product import growth in North Africa and India.